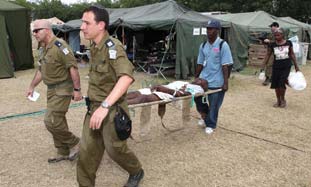 Jews who found shelter in Haiti when fleeing Nazi Europe recently launched a research project to map out their history.

Many Jews felt a measure of pride when they turned on their televisions to see IDF medical teams performing heroically amid the desolation following the January earthquake in Haiti, but for a small handful the sight evoked more than just pride – it was the “closing of a circle” that began more than 60 years ago. For those Jews, Haiti was more than a troubled Caribbean nation struggling against hunger and poverty and now disaster – it was the nation that saved their lives when they found door after door closed to them as they tried to flee Nazi Europe.

“I was four years old when I escaped from Germany and went to live in Haiti for a year, until immigrating to New York,” said Bill Mohr. “I do not know what would have happened if Haiti had not opened its doors to those fleeing the Holocaust. My mother’s mother and sister had found safe haven in Portugal, while my mother’s younger sister was caught and spent the war in Auschwitz.”

When Haiti resurfaced in the headlines following the deadly earthquake, Mohr was moved by a desire to learn more about the country that had provided his family, together with approximately 300 other Jews, a shelter from the disaster looming in Europe. Together with his wife, Harriet, Mohr began a massive research project, and the two found that historical documentation of the refugee community in Haiti was minimal. Gathering scraps of information from survivors and archives, the two are still trying to put together a complete picture of the tiny Jewish community that swelled with the arrival of the European immigrants, but declined as Haiti’s fate turned in the postwar years.

The Mohrs hope to mount exhibits and collaborate on further projects to preserve and commemorate Haiti’s Holocaust history, and have set up an e-mail address – HaitiHolocaust@aol.com – in the hopes of gaining as much information as possible regarding the Jewish community, particularly the refugee community, on the island.

MOHR’S TIES to Haiti began late in 1938, following Kristallnacht. His father, Ernst, was arrested on November 10, and held at Dachau until the end of December. Mohr’s mother, Auguste Midas Mohr, recalled years later that “he had nothing on except for pajamas and they had to stand at attention in the cold, and he always said he was so afraid he would lose his glasses. Without his glasses, he would’ve been lost. He kept them in his shoes at night and would retrieve them first thing in the morning.”

While her husband suffered in the cold and tried to save his glasses, Auguste “worked feverishly on our immigration to Haiti.” The family had an affidavit that would have allowed them to enter the US eventually, “but there were numbers given out but people could only come slowly into the United States when their number was called.”

“I went to Hamburg on the night train all by myself and I contacted our friend, the Haitian consul-general, Mr. Fouchard, who was a friend of all the people who were in the group of actors and actresses that dad knew so well, partly from Fuerth and Nuremberg, that were transferred and had taken jobs in Hamburg,” Auguste later told her daughter, Ruth, in a recorded oral history. At least one other family – the Meinbergs – specifically credit Fouchard for issuing the visas that saved their lives.

“He was one of this group and that’s how he knew dad and he was very nice to me and tried to help me,” continued Auguste. “I also visited a doctor there who gave me all the pointers on how to behave in the tropics, he gave me medication and he showed me how to wash the lettuce and the fruit. Then I went home again and things slowly developed, but I was alone and I had to do all that on my own.”

Once Ernst was released from Dachau, the family continued preparations and then left, with each of the four family members allowed to take 10 marks on the journey.

The family – Ernst, Auguste, five-year-old Ruth and three-year-old Bill spent 32 days on the high seas, traveling on the only company to include Port-au-Prince on its Caribbean route. The parents told each other that this was their last vacation, and Auguste recalled that “the children were very happy there and they ran up and down the ladder to the captain’s deck and the captain let them take the rudder.”

When the family arrived in the Haitian capital, Fouchard’s father had prepared a small house for them. They quickly settled in to a Haitian routine. Bill and Ruth played with the neighbors’ children, and the neighbors’ grandmother helped Auguste learn how to place orders from the market.

In the middle-class circle in which they found themselves, appearances were maintained even at what must have seemed like the end of the world. “The men wore white suits with white shirts and they always had to wear a tie in that terrible heat,” said Auguste. “The kids went to kindergarten and they learned French in no time.”

With no work and only 40 marks, the family struggled, even in the relatively cheap Haitian economy, to make ends meet. “With no money, we were invited to the wedding of the chef du protocol… My friend and my neighbor, Madame Moise, the wife of the doctor, made Ruth a little dress so she could be a flower girl. The dress was made out of one of the collars of my dresses. I wore my wedding gown that was dyed black and it was very cut out at the neckline,” Auguste later told Ruth. “I was sitting there in the church and one of those monks came by and said to me, I should cover myself. It was between Christmas and New Year’s Day and we were dancing there in the open air.”

Shortly after arriving, Ernst became very involved in the suddenly blossoming Jewish community. Auguste said that many of the Jews who had recently arrived came from Austria, and so all of the Jewish newcomers who joined the tiny community were known as “Austrians.” Then, as now, the Bigio family, a family that immigrated to Haiti from Syria at the beginning of the century, took the reins in organizing the diverse mix of Sephardi trading families and Ashkenazi refugees.

In February 1940, the Mohrs’ number finally came up and they were allowed entry to the US. They arrived in New York City in March, but Ernst still had one last promise that he had made to the tiny Haitian Jewish community. Serving as an emissary from the Port-au-Prince community, he went to plead its case for refugee aid before the American Jewish Joint Distribution Committee, seeking a subsistence stipend for the recently formed local branch of the organization founded to aid refugees. Apologizing that it could not afford more, the New York headquarters approved $50 a month for the Haitian branch, of which $47.49 of the first installment went to order and ship 300 pounds of matza from Horowitz Brothers & Margareten for the upcoming holiday.

Although he only spent one year of his life in the island nation, Bill Mohr has tried to contact other refugee Jews of Haiti to put together a more complete picture of the community that emerged there.

DAYS AFTER the earthquake, on International Holocaust Remembrance Day, the JDC described Haiti as “a legitimate source of inspiration,” explaining that “Haiti played a small, yet critical, role in saving Jewish lives during the darkest chapter in the Jewish story.” According to the organization’s records, starting in 1938, Jewish refugees from Central Europe emigrated, with JDC assistance, to Haiti. According to the JDC archives, by the time travel was rendered impossible with the outbreak of World War II, some 150 Jewish refugees had reached Port-au-Prince. The organization that Ernst Mohr helped build in late 1939, the Joint Relief Committee Haiti (JRC), financially supported around one-third of them.

“For some of these Jews, Haiti was a way station – a place of refuge before emigrating to the US. Others stayed. Their survival – and the lives of their descendants – are fitting reminders of how small the world is and how dependent we all are on the conscience and humanity of those with whom we share the planet,” concluded the JDC blog entry written in January.

Beyond the German and Austrian families that arrived in the late 1930s, historians note that at least one French Jew – Lucette Tardieu – also was given refuge in Haiti. Yad Vashem said that it was not aware of much available information concerning Haiti and the Holocaust, but that it seems there were a few Jews who resided in the Netherlands who held Haitian citizenship. Historians, however, have said that it is possible that the citizenship was forged.

Part of the confusion regarding Jewish immigration to Haiti stems from conflicting accounts regarding the conditions under which Jews arrived in the country. According to Beit Hatfutsot, “Although the Haitian government has traditionally frowned on white immigration, asylum was granted to refugees… Until 1938 immigration laws were benign, the only prerequisite being the possession of $100; as of that year the sum was raised to $1,000 and a government permit was required in addition.”

But other accounts claim that the sum was higher, and that absorption of refugees was simply a money-making venture on the part of the Haitian government.

Prof. David Bankier, of the Institute of Contemporary Jewry at the Hebrew University of Jerusalem, said that after 1938, “the cost [of a visa] was outrageous: If you wanted to go to Haiti, you had to pay $5,000.”

One surprising insight comes from the collected papers of the NAACP, in which Ed Mathon (identified as the director of “Radios-Electricite”), in a letter to NAACP executive secretary Walter White (January 13, 1941), said that “a couple of hundred Jews acquired Haitian nationality without going to Haiti” and “a great many Germans [Jews] came to Haiti as Haitian citizens” and “many wealthy Jews became naturalized Haitians.”

Others have argued that it took an act of the Haitian legislature to provide a loophole for Jews to meet the Haitian citizenship criterion of being of “African descent.”

Although the Jewish population of Haiti remained as high as 200 in 1957, the political climate, lack of economic opportunity and longing for a Jewish community on the part of Haitian-born Sephardim as well as the refugees, quickly took their toll. By 1970, around 75 percent of the Jewish population had left, mostly for the US, Argentina and Panama. According to the World Jewish Congress’s last count, in 1997, the permanent Jewish community of Haiti numbered 25, mostly still centered in Port-au-Prince.

The same Bigio family that organized the community at its peak is still active, owning the island’s only Torah scroll and serving as Israel’s consul to the troubled island. With history turning again full circle, it was George Bigio who offered his land to house the IDF field hospital that saved hundreds if not thousands in the earthquake’s aftermath.

The same field hospital that reminded Bill Mohr, thousands of miles away, of his own special connection to the island and launched the Mohr family’s crusade to make sure that Jews remember that decades ago, it was Haiti that saved Jewish lives.
(Tags: Haitian Jews, History, Holocaust)