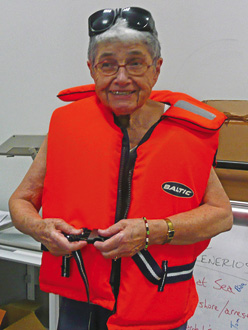 There is a tried-and-true Jewish method in Europe to garner instant media coverage and awards of recognition: Scream the trendy anti-Israeli slogans equating the Jewish state with Nazi Germany and the former apartheid regime in South Africa, while highlighting one’s background as a Holocaust survivor. According to seasoned media observers in Germany, the formula of Shoah survivor coupled with anti-Israeli activism helps to explain the public relations coup of Hedy Epstein, an anti-Zionist 85-year-old German Jew who fled the Nazis in 1939, and is now promoting her hunger strike in Egypt to advance the so-called “Free Gaza Movement.” Epstein declared her hunger strike on Monday, as part of a campaign involving 1,400 activists from 42 countries in Egypt hoping to enter Gaza, in a bid to compel Israel to end its restrictions on the Hamas-controlled Gaza Strip. She has attracted widespread press coverage in Europe. Prompting the activists, many of whom are from organizations affiliated with Hamas, to march into Gaza, is the one-year anniversary of the start of Operation Cast Lead to stop Hamas rocket attacks on Israel’s southern periphery. The European laws of supply and demand (similar ones apply on many American college campuses) show an endless demand for Jewish senior citizens willing to invoke anti-Israeli language that meets the definitions of contemporary anti-Semitism. According to a Jerusalem Center for Public Affairs report, Epstein had “compared Israel to a Nazi state and Israeli soldiers to Nazis” during a lecture at the University of California at Santa Cruz. Writing this past week from Beirut, the liberal Huffington Post site reported that Epstein said, “The issue for Israeli Jews and the American Jewish community is the Holocaust, and everything is due to the Holocaust. But Israel is not being persecuted now. Israel is the persecutor.” The US State Department and the European Union both define parallels between Nazi Germany and Israel as a form of modern anti-Semitism. To circumvent the unsavory Nazi-equals-Israel comparison, pro-Palestinian and anti-Israeli groups in Europe frequently outsource the new anti-Semitism to a minuscule group of anti-Zionist Jews who seek to strip Israel’s legitimacy as a nation. A Holocaust survivor as spokesperson helps to insulate the “Free Gaza Movement” from charges of anti-Semitism. The problem, however, for the anti-Zionist market is more a question of supply than demand. The fringe group of anti-Zionist Jews who fled the Hitler movement or survived the extermination camps are passing out of existence because of their age. Within the European Union, anti-Zionist Holocaust survivors hold enormous media and political currency. Telling examples are the 85-year-old Hajo Meyer, who argues that “the earliest cause for anti-Semitism is situated in Jewry,” and equates IDF checkpoints with Nazi actions. German President Horst KÃ¶hler last year awarded his country’s most important award, the Federal Cross of Merit, to 80-year-old hard-core anti-Zionist attorney Felicia Langer, a dual German-Israeli citizen who is widely sought as a lecturer in Germany and Austria because of her Israel-equals-apartheid views. German critics argue that anti-Zionist Jews such as Epstein, Langer and Meyer have cornered the European media and speaking-tour markets because they sanitize guilt in countries which are plagued by their complicity during the Holocaust. Epstein contributes, according to the social-psychology of post-Holocaust anti-Semitism, to depicting Israelis as the new Nazis and Palestinians as the new European Jews. The cottage industry of anti-Zionist Jews pushing, wittingly or unwittingly, a modern anti-Semitic agenda serves to cleanse the guilt pangs of a non-Jewish audience and turn Israel’s democracy into a pariah state. The “Gaza Freedom March” Web site in Switzerland wrote that in contrast to most Holocaust survivors, “Hedy Epstein is an advocate for the Palestinians.” The Shoah as a cynical form of moral shock therapy for Diaspora Jewry and Israelis remains a ubiquitous bully club to pit a clique of anti-Israeli Jews against the mainstream European Jewish community. Epstein told The Jerusalem Post last week that “when people are suffering it comes upon the rest of us to do whatever we can.” The pressing question for the critics of Epstein’s human rights activism is, why are she and other activists not engaging in a hunger strike for persecuted Iranians risking their lives for democracy on the streets of the Islamic Republic? Where are the hunger strikes opposing the Islamist Sudanese government-sponsored genocide against its black population in the Darfur region? The media appeal of catapulting Epstein into a poster girl for criticizing Israel’s right to self-defense in Gaza resonates with a European audience starved for moral exoneration because of its complicity in the crimes of the Holocaust.
(Tags: Holocaust, Anti-Semitism, Anti-Israelism)