Queensland Attorney-General Jarrod Bleijie said banning the Hammered music festival, is expected to draw white supremacists from Australia and overseas, is out of the question in the interests of free speech.

Bleijie was quoted by the Brisbane Times as saying that he was “disgusted” by the major white-pride event to be held in Brisbane this weekend, but added that “while the government does not condone neo-Nazi or extremist beliefs, it is not illegal to hold an event such as this.

“The Queensland government will not ban this festival, but any attendees who incite or commit violence or racism will be dealt with by the police,” he warned. 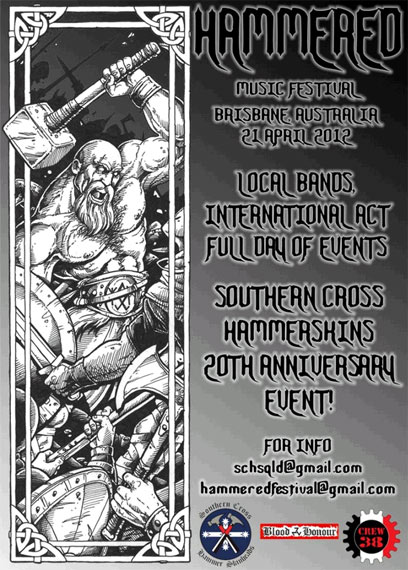 According to the Brisbane Times, former independent member for Burnett Rob Messenger, who launched a Parliamentary e-Petition against the “Neo Nazi, race hatred-inspired gathering,” said he was frustrated the views of nearly 2000 petition signatories had been ignored.

He claimed allowing Hammered to proceed made Queensland a national “laughing stock.”
“
The government, I believe, under current Queensland laws, has the ability to stop the rally,” Messenger was quoted by the Brisbane Times as saying.

“I believe that it breaches anti-discrimination (legislation) as it stands, but in the meantime, and at the very least, the (Attorney-General) should untie the hands of the Queensland police and allow them to investigate the concert promoters and their public advertising.”

The Brisbane Times said the Hammered Festival is organized by a group called the Southern Cross Hammerskins, a local branch of an international association spawned from the American white power skinhead movement.

This is the first year the three-year-old festival will be held in Brisbane, the report said, and websites promoting the event say it coincides with the 20th anniversary of the Southern Cross Hammerskins in Australia.