I am no fan of the current government, but its ambassadors should be accorded the same respect as those of any other country. 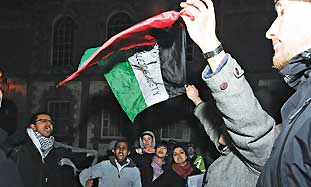 The two most prestigious universities in the UK, Cambridge and Oxford, were the scenes of some major anti-Israel sentiment last week. At Oxford, Deputy Foreign Minister Danny Ayalon was verbally threatened with anti-Semitic remarks during his speech at the Oxford Union, while the presence of Hamas activist Azim Tamimi, a supporter of terrorist activity, at a lecture in Cambridge gave rise to a high degree of anti-Israel sentiment.

At the same time as this was taking place, I was holding a series of meetings with British university principals and vice chancellors, meetings which have been going on for a number of years and are aimed at gauging the official position of the universities to the proposed academic boycott attempts. Over 30 of these meetings have taken place and, rather than focus solely on the negative, they have also been used to promote and strengthen both ongoing and new research collaboration and links between British and Israeli universities. This was partially reflected in last week’s reception hosted by the British Foreign Office for the UK-Israel bilateral research project BIRAX, funded by the Pears Foundation and with formal support of the British government and the British Council.

In the meetings, all of the university principals and vice chancellors state the same mantra, namely that they are opposed to any form of academic boycott, they reject any form of anti-Semitism (or any other form of racism) on their campuses and that they believe in the principles of free and balanced speech at their institutions. For most of them, Israel is simply not on their agenda as they struggle to deal with the economic recession and the government cutbacks in the funding of higher education.

ONE OF the universities most closely associated with anti-Israel sentiment in the UK is SOAS, the School of Oriental and African Studies, at the University of London. In recent weeks, it has hosted both Tamimi and the maverick UK member of Parliament George Galloway in public meetings which are not so much pro-Palestinian as they are anti-Israel and spilling over into blatant anti-Jewish sentiment. And yet SOAS has one of the few full chairs in Israel Studies which also arranges a diverse and well-balanced seminar series on contemporary.

Israel, attracting top scholars and large audiences. The diverse participants ask hard questions but prove, time after time, that a civilized discussion can take place, providing that one is not out to promote their own political viewpoint in the guise of an academic lecture, as is too often the case with visiting Israeli or Palestinian speakers.

Israel’s ambassadors to the US and the UK have both been faced with hostile audiences at universities in these countries. Readers of this column will know that I have little sympathy for the policies of the present government as represented by its deputy foreign minister or its ambassadors, who do no more than state government policy, but that does not mean that they should not be accorded the same respect and attention that ambassadors of any other country are, including countries whose policies towards ethnic minorities and human rights are far more dubious than anything Israel has to offer.

THIS LACK of balance on campuses is feeding into the growing sentiment within the Anglo-Jewish community as a whole that anti-Semitism is on the rise and that it is increasingly difficult, almost impossible, to differentiate between criticism of Israel on the one hand, and anti-Semitism on the other. Not a week goes by without the two major UK Jewish newspapers – the Jewish Chronicle and Totally Jewish – reporting new incidents of anti-Semitism, many of them on university campuses.

That does not make it unsafe to walk the streets as a Jew or as an Israeli, nor has it resulted in a sudden desire to leave the UK for Israel or elsewhere. The community is well represented through a host of public organizations, it knows how to stand up for its rights, and is it not physically threatened as such.

And yet, one cannot deny the growing sentiment amongst British Jews that the atmosphere has changed – and the fact that much of it emanates from the bastion of liberalism and free speech on some of the campuses, rather than from the traditional right wing and fascists, makes it all the more difficult to deal with. Nothing different was ever expected from the racist right wing, but much more was expected from those places where free speech and balanced discourse is a basic principle of their existence.

The dissonance between what the vice principals and chancellors say in their private meetings with me and other representatives of Israeli universities, and that of their public actions and statements is becoming too large to tolerate. Academic freedom and the freedom of speech and debate is an important principle, a principle which cannot be discarded every time one disagrees with a particular political point of view expressed by a speaker. But academic freedom has its red lines, and this requires some form of balance in the presentation of diverse and contesting opinions.

The use of the mantra “academic freedom” or “freedom of speech” cannot be used as an excuse for the promotion of racism, anti-Semitism, incitement against ethnic or religious minorities, or the promotion of violence in any form, physical or verbal.

If the leaders of the UK universities wish to preserve the rapidly diminishing public reputation of their institutions, they need to act, and act soon to put their houses in order. They must draw the lines between acceptable academic discourse and difference of opinion, between those who would use their institutions as a guise for promoting unacceptable and dangerous views. and those who wish to undertake a harsh, but legitimate, criticism of the policies of this or that government.

They should actively promote those programs which bring the diversity of opinion before their student and faculty audiences. And while they should not give in to every attempt by external political and community lobbies to silence or ban speakers with whom they do not agree, they must become more proactive in ensuring that incitement, violence and hatred are excluded.

Recent events, such as those faced by Ayalon at Oxford, or Michael Oren in the US, do not bode well for the reputation of these universities and it is in the self-interest of the university principals, regardless of their own personal views concerning the Israeli-Palestinian conflict, to ensure that the principles of civil discourse are maintained. Failure to do so will, in the long term, damage the reputation of some of the world’s most prestigious institutions.

The writer is professor of political geography at Ben-Gurion University and editor of the International Journal of Geopolitics.