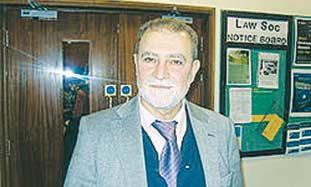 LONDON – A Hamas supporter who condones suicide bombing spoke at Cambridge University on Monday evening, days after a talk by Ben-Gurion University professor Benny Morris was canceled after he was accused of Islamophobia and racism.

Azzam Tamimi, founder of the Institute of Islamic Political Thought, was the guest of Cambridge University’s Islamic Society and spoke on the situation in Gaza post-Operation Cast Lead. Last week, the Islamic Society wrote to the student union asking it to take a stand and show it was serious “in opposing bigotry and Islamophobia,” saying Morris’s views were “abhorrent and offensive.”

Taking into consideration the sensitivities’ of students who opposed the Morris talk, Cambridge University’s Israel Society called off the event.

Last month, Labor MP Denis MacShane, the former chairman of the All-Party Parliamentary Inquiry into anti-Semitism, criticized a decision to allow Tamimi to speak at Birmingham University. He accused Tamimi of “glorifying jihad and the killing of those opposed to his fanatical Islamist world view.

“Should your campus be used as a platform for someone linked to Jew-hate and incitement to terrorist acts?” MacShane asked.

In a BBC interview in 2004, Tamimi said that given the opportunity, he would carry out a suicide bombing against Israel.

“You see sacrificing myself for Palestine is a noble cause. It is the straight way to pleasing my God and I would do it if I had the opportunity,” he said.

In the same interview, he said Israel should not exist.

In 2008, he asked Israeli academic Yossi Mekelberg, of Regents College, London, on Iranian news channel Press TV why the Palestinians were paying for the crimes of the Nazis, and suggested he go back to Germany.

“Justice? You go back to Germany. That’s justice. You turn Germany into your state, not Palestine. Why should Palestine be a Jewish state?” Tamimi said.

“If the Nazis killed the Jews in Europe, why should the Jews come and live in my mother’s house, on my father’s land? If that is extremism, then I am an extremist. If that is terrorism, then I am a terrorist… I don’t give a damn about the future of Israel, and yes – I want to see Israel come to an end,” Tamimi said.