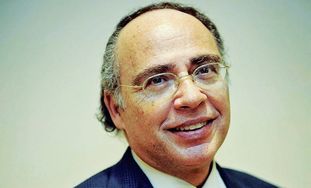 Dr. Dieter Graumann, the president of Germany’s Central Council of Jews, on Monday slammed Aachen Mayor Hilde Scheidt for her defense of an anti-Semitic, anti-Israel cartoon and her efforts to denigrate two prominent German-Jewish writers because they criticized modern anti-Semitism and radical Islam.

In an exclusive statement to The Jerusalem Post, Graumann wrote in connection with the Green Party’s Scheidt, “Accusing someone of right-wing radical incitement because he criticizes a disgusting, anti-Semitic caricature and denounces the fact that it is tolerated under the pretense of criticism of Israel makes the accuser culpable of failing to act against anti-Semitism, of inverting the facts, of unreliability in the struggle against hatred and violence.”

The cartoon depicts a man sporting a Star of David on his bib as he devours a young Palestinian boy with a fork draped in an American flag and a knife with the word “Gaza” written on it. A blood-filled glass sits next to the plate.

Scheidt defended the cartoon late last year. “It must also be possible to criticize the policies of Israel — and a government that damages the Israeli people,” she said.

She told the Aachner Zeitung newspaper that Broder invoked “malicious agitation” against critics of Israel, including Walter Herrmann, the initiator of the Cologne “Wailing Wall.” The Cologne exhibit in the heart of the city’s bustling pedestrian zone showed the anti-Semitic cartoon.

Scheidt mounted a campaign in the local press to prevent Broder and Giordano from speaking in Aachen, including leveling, according to critics, a classic expression of German anti-Semitism against Broder, saying he sows discontent in the Federal Republic.

German observers of the local press told the Post that the Aachen news outlets served to advance an anti-Jewish campaign against Broder and Giordano, as well as one-sided attacks on Israel.

Scheidt said that another reason she resigned from DIG was because Broder had said that in Aachen there is an “alternative red pack peace movement that always demonizes Israel.”

Broder was alluding to the Aachen Peace Prize group, which has awarded prizes to haters of Israel, and of which Scheidt has long been a member.

Drehmann, who said he was speaking for the head of community, Dr. Robert Neugröschel, termed Scheidt’s efforts to label Broder and Giordano as rightwing as “ridiculous and naïve.”

He continued that both authors are “famous personalities” and are in no way to be described as right-wing.

Drehmann said Scheidt’s position on Israel and the German Jewish authors was “not smart” and that she fails to understand Israel’s security interests.

In an e-mails to the Post on Tuesday and Wednesday, Scheidt wrote, “I would like to sharply reject the accusations leveled against me by Mr. Broder and others, because they are without merit. I have publicly voiced my criticism of DIG many times and do not wish to repeat it.”

Scheidt added that she had “sharply criticized the cartoon” demonizing Jews and Israel and resigned from the board of directors of the Aachen Peace Prize club.

Dr. Elvira Grözinger, a member of the German branch of Scholars for Peace in the Middle East (SPME), which aims to present a balanced view of the Israeli-Palestinian conflict, told the Post on Monday that Scheidt’s approach is “anti-Semitism with a detour” because she blasts the Israelis but really means Jews.

Broder told the Post on Wednesday that Scheidt is a “Green anti-Semite” and Aachen is contaminated because of her diatribes.

Broder writes for the daily Die Welt and is one of Germany’s leading authorities on contemporary anti-Semitism in the country.

Scheidt declined to answer Post questions about allegations that she has failed to fight the rising level on neo-Nazi activity in the Aachen area.

One member of the Aachen Jewish community told the Post that Scheidt is bashing Israel because she wants to please the German Turkish population and secure votes for her party.