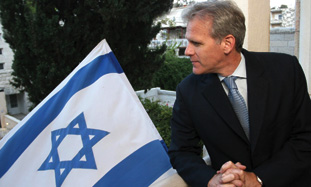 Those who support freedom of expression must speak out forcefully against repeated efforts to shut down one side of the debate concerning Israel and the Middle East.

Over the past few weeks, anti-Israel activists have trumpeted their right to engage in offensive, even hateful anti-Israel speech during the so-called “Israel Apartheid Week” or “Hate Week.” Insisting on their own freedom to indulge in anti- Israel speech, college activists staged high-profile if unevenly attended events around the world, most notably at Harvard and the University of Pennsylvania. When pro-Israel speakers attempt to speak, however, these anti-Israel protesters often take the role of censors. On many university campuses, protesters try to shut down any event that is sympathetic to Israel. Fortunately, these efforts sometimes backfire.

Over the years, many lectures by Israeli officials and supporters have been canceled, delayed, or obstructed in the face of rambunctious protests. Last year, Ambassador Michael Oren’s presentation at the University of California at Irvine was notoriously disrupted by a dozen protesters who were eventually prosecuted for disorderly conduct.

Lately, such incidents have multiplied in a concerted effort to shut down pro-Israel activities. The goal of such protests is not merely to disrupt, embarrass, or discomfort pro-Israeli speakers but to silence them. “Ultimately,” as an activist at the University of Michigan admitted, “our goal is to prevent [pro-Israel speakers] from even arriving on campus in the first place and we feel confident that we will be able to accomplish this….”

This strategy was displayed recently at the University of California at Davis, where a handful of protesters disrupted a February 27 presentation on “Defending the Israeli Image,” featuring a former member of the Israeli Defense Forces and a Druse woman whose father and brother had fought in the IDF. The loudest of the protesters, an Indian man, called an IDF veteran a child molester and accused him of rape. The heckler announced, “I will stand here and heckle you until you leave… my only purpose is that this event is shut down.”

The heckler repeatedly demanded that security officials arrest him, taunting the crowd: “Remove me! Remove me! …I would love to be arrested.” Despite this plea, campus security permitted the disruption to continue for quite some time, telling retired faculty member George Rooks, “We have been instructed by our superior not to stop hecklers, and if you try to stop the hecklers, we have been instructed to close down the program.” Finally, after the disruption became prolonged, the security officials escorted the heckler out of the room.

Under pressure from the Amcha Initiative, a pro-Israel group co-founded by University of California professors Tammi Rossman- Benjamin and Leila Beckwith, the university leadership finally condemned the disruption as “reprehensible.”

“Attempting to shut down speakers is not protected speech,” wrote UC President Mark Yudofin an open letter to the UC community. “It is an action meant to deny others their right to free speech.”

Significantly, the disruption pushed President Yudof to be uncharacteristically blunt in condemning anti-Israelism in his university system. Yudof blasted not only the Davis heckler’s insults but also the vandal who recently defaced an Israeli flag at his university’s Riverside campus, comparing these incidents to an ugly incident of anti-black racism that his university faced last year.

Yudof’s message was a welcome change from an administrator whom some Jewish groups had criticized for failing to forcefully confront anti-Semitic incidents that have led to federal investigations and lawsuits at his university’s Berkeley, Irvine and Santa Cruz campuses. In a sense, the lasting impact of the Davis heckler’s disruption may be that he has helped to stiffen opposition to these outrageous situations.

There are several lessons to be drawn from this. First, those who support freedom of expression must speak out forcefully against repeated efforts to shut down one side of the debate concerning Israel and the Middle East. Second, university administrators need to provide appropriate security for campus events, training officers and guards how to tell the difference between speakers and hecklers.

The initial reaction by Davis security is simply unacceptable. Third, the community should treat these incidents as a teachable moment. It is significant that administrators who are otherwise reticent to address even gross anti-Israelism may speak forcefully when the anti-Israelists try to shut down pro-Israel speech. They may just need a little push now and then.