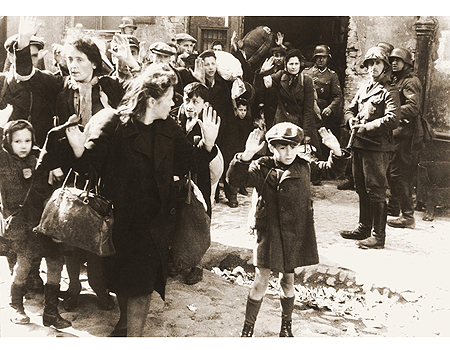 “The Holocaust is a gigantic imposture, the greatest lie of modern times.” This is how Robert Faurisson, known as “the dean of deniers,” refers to the Shoah in an article published by Rinascita, a national daily newspaper financed by Italy’s government.

Isn’t Holocaust’s denial going mainstream if even an Italian publication sees no problem in running an article about “disinfectants such as Zyklon B”?

Holocaust perversion is like the flower of evil, the sign of a rising anti-Semitism. In Italy, a jarring 44% of citizens are “prejudiced or hostile towards Jews,” according to a new study released by the Italian Parliament. A large group of public figures from across the political spectrum signed a petition titled “Hands Off Iran,” which referred to the “so-called Holocaust.”

Writers, politicians and journalists have been named on a hit-list as “slaves of the Jewish mafia” by a website called Holywar.org, illustrated using pictures of handcuffs made in the shape of a Star of David (the author of this article is also on the list.)

A few days ago, on the eve of Remembrance Day, an Italian judge condemned a journalist who denounced as anti-Semitic a cartoon, entitled “Fiamma Frankenstein,” depicting Italian MP Fiamma Nirenstein, who is Jewish, with a hooked nose, the symbol of fascist Italy and the Star of David.

The phenomenon goes back to Giorgio Forattini, Italy’s leading political cartoonist, who in a 1982 caricature showed former Israeli Prime Minister Menachem Begin dead, hanging from a Lebanese cedar with 20 coins falling off his body (in reference to Judas Iscariot’s 30 shekels.)

Italy’s media too is becoming more and more anti-Jewish. Sergio Romano, a former ambassador and editorial contributor to the most important Italian newspaper, Il Corriere della sera, claimed that the memory of the Holocaust is used by Israel as a diplomatic weapon, while Israel itself is “a war-mongering, imperialist, arrogant nation” and “an unscrupulous liar.”

Barbara Spinelli, the leading journalist for La Repubblica daily, wrote that “Israel constitutes a scandal…for the way in which Moses’ religion inhabits our planet.” She also attacked the “dual and contradictory loyalty” of the Jews.

During Operation Cast Lead in Gaza, Catholic Bishop Luigi Bettazzi declared: “To the Israeli friends I say: Be aware that one day it will be said that the Nazis have been exceeded, that they killed 10 for every one of them and you killed a hundred.”

When in Europe people are again starting to deny or pervert the Holocaust, there are just two possible reactions: Being concerned or complacent. As happened 70 years ago, that’s the only moral distinction by which ordinary people and famous intellectuals will be judged. A sour rain is falling, once again, on our heads.