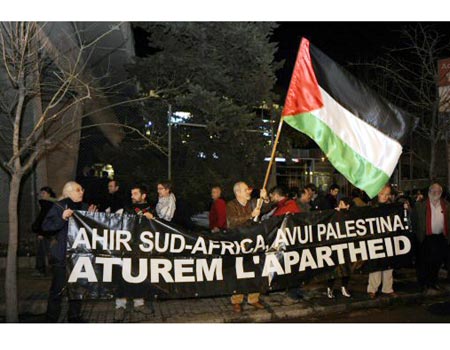 The University of Paris 8, formerly a part of the Sorbonne, has decided to cancel a conference that was scheduled to be held by a pro-Palestinian group at the establishment on Monday.

The group, Collectif Palestine Paris 8, initially received permission from the university’s president, Pascal Binczak, to hold the event titled “Israel: an apartheid state?” The authorization was withdrawn due to the concern that the event’s “highly polemic nature” could trigger “disturbances to the public order,” the school said in a statement released Sunday.

The university accused the organization of taking a radical stance on the issue and said that after offering the group an alternative option to the radical anti-Israel conference – such as holding a study day for a pluralistic public debate – the group refused.

The conference was supposed to debate new “social, historical and legal methods of internationally boycotting Israel.”

The Boycott Israeli Apartheid Campaign website said, “Is it no longer possible to exercise freedom of speech in French universities in relation to the field of the politics of Israel and Palestine? The cancellation of the upcoming conference is a clear demonstration of how the management of a public academic institution will yield to the injunctions and threats from a corpus that presents itself as the voice of the entire Jewish community in France but is in reality a mouthpiece for the Israeli embassy.”

“We ask the President of Paris 8 to reverse this decision and permit the conference to take place. Freedom of expression and academic liberties are far too precious to be smothered by intimidation campaigns,” the pro-Palestinian group said on its website.

Binczak published an article in the French newspaper “Le Monde” explaining his decision. He described some anti-Semitic incidents on campus, such as graffiti and signs linking the Jewish Star of David to a Nazi swastika. He further wrote that the group leaders were taking advantage of academic freedom.

Binczak added that the university would work to strengthen ties with both the Beit Berl College -located in central Israel – and al-Aqsa University in the Gaza Strip. He noted that he supports a political solution which will secure freedom to the Palestinian people.