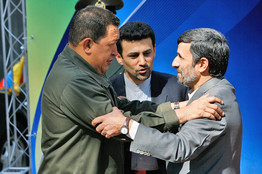 Sometimes I ask myself if Hitler wasn’t right when he wanted to finish with that race, through the famous holocaust, because if there are people that are harmful to this country, they are the Jews, the Israelites.

Meet one of Honduras’s most vocal advocates for the return of deposed president Manuel Zelaya to office. He’s not your average radio jock. He started in Honduran politics as a radical activist and was one of the founders of the hard-left People’s Revolutionary Union, which had links to Honduran terrorists in 1980s. A few years ago he was convicted and served time in prison for raping his own daughter.

Today Mr. Romero Ellner is pure zelayista, hungry for power and not ashamed to say so. This explains why he has joined Venezuela’s Hugo Chávez and Mr. Zelaya in targeting Jews. Mr. Chávez has allied himself with Iran to further his ability to rule unchecked in the hemisphere. He hosts Hezbollah terrorists and seeks Iranian help to become a nuclear power. He and his acolytes cement their ties to Iranian dictator Mahmoud Ahmadinejad by echoing his anti-Semitic rants.

The Honduras debate is not really about Honduras. It is about whether it is possible to stop the spread of chavismo and all it implies, including nuclear proliferation and terrorism in Latin America. Most troubling is the unflinching support for Mr. Zelaya from President Barack Obama and Democratic Sen. John Kerry—despite the Law Library of Congress review that shows that Mr. Zelaya’s removal from office was legal, and the clear evidence that he is Mr. Chávez’s man in Tegucigalpa. On Thursday, Mr. Kerry took the unprecedented step of trying to block a fact-finding mission to Honduras by Republican Sen. Jim DeMint, who is resisting Mr. Obama’s efforts to restore Mr. Zelaya to power.

Mr. Zelaya, recall, was arrested, deposed and deported on June 28 because he violated the Honduran Constitution. He snuck back into the country on Sept. 21 and found refuge at the Brazilian Embassy in the capital. Mr. Romero Ellner’s calumny against Jews was a follow-up to Mr. Zelaya’s claim that he was being “subjected to high-frequency radiation” from outside the embassy and that he thought “Israeli mercenaries” were behind it.

The verbal attack on Jews from a zelayista is consistent with a pattern emerging in the region. Take what’s been going on in Venezuela. In the earliest years of Chávez rule, a Venezuelan friend, who is a Christian, confessed his fears to me. “In his speech, he always tries to create hate between groups of people,” my friend told me. “He loves hate speech.”

For a decade, Venezuelans have been force-fed the strongman’s view of economic nationalism laced with this divisive language. Venezuelans are encouraged to seek revenge against their neighbors. Crime has skyrocketed.

The Jewish community has been targeted as Mr. Chávez’s relationship with Mr. Ahmadinejad has blossomed. In 2004, I reported on a police raid at a Jewish school for young children in Caracas. The pretext was a “tip” that the school was storing weapons. No weapons were found, but the community was terrorized.

In recent years, Venezuela and Iran have signed joint ventures estimated to be worth $20 billion. There are similar pacts, estimated at $10 billion, between Iran and Venezuelan satellite, Bolivia. Both South American countries accused Israel of genocide in Gaza in 2008 and cut diplomatic ties. Mr. Chávez’s tirades against Israel during that time emboldened his street thugs. In January 2009, vandals broke into a temple in Caracas and desecrated the sacred space with graffiti calling for the death of Jews.

New York District Attorney Robert Morgenthau recently gave a speech to the Brookings Institution in which he said “Iran and Venezuela are beyond the courting phase. We know they are creating a cozy financial, political and military partnership, and that both countries have strong ties to Hezbollah and Hamas.”

Iran has courted Honduras as well. When Mr. Zelaya was still in power, the Honduran press reported that his foreign minister Patricia Rodas met with high-ranking Iranian officials in Mexico City. That raised plenty of eyebrows in Central America.

Neither Venezuela nor Honduras has any history of anti-Semitism. But with Mr. Chávez importing Mr. Ahmadinejad’s despicable ideology and methods, an assault on the Jewish community goes with the territory.

Honduras recognizes that it was a mistake to deport Mr. Zelaya after he was arrested. But it argues that fears of zelayista extremism and use of violence as a political tool in the months leading up to June 28 provoked desperation. Mr. Romero Ellner—whose radio station was closed down by the government last week—provided exhibit A with his remarks. If the U.S. State Department is opposed to the exile, let it call for Mr. Zelaya to be put on trial now that he is back in Honduras. It has no grounds to demand that democratic Honduras restore an anti-Semitic rabble rouser to power.