‘The Trouble with Textbooks’ spells out flaws 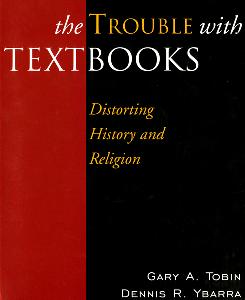 The Trouble With Textbooks by Gary A. Tobin and Dennis R. Ybarra has educators and parents looking deeper into the question of bias in school textbooks.

In 2004, the Institute for Jewish and Community Research, a San Francisco think tank, launched an effort to address “anti-Semitism and anti-Israelism” in American education, from K-12 to higher education. Its book, The UnCivil University, focused on the USA’s colleges and universities.

But the effort also gave rise to an extensive survey on the political, religious and social beliefs of university faculty — some of whom admitted to holding strong prejudices against evangelical Christians.

The researchers say they found a politically active, vocal minority — especially within Middle East studies departments — that held strong anti-Israel positions. Many of the same professors holding what the researchers found were strong political biases are often tapped to review K-12 social studies, history and geography textbooks, which explain religious history, among other topics, to very young children, the institute says.

So authors Gary Tobin and Dennis Ybarra looked at 28 textbooks over nearly five years — finding what they call “glaring distortions and inaccuracies,” many centered on the books’ treatment of Israel, Judaism and Christianity. Aside from their findings on how religions are treated, their new book, The Trouble With Textbooks (Lexington Books, $21.95), which appeared on shelves this fall, in part explores problems with the textbook approval process.

Ybarra talked with USA TODAY about issues around textbook approval:

Q: You say American textbooks are “flawed,” with many the product of “shoddy scholarship.” But isn’t there also a problem with the way the books are published and sold?
A: Textbooks are adopted at a statewide level in 21 states, including California and Texas. Developing a textbook and getting it adopted in these two major states is so expensive that only those competitors with the deepest pockets stand a chance to succeed.

Three mega-publishers control the K-12 market, meaning that more and more titles are concentrated in fewer hands. Errors in one book now stand a greater chance of replicating themselves across other books because they may originate from the same source.

Q: So how do special interests get their point across?
A: Through the state adoption process and local district textbook selection. It is so expensive to get a book into a classroom that publishers will do their best not to offend various user groups along the way. Publishers’ timidity and their reluctance to offend any group result in the dumbing-down of lessons to the lowest common denominator.

Shoddy scholarship also plays a role. Editors and publishers are simply not as vigilant as they should be, and are also under the impression that “experts” from university faculty are unbiased resources.

Q: So they’re not real experts?
A: Sometimes the well-credentialed scholars whose names appear as authors of the textbooks have little if anything to do with the actual writing or content of the book.

Prestigious names may have been at one point associated with the publisher. They may have provided an initial outline, provided a cursory read of the material, perhaps an edit, or they may simply have used their scholarly reputation to lend legitimacy to the textbooks.

The workhorses who actually write the text — whether they’re in-house writers or employees of a textbook development agency — may have a great deal or little expertise. Publishers also use “chop shops,” or development agencies, for a section or an entire book. Staffed mainly with educational specialists and writers, the agencies follow standards and guidelines supplied by the publishers, but subject-matter experts in history, religion, civics and so on can be notably absent.

Q: How can parents get involved if they have concerns about a textbook?
A: We strongly recommend that parents, educators and elected officials pay much closer attention to what is presented in social studies textbooks.

Statewide textbook adoption processes offer a good opportunity to become involved, but in every state, your local school district has a formal process for parental and citizen involvement in textbook selection.
(Tags: Religion, Textbooks, Research, Misinformation)