Yes, anti-Semitism is still a problem on campus

The authors of a new poll suggest that campus anti-Israelism have been with us since the 1950s, so there is no reason for undue concern. 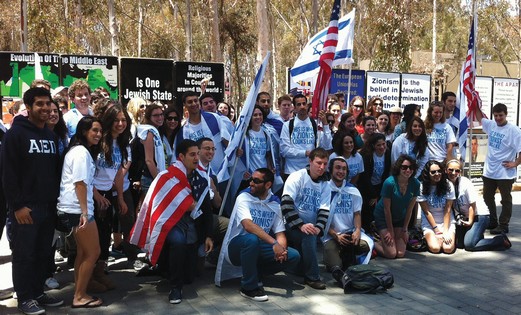 Mitchell Bard and Jeff Dawson’s new study, “Israel and the Campus: The Real Story,” led many newspapers to trumpet that anti-Semitism is not a problem on American campuses.

They pointed to the study’s finding that significant anti-Israel incidents occurred at only about three percent of schools, with most occurring in only a handful of colleges. But the headlines got the wrong take-away message from the study, given the implications of these numbers, the study’s other findings, and our experiences on the front lines of anti- Israel campus activism over the past 11 years. Fortunately, not all schools are a problem, but the challenge is serious and should not be minimized.

Nearly half of the students interviewed for the study – 43% – reported that anti-Semitism is a problem at their schools. The authors acknowledge this is a “shockingly high” level.

If a similarly high percentage of any other campus minority reported experiencing prejudice, most people would consider it unacceptable, and mobilize to take action.

The authors suggest that campus anti-Semitism/anti-Israelism have been with us since the 1950s, so there is no reason for undue concern.

But this long-range view misses the great difference between earlier decades and today. Israel simply had not been the burning issue on campuses in earlier decades. That changed abruptly in 2000 when Palestinians launched the terrorist war known as the second intifada.

The campaign came to be known as the new anti-Semitism, with “Israel” replacing “Jew,” but with the same accusations, irrationality and fanaticism that characterized traditional anti-Semitism. In the West, its epicenter was college campuses. The Palestinian-Israel conflict became the most inflammatory campus issue, the focus of student activism and of panels, demonstrations and agitprop.

During the past decade, the anti- Israel campaign has become more organized, more savvy, and more aggressive, especially since 2005. Red lines have repeatedly been crossed.

Extremist views, such as calling for the destruction of Israel and blood libels, became more commonplace.

Many pro-Israel students tell our campus professionals that they have become too uncomfortable to openly admit they support Israel. The study overlooks this progressive radicalization of dialogue and atmosphere.

The study seemed to suggest that anti-Israelism on campus is not so serious because there were only 674 incidents from 2010 to 2011, and they were clustered in the spring.

This number, which in any case is unacceptably high, doesn’t accurately reflect the situation.

Anti-Israel agitation usually erupts when Israel undertakes defensive military operations, but there were no such operations in 2010-2011 that could be used to rally anti-Israel followers. In addition, the Arab “spring,” and especially the carnage in Syria, diverted focus away from Israel.

Another factor may have been the University of California’s new, unequivocal rebuke of anti-Israel extremists who try to shut down pro- Israel events. This may have temporarily subdued anti-Israel activists at the UCs and other campuses.

Nor should we take comfort from the finding that anti-Israel events occurred at “only” 108 out of 4,000 schools, and that one-third occurred at only 10 schools. These were not obscure schools. The list included some of the largest, most prestigious and influential schools in the country: Harvard, Columbia, four University of California campuses including UCLA and the University of Maryland.

Activities at these schools make national media headlines. When an anti-Israel student wrote a Harvard Crimson op ed in October that accused Israel of deliberately preventing SAT tests from reaching Palestinians in Ramallah to deprive them of educational opportunity, the incident hit mainstream newspapers.

The US State Department itself felt compelled to publicly explain that the tests had been held up in customs because the office was closed during the Jewish holidays, and the test had simply been rescheduled.

Indeed, anti-Israel activists try to get their events and propaganda associated with big-name schools. In November, for example, Students for Justice in Palestine will hold its second national convention at the University of Michigan. One of the scheduled sessions is a video conference with Khader Adnan, a West Bank leader of Palestinian Islamic Jihad who had been caught on tape in 2007 inciting a crowd, saying, “Who among you will be the next suicide bomber?” The campus study reports that student government resolutions calling for divestment from companies doing business with Israel have been defeated at all but one school. This is good, but not reassuring. The purpose of such resolutions is not passage, but rather forcing debate to spread anti-Israel canards and make them seem familiar and even normal.

The study cites Dr. Sam Edelman’s observation that, “The delegitimizers have adopted Nazi Julius Streicher’s strategy of throwing mud at Israel in the expectation that some of it will stick.”

In addition, pro-Israel students had to devote enormous time and effort to counter these resolutions, which were only narrowly defeated, and Jewish students keenly felt the fallout of embittered relations on campus.

More divestment resolutions and boycott efforts are expected for this academic year.

More importantly, as Bard and Dawson point out, the most serious problem is anti-Israel faculty. Their numbers have grown for several reasons: the vogue of post-modern, post-colonial ideology leavened with the Israeli “new historians”; active recruitment since 9/11 of faculty from the Middle East to teach about the region; and the Saudis’ infusion of hundreds of millions dollars to set up special Middle East study programs.

They hire other faculty who share their views. They use their classrooms and reading lists to spread their bias against Israel, sometimes bullying students in their classes who disagree with them. Students are captive audiences, and dependent on their professors for their grades.

The study indirectly suggests that these professors and campus activists may have had an impact: 25% of students interviewed believe Israel is an apartheid state; 48% are not sure whether Israel protects the rights of its Arab minority while only 10% said that Israel does protect minority rights.

It would be naive to minimize the impact these professors have on broader society. Their prestigious positions lend credibility to their op-eds, textbooks, books, speeches, tours and media interviews.

Many are involved in outreach programs to teachers in K-12 who take courses for continuing education credits, as they do at Georgetown University. Through these outlets, anti-Israel professors can normalize the worst canards against Zionism, Israel and Jews.

However, the situation is not all bleak. As Bard and Dawson point out, pro-Israel organizations and students have mobilized to respond. When StandWithUs started 11 years ago, Jewish students were stunned and had no idea how to counter anti-Israel allegations or the aggressive strategies of the anti-Israel activists and faculty.

That has changed dramatically.

StandWithUs was among the first groups that mobilized to empower students to defend Israel by providing educational materials, advocacy training, and support for their campus events. In many cases, the anti-Israel campaign backfired, producing pro-Israel student leaders motivated to teach their campus communities about Israel. Several organizations now work with these students. Some pro-Israel faculty have also stepped forward to insist on restoring academic and professional standards, and to sponsor Israel education events.

Despite the positive developments, we should not let misleading interpretations of the study or glib headlines lull us into complacency. The challenge remains, and we must do all we can to meet it. Israel and our pro-Israel students deserve no less.