A Detour to Akko’s Outdoor Market

On any expedition I try to find interesting outdoor markets to visit. Sometimes this means rerouting the entire trip to include them or cancelling what we originally planned. But it’s worth it.

Akko’s outdoor market (שוק עכו) was supposed to be a little detour along the way, but once there it was impossible to leave. There’s the smell of freshly baked pita bread, trays of golden baklava, piles of sweet figs, freshly squeezed pomegranate juice, around every corner there is something exotic and fresh.

The souk is very much the shopping hub of the community, retaining its authenticity despite the weirdly dressed tourists (that’s us!) juxtaposed against the ancient stone. The locals are busy with their own errands and rushed schedules, side stepping them to their favorite stalls. Others find shady corners to sip black coffee or take a nargila break. 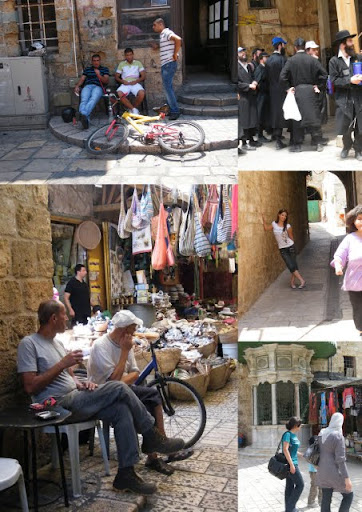 Merchants aren’t selling stuffed camels or rosaries like they do in Jerusalem’s old city bazaar (at least not as much of it), but real items of life- fresh seasonal produce, kitchen utensils, household paraphernalia. Diversity in the city is reflected in the market and alongside the usual fruits and vegetables there are those used in traditional Arab and Palestinian cooking. On display are tiny eggplants, gourds, spices, coffee, herbs and fresh olives. It is also possible to find ma’amoul molds and a special flat mold for making Asfar bread, one that is flavored with fennel seeds and colored with turmeric. 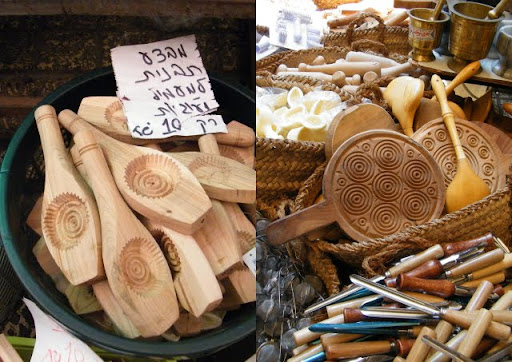 Arabs make up about 20% of the population of Akko and is one of the few cities of Israel, along with Haifa and Jerusalem where mixed populations coexist. Most of the Arabs and other minorities in Israel live in their own towns or villages, so there is very little contact with the various groups.

In Akko, the market brings everyone together, even if it’s more like a bottle of oil and vinegar that has recently been shaken. Many Arabs, especially those whose business depend on it, know enough Hebrew to speak it, sometimes without an accent. Although the secular Jews are taught Arabic from an early age (my two son’s are studying it now) it is often dropped in later stages in favor of English, French or even Chinese as the foreign language of choice. Many things are beyond the control of the ordinary person but having a common language helps create a connection, however small. Like my husband’s Egyptian grandmother used to say “every language is a friend”.
(Tags: Israel, Food)