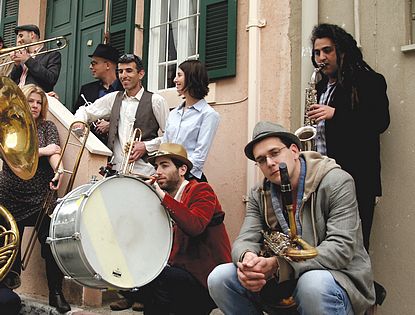 Marsh Dondurma is Israel’s first all-acoustic brass band, drawing on everything folksy, from polka and klezmer to the melodies of the Balkans, Africa and Cuba.

Dotan Yogev clobbers a snare drum strapped to his narrow hips. At his side, Udi Raz’s long, thin braid swings through the air as he honks on a sousaphone, its oversized brass horn towering above his head.

It’s the end of a concert at The Lab, a trendy club and theater in Jerusalem.

Outside the weather is cold, but there’s no room to breathe on the dance floor, where Yogev, together with the other 13 members of his troupe, Marsh Dondurma, have descended from the stage to swing their trumpets and pump their trombones directly into their audience. The crowd, mostly 20- somethings, includes the well-dressed and hopelessly unfashionable, the secular as well as the men trailing the white strings of tzitzit (ritual fringes worn by religiously observant Jewish males). Everyone is redfaced and sweaty – they’ve been dancing since the opening notes, hours ago.

Marsh Dondurma means “the ice cream of Marash,” Turkey’s famous ice cream-producing region. Yogev picked the name for the band after he ate a lot of ice cream on a trip to Istanbul, shortening “Marash” to “Marsh” to echo the marching band tradition.

In March, the band celebrated its sixth birthday. Marsh Dondurma regularly headlines concerts in Jerusalem and Tel Aviv. In November 2010, the Ministry of Foreign Affairs flew the entire band to a festival in China. They were a guest act at the 2007 Montreal JazzFest, and last summer they played at the Red Sea Jazz Festival in Eilat.

“They are the only band that sounds the same on stage and in the street” in Israel, says Ofer Tal, founder of The Apples, a funk music band. Tal is currently compiling a CD of Israeli funk music, including a remix of a Marsh Dondurma track. “The beauty of Marsh Dondurma’s music is that they take from Arabic motifs, and some oriental motifs, some Dixieland motifs and funk motifs, and play them with their brass and drums, and it always sounds like a brass band,” he says.

Yogev tells The Jerusalem Report that he wanted to offer a secular version of the joyous music of the religious Jews from the Breslav Hasidic sect, who often park their white minivans decorated with portraits of rabbis and blare liturgy to electronic melodies while their followers dance in the streets.

Marsh Dondurma includes four drums, four saxophones, three trumpets, two trombones, and one sousaphone – not one of which requires electricity. “That’s the magic,” Yogev says. “It takes three minutes to take the instruments out of their cases and you’re ready to go.”

That mobility has given the band flexibility for musical stunts. On Marsh Dondurma’s fourth birthday, the musicians played a floating concert in boats on Tel Aviv’s Yarkon River. Last March, they organized a flash mob, when a large group of people played a short, choreographed dance in a public space with no warning. Yogev wore a white suit as he played his signature snare drum and brass players swung their trombones and trumpets from side to side as scores of Jerusalemites bounced through a line dance on Ben Yehuda street The group, one in a growing list of Israeli bands driven by horns, collaborates with some of Israel’s top musicians. The presentation is informal, with Yogev conducting with a drumstick while sweat drips off his shaggy brown hair. But the band is made of experienced musicians. They share the task of composing new music, and the songs vary widely, reflecting their eclectic taste. To date, they have recorded three albums. Each one is more polished than their last, evidence of the growing unity and skill of the 14 members.

“Hadera,” composed by sousaphonist Udi Raz, is a klezmer-heavy song that begins with melancholy, wallowing wails on brass but climaxes in a rollicking saxophone solo.

The variety Marsh Dondurma pumps out during a concert keeps the audience guessing about which style will be next, but the overarching sounds of the trumpets, trombones and saxophones hold the pieces together as a work.

Yogev, 29, has played drums since grade school. He first heard the exuberant sounds of a marching band in New York City, where he worked as an au pair seven years ago. Each night, he would go out to hear live music, ranging from jazz to cabaret, from well-known acts to starting musicians.

After one concert, Yogev recalls, “We finished clapping and all of a sudden there were 20 players and the whole place filled with ecstatic noise.” He had been listening to the Brooklyn-based Hungry March Band, which bills itself as “a blazing parade of flesh, blood, steel, brass and wood.” Yogev begged them to join, came to a trial rehearsal, and spent the next four months playing drums with them across New York, including at a 24-hour dance party and a wedding held on the street of a Brooklyn industrial zone.

“Playing with them was insane,” Yogev says. “They would do their rehearsals on the river bank in Williamsburg [Brooklyn], with the view of all of New York … Every performance was a new experience.”

Returning to Jerusalem at the end of his job, Yogev spent a year doing odd jobs.

But he could not stop reminiscing to his friends about his days pounding drums for Hungry March.

“Someone said, ’Enough, you always talk about it, do something,’” he says.

So he did. He recruited drumming friends and connected to brass players through acquaintances. At their initial rehearsal, eight players read off sheet music Yogev brought from Hungry March’s pieces. The band grew as players invited their friends.

Even though the group was new, the musicians were highly trained.

Sousaphonist Raz came from the Jerusalem Academy of Music and Dance. Others were teachers or serious hobbyists. Gradually, band members began bringing their own compositions to the weekly meetings.

Two months after their first practice, the band debuted at a city-sponsored festival for Tu Bishvat, the New Year for Trees, held in Jerusalem’s Mahaneh Yehuda vegetable market in 2005. “We played for two hours,” Yogev remembers. “We repeated songs. At that point we only knew about six.”

Yogev says that while he knew the feeling of starting street parties from his time with Hungry March, it was new for the rest of the players. “They saw the power of music when it’s in the street,” he says. “It influences everyone, and for the first time we understood what Marsh Dondurma the band is.”

ACCORDING TO MUSIC REsearcher Edwin Seroussi, who heads the School of the Arts at the Hebrew University of Jerusalem, Israel has other marching bands – but they are in the army and police. Marsh Dondurma drops the regimented structure while keeping the instruments cordless Seroussi says he first noticed the band at a wedding three years ago. “After the huppa [ceremony] all of a sudden they came from out of nowhere and played and people danced all around them,” Seroussi says. “This is totally unusual in Israeli weddings. There is always a stage… [But Marsh Dondurma’s] whole thing was acoustic. There were no microphones, where you go to a wedding and come back deaf.”

Yogev says Marsh Dondurma is more structured than Gypsy bands, with each player having specific music to play rather than improvising. But they honed their Balkan spirit at a four-day Gypsy music festival in Serbia in summer 2006, which they attended with support from the Foreign Ministry and a Serbian-Israeli foundation.

Marsh Dondurma’s mobility sets it apart from other bands that lean on horns. Tal, who founded The Apples, says his band led a parade down Tel Aviv’s central Rothschild Boulevard years ago. “We tried to dress up as a marching band, but we are not,” Tal says.

“At the end, there were turntables and a double bass waiting for us.”

Yet if Marsh Dondurma’s acoustic approach is unique in Israel, the spirit of a large group with a heavy brass section is growing more popular. The Apples, a nine-member band, preceded Marsh Dondurma.

“It’s something that happened in the last 10 years.

More bands are bringing in the big brass,” Waidman says. “There’s a metallic warmth you don’t get in a guitar or in a piano.”

Alongside the pumping horns, strong tones of klezmer music connect Marsh Dondurma with the eastern European Jewish musical tradition, especially in two songs based on music played at Mount Meron on the holiday of Lag Ba’omer, when religious Jews ascend to the northern Israeli site to dance and sing in honor of Rabbi Shimon Bar Yohai.

Yogev emphasizes that Marsh Dondurma’s repertoire is wider than just Jewish melodies. “We are a band looking deep into our musical roots for inspiration, but we are not trying to be a 100-year-old klezmer band,” he says.

Most of the founding members have stayed with the band, even though half have moved out of Jerusalem. They return each week for rehearsals in the capital. Yogev says that when he started, he wanted to add vitality to a city whose young people fled during the Palestinian attacks during the second intifada.

Six years later, the capital has given its own flavor to Marsh Dondurma, which Yogev says has moved far away from its beginnings with Hungry March sheet music.

“We are something else completely,” Yogev says. “It’s something unique to here, to the people and atmosphere of Jerusalem.”
(Tags: Israel, Music, International)