A Safe Haven: Harry S. Truman and the Founding of Israel 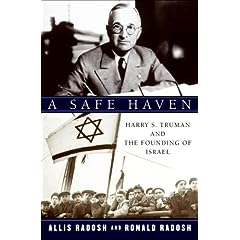 Product Description
On May 14, 1948, under the stewardship of President Harry S. Truman, the United States became the first nation to recognize the State of Israel—just moments after sovereignty had been declared in Jerusalem. But it was hardly a foregone conclusion that America would welcome the creation of this new country. While acknowledging this as one of his proudest moments, Truman also admitted that no issue was “more controversial or more complex than the problem of Israel.” As the president told his closest advisers, these attempts to resolve the issue of a Jewish homeland had left him in a condition of “political battle fatigue.”

Based on never-before-used archival material, A Safe Haven is the most complete account to date of the events that led to this historic occasion. Allis and Ronald Radosh explore the national and global pressures bearing on Truman and the people—including the worldwide Jewish community, key White House advisers, the State Department, the British, the Arabs, and the representatives of the new United Nations—whose influence, on both sides, led to his decision.