Ascending on high Down Under 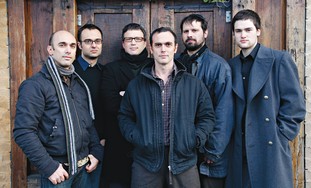 Let’s just say that you’ve probably never heard “Ma Nishtana” performed like this before. The traditional Pessah song is just one of the wellknown traditional tunes – others include “Erev Shel Shoshanim” and “Yedid Nefesh” – that the Australian Jewish Music Ensemble stands on its head through its jazz/world music/classical prism.

Using the basic song structures as a jumping-off point, the group, led by brothers Simon and Adam Starr, explore all avenues of improvisation and grooves on their way to forging a new Jewish music hybrid.

“Our goal is to revitalize this genre. There’s a lot of Jewish jazz out there, but I haven’t found anything like what we’re doing,” said Simon Starr last week ahead of the group’s concert tonight (Monday) at Beit Avi Chai in Jerusalem.

“John Zorn is more quirky, presenting the darker side, and there’s lots of mizrahi Jewish music, but I haven’t noticed anyone doing modern jazz with classical arrangements as a vehicle for playing Jewish music.”

The 38-year-old Starr, who immigrated to Israel last year from Melbourne, has been working as a professional musician for over 20 years, playing his own rock music and touring as a bass guitarist with Australian artists like James Morrison, and The Black Sorrows. But he gave it all up for life on Kibbutz Ein Gev on the Kinneret, along with his wife and three children.

“We had a great life there, but more and more [we] wanted to live here,” said Starr. “My family were Zionists, halutzim involved with setting up Rosh Pina, so the pull here is very strong in my family. Israel is so different than Australia – intense, creative and crazy. Australia is so predictable.”

In Melbourne, Starr also played his own jazz-tinged music, and along with his guitar-playing brother began performing at corporate and family functions, including many Jewish-based affairs. The concept of the ensemble rose out of the brothers’ attempts to freshen up the well-worn material.

“Because we were playing a lot of Jewish functions, we thought it would be interesting to put together some jazz arrangements of Jewish music. We put on a few shows in Melbourne and they were massively received,” said Starr. “We decided to start an ensemble to explore the music more thoroughly. As part of that, we began approaching elderly members of the community and asked them for their oral musical history. We recorded bits of Yemenite music, of someone reading Torah with a melody that was used in Iraq only on the high holidays, and we turned them into pieces of contemporary music.”

That might be easier for the Starrs than for you or I – Simon is currently working on his Masters in composition and Adam, also in Israel for a year, is studying for his Doctorate in composition.

THE STARRS’ Jewish music project resulted in an album called Pazit – recorded before Simon made aliya – which brought all the influences together into a melting pot.

“Both of us have a background in jazz, classical and popular music,” said Simon. “We tried to arrange the songs in chamber music style, not like having the jazz musician playing quickly in order to get to the solo. So there’s still a jazz feeling of exploration but in a more fixed arrangement.”

Since their arrival in Israel, the Starrs have formed an Israeli version of the Australian Jewish Music Ensemble, and have begun performing around the country, including shows at Shablul in Tel Aviv and The Yellow Submarine in Jerusalem. Among the musicians are Anat Fort on piano, Amir Bressler on drums, Kobi Salamon on woodwinds, and Gershon Waiserfirer on trombone, oud, and darbuka.

“It’s so exciting because they have such great depth musically. There’s so many great musicians here, I feel like I’ve barely scratched the surface,” said Starr. “Anat Forte is signed to a major jazz label, Amit is playing with Avishai Cohen, and Kobi is a jaw-dropping virtuoso – they’re musicians as good as any I’ve played with anywhere. And it’s exciting to develop the music here with some Israeli input – it’s sort of a cultural exchange.”

And the notion of secular Israeli jazz musicians playing Jewish liturgical music hasn’t been as far-fetched as it may seem, with the local musicians building on the Starr’s enthusiasm and taking the vibe even further.

“I would say the Israeli musicians in the band are connected to the music and can add layers to it because of their full engagement,” said Starr.“When we recorded Pazit in Australia, our pianist in Melbourne played this lullaby – “Mama Yo no Tengo Visto hit Rag’ut” – that his grandmother, an Egyptian Jew, had sung to him when he was young. When we brought it to the band here, Anat heard it and said she knew it as well. So there’s an emotional resonance there for the musicians.”