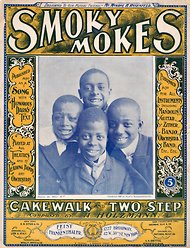 Framed sheet music has been hung throughout the Harlem restaurant Settepani, and the song titles and graphics at times caricature African-Americans.

One 1898 cakewalk is called “Who Dat Say Chicken in Dis Crowd.” The music for a 1918 number, “Somebody’s Done Me Wrong,” is illustrated with a black pastor who has a gun concealed in his pulpit and is glaring balefully at his congregation. John T. Reddick, a Harlem historian who is African-American, has spent three years assembling the memorabilia on view. He has also pieced together how the neighborhood’s black composers, performers and music publishers collaborated with Jewish counterparts to sell ragtime, jazz, blues and patriotic marches.

The show (through Feb. 28), “Harlem’s Black and Jewish Music Culture 1890-1930,” is meant to demonstrate “a dialogue between like-thinking minds,” Mr. Reddick said during a recent preview.

He has pored over Manhattan directories and countless Web sites to determine which performers lived and worked side by side. One cluster of sheet music at Settepani covers the career of the composer Abe Holzmann, who studied with Dvorak alongside black composers and musicians like Will Marion Cook and Harry T. Burleigh. Holzmann’s output ranged from cakewalks to a presidential campaign march, “Get on the Raft With Taft.”

Songs that now sound offensive, like “The Darktown Strutters’ Ball” and “Dat’s Harmony,” reflect the composers’ understanding of their audience, Mr. Reddick said. “They’re playing to a stereotype,” he added, like contemporary hip-hop artists who have college degrees and stable families but pretend to be disaffected gangsters onstage.

Mr. Reddick will be leading music-theme weekend walking tours (offered through Harlem One Stop), starting at Settepani and winding past town houses, tenements and theaters where blacks and Jews rehearsed, recorded and performed.

Before the Civil War, Kentucky cabinetmakers blended East Coast and Gulf Coast furniture fashions into a regional hybrid. The Museum of Early Southern Decorative Arts, in Winston-Salem, N.C., just paid an undisclosed sum in the six-figure range for one of the Kentuckians’ most famous chests of drawers.

The late-18th-century unsigned piece, made of cherry and tulip poplar, has bellflower and scallop inlays and flared cabriole supports that scholars call “bandy legs.” The craftsmen, probably based in Lewisburg, used inlay motifs popular around Baltimore and Charleston, S.C., and borrowed cabriole forms from New Orleans traditions.

The museum’s acquisition appeared on the cover of a 2000 book, “The Tuttle Muddle: An Investigation of a Kentucky Case-on-Frame Furniture Group,” published by the Headley-Whitney Museum in Lexington. The authors, Marianne P. Ramsey and Diane C. Wachs, found the names of a few woodworkers who could have produced the cosmopolitan dresser, including Gerrard Calvert, Peter Tuttle and John Foxworthy.

Clifton Anderson, an antiques dealer in Kentucky, owned the piece for about 25 years before selling it to the museum. Its maker, he said in a recent phone interview, “could have been a journeyman that traveled.”

The piece goes on view Friday, along with a handful of curvy-legged works by the Tuttle circle. The other major group of Kentucky furniture in institutional hands belongs to the Speed Art Museum in Louisville, which is closed for a multiyear renovation and expansion.

Alan J. Kanter, a retired food-distribution executive in Aventura, Fla., has long covered his walls with early-1900s posters for magicians. The performers commissioned portraits of themselves seeming to sever heads and coax witches out of caldrons.

Mr. Kanter, 65, also spent decades trying to develop a museum, theater and hotel with a magic theme, where he could display his collection. He considered sites in New York and Los Angeles, but could find no major backers.

“I could never get enthusiasm on the part of other collectors to throw in with me and really pursue this,” he said in a recent phone interview. He added that he was selling the posters now partly because of health problems.

Previews start on Friday for a Sunday sale of about 60 posters from the Kanter collection, organized by Guernsey’s auction house in Manhattan. Estimated at a few hundred dollars to $85,000 each, they show renowned magicians like Harry Houdini and Harry Kellar escaping from chains, freeing clouds of white pigeons from baking pans and taking advice from red imps. 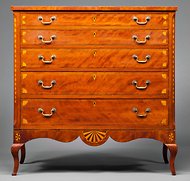 Mr. Kanter also bought posters for lesser-known acts, with headlines like “Mildred the World’s Greatest Mind Reader” and “Kar-Mi Swallows a Loaded Gun Barrel and Shoots a Cracker From a Man’s Head.”

Ten of the auction lots promote Howard Thurston, a popular magician who traveled with train cars full of equipment. The Kanter posters show Thurston conducting an orchestra of skeleton and demon musicians and levitating an assistant into a theater’s rafters.

Rory Feldman, a magician and historian who is planning to set up a nonprofit Museum of Magic in New York, owns a vaster collection of Thurston material. But he praised the Kanter works.

“They depict some of Thurston’s greatest illusions and moments from his career,” Mr. Feldman wrote in an e-mail.

Few traces remain of Little Syria, a Lower Manhattan neighborhood, except the community’s 1920s former church, the St. George Chapel of the Melkite Rite, at 103 Washington Street. On its creamy terra-cotta facade, now engulfed in scaffolding while a hotel is under construction next door, a colorful relief shows St. George spearing a dragon.

Little Syria largely vanished in the 1960s, as the Brooklyn-Battery Tunnel and the World Trade Center swept aside its coffeehouses, recording studios, lace and pistachio importers and charities helping refugees. (It exists in virtual form at a Web site set up by preservationists, Save Washington Street.) Neighborhood artifacts have been reassembled for “Little Syria, NY: An Immigrant Community’s Life & Legacy,” a show that opens on Friday at the Arab American National Museum in Dearborn, Mich.

In May the exhibition will travel to the 3-Legged Dog art center at 80 Greenwich Street in Lower Manhattan, near the Syrians’ former church. The displays could be expanded for New York if more material comes to light.

“We’re being flexible,” said Matthew Stiffler, one of the curators.