From 1933 to 1945, the Nazis orchestrated the most massive art theft in history. Many of the works looted from Jewish art collectors are in major museums today, demanding unsettling questions to be answered. Less is known that, during this same period, many European Jews, including several fleeing Hitler and Fascist Europe, played a critical role in developing Indian art in the early 20th century. Jews and The Indian National Art Project reveals the role that Jews played in the development of the Indian National Art Project, which sought to connect India to its past and drew upon its rich Indian traditions and art heritage.

Kenneth X Robbins and Marvin Tokayer make an important point — that the endeavour to innovate and create an “Indian” contemporary art was never a “hermetically sealed quest for purity”. Although the movement engaged Indian artists, scholars, critics and patrons, this endeavour was always outward-looking. Key players in this movement were: Maharaji Sayaji Rao III Gaekwad of Baroda, the Tagores and the Bengal School of Art, and the J J School of Art and the Progressive Artists’ Group of Bombay, as it was then called. 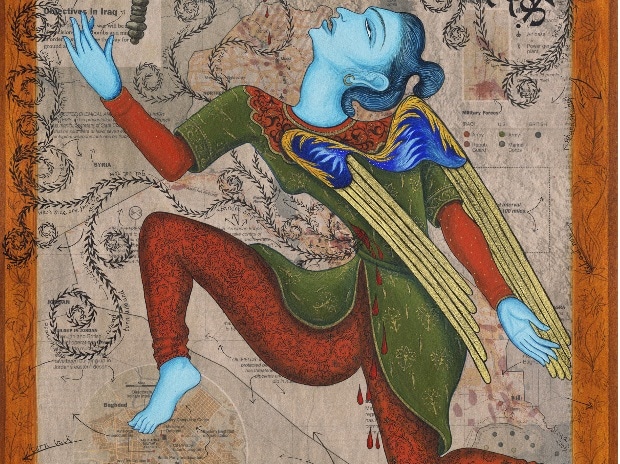 This unique book, with its visual treat of luminous works of art and images, captures the pivotal roles many European Jews played in this cultural flowering.

Atiya BegumThe essays document the contributions of Jewish refugees like Rudi Von Leyden, Emmanuel Schlesinger and Kathe Langhammer, who were mentors to K H Ara, M F Husian and S H Raza, all members of the Progressive Art Group. Langhammer wrote the first monograph on Raza’s work and encouraged him to compare works by European masters with Indian miniature paintings. The establishment of the Jehangir Art Gallery was the last major contribution of the group of Jewish refugees to the art movement in Bombay.

The book highlights the personal contributions of Western Jews in India, and provides insights into the passions and the intellectual questions they debated along with their Indian counterparts. Among the Jewish stars in this firmament was Stella Kramrisch, an American Jewish art historian deeply connected to the Bengal School. She was largely responsible for reconfiguring Indian art and artists in Europe. Her pioneering exhibition in Calcutta in 1922 had Indian artists displayed among 175 works of European artists, including Paul Klee and Wassily Kandinsky.

Gladstone Solomon, principal of J J School of Arts (1918-1936), was also influential in defining Indian art. Marionn Harry Spielman, a curator for Maharaja of Baroda’s pioneering and comprehensive art collections, bought over 190 European paintings for Sayaji Rao. Sir William Rothenstein, Kramrisch and Solomon helped to shape debates about the appropriate training of artists and aesthetic values, evaluation of Indian paintings, and the purpose of Indian art education and nationalist art theory. Although Robbins does acknowledge the critics who questioned Europeans having a defining role in the Indian National Art Project, he does not delve deeper into the topic to make a compelling counter-narrative.

The book also features the work of S Rahamin Samuel Talkar, a Bene Israeli Jew who was part of this art movement (Bene Israel is a historic community of Jews in India). He converted to Islam and changed his name to Fyzee Rahamin. Partha Mitter’s essay features Rahamin’s artistic contributions and philosophy, along with stunning images of his works. Rahamin’s paintings were informed by Indian traditional arts and spirituality; he was one of Maharaja Sayaji Rao Gaekwad III’s favourite painters and art advisor. Between 1908 and 1918, he produced over seven portraits of the princely family, now in the Baroda and Fatehsingh museums. He married classical singer and intellectual Atiya Begum in 1912. In 1947 they left for Pakistan and spent their old age in considerable hardship there.

The last seven essays in the book move beyond the Indian National Art Project to feature European and Indian Jews engaged with the arts in India: artists, photographers, dancers, architects and art patrons till present day, making the book title something of a misnomer. These include the Bagdadi Jewish Calcutta photographer David Mordechai, who played an important role in the development of Indian photography, documenting the last days of the British Raj and early post-Independence era. With over 100 studio employees, Mordechai’s travels and observational photography “documented the concept of an India that could be known, classified, represented and controlled”.

Painting titled “Brother and Sister” by Magda Nachman Magda Nachman, a Russian painter in exile in Bombay, considered herself an Indian artist and gave lessons to the young Ara. Indira Chowdhury shows that Nachman rebuilt her portfolio to focus exclusively on Indian subjects and regularly contributed to the Bombay Art Society, winning an important prize for her painting, Red Shawl in 1940. Hilde Holger, a great expressionist dancer, had a quintessentially cosmopolitan studio while she lived in Bombay. They were both very much part of the vibrant art scene of Bombay.

Carmel Berkson, an American Jewish artist scholar, was awarded the Padma Shri (2010). Her books and photographs dealing with Hindu sculpture are considered classics. Anish Kapur, also a Padma Shri awardee (2012), whose mother was a Bagdadi Jew, was raised in India and spent his teenage years in Israel. The art of Rebecca Yehezekiel and Siona Benjamin, Bene Israeli artists, draws inspiration from their Indian heritage while living transnational lives. Benjamin’s art incorporates elements of Mughal, Rajput and contemporary schools of miniature painting and the volume has many wonderful images of her incandescent art works.

The last chapters of the book inexplicably look beyond the Indian National Art Project, referencing Jewish artists such as Martha Isaacs, Mirra Alfassa (the Mother) and Anna Molka Ahmed; architects such as Joshua Benjamin, Louis Kahn and Moshe Safdie; and patrons of the art such as Jean Baptiste Ventura who have been treated more fully in Robbins and Tokayer’s Western Jews in India.

The Rothensteins and TagoresAlthough the concluding chapter attempts a summary, the book as a whole lacks a strong analytical framework. The main point it makes is that “…Jewish foreigners … were not controlled by doctrinaire, mystical, exotic, hostile or nationalist limitations to their approaches…They did not insist on an unchanging, consistent, uniform vision of ‘India’ as part of the ‘Orient,’ which was only ‘an idea that has a history and a tradition of thought, imagery, and vocabulary that has given it reality in and for the West’.” It successfully demonstrates that outside impulses and influences enriched Indian art and artists who transform those influences to create new art forms.

It is intriguing to note that aside from Yehezekiel and Benjamin, who drew inspiration from their Jewish cultural roots, none of the others represented drew on their Jewish heritage, and many did not even acknowledge their Jewish identity. The book raises but does not seek to answer interesting questions regarding why Western Jews were drawn to the effort to connect India to its pre-colonial traditions.

The reviewer is a Nehru Fulbright scholar