Book Review: Jewish Dharma – A Guide to the Practice of Judaism and Zen by Brenda Shoshanna, Ph.D 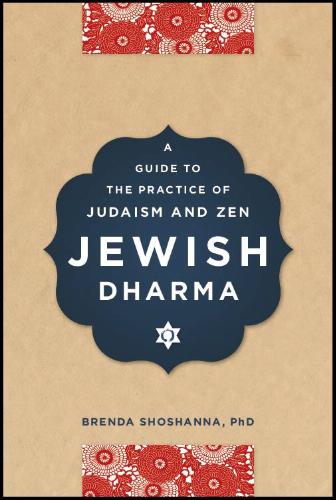 About 20 years ago one of my Pilates clients who was a practicing Buddhist introduced me to Rodger Kamenetz’s The Jew In the Lotus, which chronicles a voyage where Jewish representatives from the United States went to Nepal to speak with the Dalai Lama about how to hold a religion together through massive dispersion. This was the first time I had heard of “JuBus” (Jewish Buddhists) as well as the first time I started to think about my personal Judaism as something more interesting than the boring conservative practice of my youth.

While many Jews who have this kind of epiphany go on to study more Buddhism, I was much more comfortable going the other way and learning more about Jewish mysticism, Jewish meditation, and the spiritual practice of Judaism. I found a wonderful rabbi, a wonderful synagogue, and just kept on reading every book that came out on the topic (and the in the ’90s there were a lot!).

So when I entered into Brenda Shoshanna’s latest book Jewish Dharma I was already quite familiar and conversant on and with the intersection of Judaism and Buddhism. What drew me to Dr. Shoshanna’s work, however, was that she was raised as an Orthodox Lubavitch Chasidic Jew in Brooklyn, New York. And I wanted to hear about these practices from an observant orthodox Jew, not only from less observant “new age” JuBus (even though her initial reviews are all famous JuBu names, including Kamanetz, Rabbi Marcia Praeger, Lama Surya Das, Lewis Harrison, and Rabbi Shefa Gold).

And Jewish Dharma delivers! In each chapter Dr. Shoshanna takes up a different aspect of spiritual practice, tells some stories about her challenges with the practices be they Jewish or Buddhist, shows how the two religions are similar in their teachings, and then offers a short lesson to practice. For example, in “Calming the Restless Mind: Sabbath and Nondoing,” she makes clear how the Jewish practice of preparing each week for the gift of the complete non-work and spiritual focus we enjoy on the Sabbath no matter where we are or what we are doing, is similar to the Zen practice of finding your home when you sit Zazen no matter where you are or what else you are doing – and then gives guidelines for both.

Jewish Dharma: A Guide to the Practice of Judaism and Zen will appeal to Jews, Buddhists, JuBus, and those who are interested in learning more about both. If you already practice either or both, Jewish Dharma will help you deepen your understanding and offer some new ideas for your practice. It’s useful, engaging, and I for one will refer back to this book for years to come.