Book Review: Promise in another land 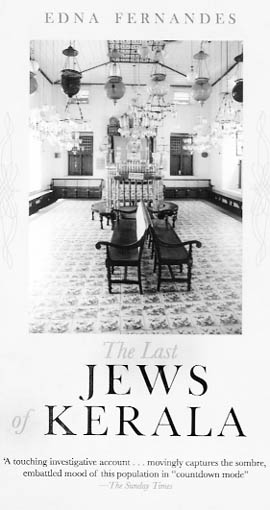 ON a visit to the Jew Town at Mattanchery in Kerala, I accosted an old Jewish woman selling souvenirs and booklets to know a little more about her community, but she simply refused to talk. Twenty years ago, the Jews of Kerala had already become a Museum community with tourists harassing them with awkward questions and some even invading their privacy in their homes by peering through their windows.

Edna Fernandes, a journalist, also faced the same Jewish disinterestedness in talking to strangers but she persisted and the result is this wonderful book that reads more like a travelogue, than a book of history.

Of course, she has not skipped on the origins of the Jews of Kerala, which lie in Biblical times. “The available history is a patchwork of folklore, fable and historical fact.

“,i>The Old Testament indicates that the first Jews landed on Indian shores thousands of years ago, sailing from Israel on trade missions from the court of King Solomon. Biblical accounts depict sailors and merchants docking at Kerala’s main harbour, charged with procuring spices and exotic treasure such as ‘elephant’s tooth, peacocks and apes’.

“A further wave of immigrants arrived after the Roman capture of Jerusalem and destruction of the Second Temple in 70 CE, a ruthless act of conquest which sent the Jews into exile, scattering Israel?s tribes across the globe like seeds of hope”.

In later centuries also, waves of Jews arrived in Kerala as either immigrants or traders. They were caught in local warfares as when the Zamorin of Kozhikode detested the Portuguese, who, misusing his hospitality, began to lord it over the seas harassing and killing Arabs, who had been trading with his subjects for millennia.

It took a while for the Jews to be heard by the benevolent rulers of Kochi, who not only gave them safe havens at Mattanchery and Chennamangalam in Ernakulam where at one time they numbered several thousands with at least eight synagogues catering to their spiritual needs.

In the caste-based social order that existed in Kerala then, the Jews faced little problem in integrating themselves in the Malayali society while retaining their distinct identity. They were in any case too few to pose any threat to the dominant Hindus, Muslims and Christians.

In fact, the Jews of Chennamangalam took pride in the fact that theirs was the only village in the world where one could hear the shofar of the synagogue, the peel of the church bell, the trumpet of the Hindu conch shell and the cry of the muezzin. The famed tolerance of the Malayali helped them preserve their ways of life, keeping the Sabbath and eating kosher meat.

A small minority, concentrated in a small area, enjoying all creature comforts should have been thriving and not dying. “No, we are not dying. We are already dead”. Why are the Kerala Jews so small in number that they can be counted on one’s fingers? It is appropriate that the author begins with a description of the last journey of Shalom Cohen, last of the priestly line of kohanim in Kochi.

Once the old Jews die and the only Jewish woman of reproductive age in Mattanchery, who refuses to marry, reaches menopause, it will mark the end of the white Jewish community in Kerala. Seen against this backdrop, the inscription on the synagogue clock tower – “Our days are like Passing Shadows” (Psalms 144: 4) – appears so prophetic and so real.

The creation of Israel in 1948 and the open invitation to the Jews the world over to return to the “Promised Land” saw what the author calls the ‘Cochini Jews’ migrating to the new nation in large numbers. The young and the healthy migrated to the new nation, leaving the old and the infirm in idyllic Kerala.

It is well known that unhealthy interbreeding is what brought the Jews to their present sad demographical state but what is not so known is the internecine war they fought over the centuries, not on doughty theological issues but on petty colours of the skin.

The black Jews were looked down upon by the whites who believed that they belonged to the menial class – workers, cooks and machine operators – when they began their journey from Jerusalem in search of a safe sanctuary. The whites kept the blacks at a distance, though they read the same Thorah, ate the same meat and kept the Sabbath.

They overlooked the lines in Leviticus that said, “you must not slander your own people ’85 you must count him as one of your countrymen and love him, for you yourselves were once strangers in Egypt”.Forget white-black marriages, the black Jews were not even allowed inside the synagogue until a Gandhian among them, A.B. Salem, saw to it that the divide in the synagogue was ended for ever. The realisation about the futility of the war within occurred to them only when the white Jews were forced to buy kosher meat from a black Jew, who alone knew how to slaughter chicken according to the Jewish custom.

The author provides pen-portraits of two Cochini Jews, who went to Israel as young men, to make a new beginning in life. One of them, Eliahu Bezalel, has earned national and international recognition for proving that flowers can be grown in the arid deserts of Israel and exported profitably.

Another is Abraham, who despite living in the war-torn Israel for 60 long years still yearns to return to the peace of Kerala, a peace that history has rarely bestowed on the Jews. Edna Fernandes’ is a moving account of a community on the countdown mode for which births and marriages are history while deaths and funerals are a living reality.