Book Review: Scattered Among the Peoples 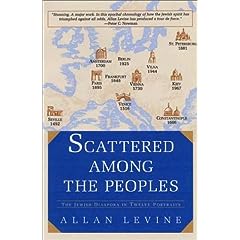 For each of these, he identifies important Jewish individuals who left their imprint on Jewish history. By telling their stories, Levine provides a unique approach to understanding what happened to Diaspora Jewry during these past 500 years. He begins by tracing the movement of the Abravenel family from Spain to Portugal to Italy to Turkey, bringing to life what happened to Spanish Jews as they survived persecution, expulsion and ghettoization.

The development of the Dutch Jewish community during the 18th century is told through examining the lives of Abraham Pereira and his family. A wealthy merchant, Pereira helped to organize the Jews of Amsterdam and to build the famous Portuguese synagogue, which stands to this day. Court Jews, such as Samuel Oppenheimer and Samson Wertheimer, figured significantly in the development of Hapsburg rule over Austria and surrounding territories. While they tried to improve the lot of their fellow Jews, they encountered considerable opposition and envy from both Christians and Jews.

Following chapters on the rise of the Rothschilds and the Jews of the shtetl in the Pale of Settlement, the saga of Alfred Dreyfus and of French Jewry is presented. Even though well over 100 years have passed since the anti-Semitic horrors of the Dreyfus case frightened Jews everywhere, Levine’s effective re-creation of the story still has the power to send a chill down the spine. The last four times and places that are dealt with include American Jewry in the early part of the 20th century; pre-Nazi Germany in the 1920s; Vilna in World War II; and Soviet Jewry before the end of Communist rule.

Finally, the contemporary Diaspora is considered and the book concludes with the assertion that Jews are forever burdened with the task of “coming to terms with the Jewish condition”? in every time and place. Levine has given us an exceedingly well-written survey of Jewish history since the expulsion from Spain in 1492. Some might quarrel with his starting point by arguing that the Diaspora on which he concentrates really began in 586 B.C.E. and 70 A.D. when the temples were destroyed. However, this would be quibbling in view of the author’s remarkable ability to combine lively popular history with outstanding scholarship.