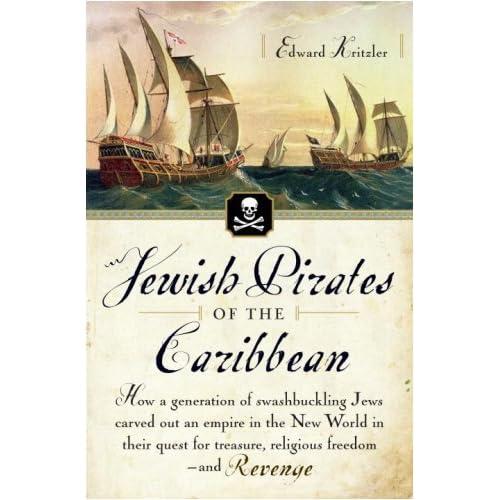 Kritzler, Edward. Jewish Pirates of the Caribbean: How a Generation of Swashbuckling Jews Carved Out an Empire in the New World in Their Quest for Treasure, Religious Freedom – and Revenge. New York: Doubleday. 2008

Yo ho ho and a bottle of Manischewitz! The jokes had better be disposed of immediately, since the very notion of a Jewish pirate seems to raise a smirk among a large readership, much as the notion of a great Jewish baseball player must have for generations before the advent of Hank Greenberg and Sandy Koufax. The juxtaposition of Errol Flynn-like derring-do and dashing physicality associated with pirates as related to Judaism strike some as ludicrous – not least Mel Brooks, who has never been slow to exploit innate absurdities. Brooks, in his early years, used to present a variety of characters as party entertainment, and when not incarnating the 2,000 YearOld Man, another of his guises was as the Jewish Pirate. Witnesses say the character consisted of a little fellow who kvetched about the price of sailcloth and about how difficult it was to assemble a good crew “these days,” among other concerns both piratical and Hebraical.

The same joke continued in last year’s “The Government Manual for New Pirates” by Matthew David Brozik and Jacob Sager Weinstein (Andrews McMeel Publishing). “The Government Manual” offers tongue-in-cheek observations dressed up as a how-to guide, such as “Jewish pirates have always faced special challenges; salted pork, for example, is one of the most common foods at sea, and salted matzoh balls simply do not travel as well.” Brozik and Weinstein also offer a brief “Pirate-Yiddish” glossary in which the term “scurvy dog” is translated as fershlugginer momzer and “gentleman o’ fortune” as gonif. Small wonder that Edward Kritzler’s forthcoming book drew a flurry of excited reactions when its title was announced: “Jewish Pirates of the Caribbean: How a Generation of Swashbuckling Jews Carved Out an Empire in the New World in Their Quest for Treasure, Religious Freedom – and Revenge.” Bloggers leaped in, with such captions as “Aaaargh, Jewish pirates.”

Yet there are serious subjects behind all the Jewish – and pirate – jokes. The era of the Jewish pirates is traced to the medieval expulsions of Jews from European countries, culminating in the Spanish expulsion of 1492, which impelled a few suffering exiles to seek income and refuge in that most uncertain and desperate domain, sea piracy. Among the major names dealt with in Kritzler’s book is Samuel Pallache (1591-1626), a Sephardic Jew from a distinguished Moroccan rabbinic family who used his status as ambassador to The Hague to set up business deals with privateers in the Barbary States (the middle and western coastal regions of North Africa). Another, Abraham Cohen Henriques, was an arms dealer who sponsored the printing of Hebrew books in Amsterdam circa 1627. These men, often highly religious, were deeply involved with the society and economics of their time, not just banditry.

Then there is Jean Lafitte (1776-1826), a privateer in the Gulf of Mexico who possessed a personal fiefdom in the Louisiana bayou. Lafitte and his brother Pierre ran a warehouse in New Orleans to market the goods Jean’s ships captured. Following the 1815 Battle of New Orleans, in which he and his men fought alongside Andrew Jackson’s American troops, Lafitte moved his base of operations to Texas’s Galveston Island. Jean Lafitte’s published diary, the authenticity of which is still hotly debated, states that he and his brothers were raised on the Caribbean island of Hispaniola by a Jewish grandmother, Zora Nadrimal, who often told the young boys how their family suffered under the Spanish Inquisition, sparking their determination for revenge. The same source states that Lafitte’s wife was a Danish Jew, Cristiana Levine.

These highly complex, multifaceted personalities have been discussed in some specialized historical literature, but “Jewish Pirates of the Caribbean” is a giddy, breathless dash through the material, clearly intended for an impatient and easily bored general reader. Kritzler, a transplanted Manhattanite, gives lively lectures to tour groups in Jamaica, where he is based. In an article posted on the Web site of Kingston’s United Congregation of Israelites, Kritzler admits: “My editor was firm: ‘Pirates of the Caribbean’ movies made a billion ‘so we’ll call your book “Jewish Pirates of the Caribbean.”‘ I agreed: ‘Yes, a great title, but truth be told, most of my Jewish pirates were nowhere near the Caribbean.'” Kritzler’s editor, thanked in his book’s acknowledgments, is Adam Bellow, son of the Nobel laureate novelist Saul Bellow. The younger Bellow, who has since left Doubleday for Collins (an imprint of HarperCollins), is noted in his own right as the editor of such best-selling right-wing screeds as David Brock’s “The Real Anita Hill” and Dinesh D’Souza’s “Illiberal Education.” The real-life Jewish pirates deserve more thoughtful analysis than is found in these already outdated polemics, or, indeed, in the increasingly unwatchable “Pirates of the Caribbean” film series.

In chapters titled “Samuel Palache, the Pirate Rabbi,” “Zion Warriors in the New World” and “Buccaneer Island,” Kritzler runs through a gamut of eras and protagonists, giving the book a rather slapdash feel. This is due partly to the writing style, which splashes around such neologisms as”ethnic cleansing,” “inside traders” and “realpolitik.” Content is also a problem. A substantial “epilogue” offers a theory about the location of Christopher Columbus’ gold mine, a notion discounted by local historians but soberly advanced by Kritzler, perhaps because pop histories these days must offer such claptrap to be commercially viable, like Gavin Menzies’ notoriously unreliable “1421: The Year China Discovered the World.” Kritzler takes contemporary documents at face value, even undependable Inquisition trial transcripts, minus any sense of sustained critical inquiry.

Perhaps most vitally, “Jewish Pirates of the Caribbean” does not venture to explain the ongoing fascination with the subject of Jewish pirates, outlaws who transmuted self-defense into aggression. Piracy for some past Jewish authors was a trope for fighting to defeat time and death. Frenchman Marcel Schwob (1867-1905), an invalid who died young, was inspired by Robert Louis Stevenson’s “Treasure Island” (1883) to write “Imaginary Lives” (“Les Vies Imaginaires“) (1896), a collection of short fictionalized biographies that includes the swashbuckling “Captain Kidd, Pirate; Walter Kennedy, Unlettered Pirate, and Major Stede-Bonnet, Pirate by Fancy.”

As antisemitism swept 1930s Europe, novelist Howard Fast (1914-2003), an American Jew, published a fictionalized story of the life of John Ordronaux (1778-1841), a Jewish privateer of the War of 1812 who captured several British ships. Closer to our own time, in an essay titled “Philosophical Perspectives on Just War,” printed in “War and Peace in the Jewish Tradition” (KTAV Publishing House, 2007), Herb Leventer implies that piracy, Jewish or not, has considerable resonance today. Leventer, a member of the ethics faculty at Mount Sinai School of Medicine, notes that the “terrorist has much in common with the pirate – he is a non-governmental agent, perpetrating violence against civilians, outside his own country (where his own local police would be responsible for stopping him), seemingly no one state’s problem, but clearly everyone’s problem.”

Could the thrills pirates offer to some readers – and filmgoers – be a method of turning the tables on today’s international terrorists by exulting over safely remote historic deeds, committed for arguably justified motives? To blot out present-day terrorist obscenities, is it somehow comforting to enjoy tales of old-time terrorists who fought on the right side? Back in the days when Jews were hunted down from country to country as permanently stateless exiles, they were treated like pirates, who likewise did not benefit from the protection of any nation. A pirate was, as the ancient Roman saying went, hostis humani generis, an enemy of all mankind. The outcast status of Jews is not so distant that an emotional recollection, however deeply buried, of outlaw status makes Jewish pirates more vividly present in our imaginations than we might have suspected.

“Jewish Pirates of the Caribbean,” though superficial, does remind us of this preoccupation, and this status. Its most useful element may be the fleeting note at the end of the acknowledgements, which directs readers to such distinguished historians of Judaism as Cecil Roth, Lucien Wolf and Jacob Andrade. It is to be hoped that at least a few readers of “Jewish Pirates of the Caribbean” will find the time and patience to follow these bibliographical hints.

Benjamin Ivry is the author of biographies of Rimbaud, Ravel and Poulenc and has translated into English the works of such authors as Gide, Verne and Balthus.