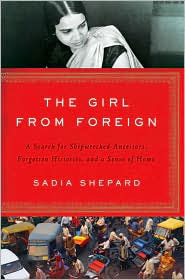 Could you juggle three religions? Sadia Shepard’s first book, The Girl from Foreign: A Search for Shipwrecked Ancestors, Forgotten Histories, and a Sense of Home, is a memoir about a woman who does just that. Shepard gives a face to interfaith families. She is a survivor of disparate religious traditions and not too foreign cultures.

“It can be a confusing way to grow up,” Shepard tells me over coffee. She looks snug in a knit purple sweater as she reaches for a sip. “But also a rich way to grow up.”

Shepard writes about growing up interfaith like a puzzling but comfortable math problem: “Three parents. Three religions. It sounds fantastic and unusual to me now. As a child, it was merely our topic sentence. Whereas other children we know had two parents, perhaps two pairs, Cassim and I had three: a grandmother, a mother and a father. An idea to explain our private world grew like an insatiable, invisible beanstalk in the spiral staircase of our house.” The Girl From Foreign is that explanation. It is an exploration of the private world of one interfaith, intercultural family.

When we meet Shepard as a child, she is being raised by a white Christian father, a Pakistani Muslim mother and her Indian maternal grandmother she has always known as Muslim. “We celebrated everything,” Shepard says. “It was important to my parents that we felt comfortable in all their traditions.”

But when Shepard turns 13, she uncovers another piece of the puzzle. Among her grandmother’s things she discovers a paper that reads “Rachel Jacobs.” Her grandmother drops a bombshell then, revealing that she had been part of a Jewish community in India long before running away to marry Shepard’s Muslim grandfather.

The story hinges on a promise to this grandmother. In one of her last conversations with her usually modest grandmother, Shepard remembers her saying “promise me that you’ll go to India and learn about my ancestors. Promise me you’ll tell my story.” It is this beloved grandmother’s dying wish that propels Shepard into a discovery of her Jewish roots.

Shepard’s next steps spark an ongoing conversation between the living and the dead. With a Fulbright scholarship in hand, Shepard goes off to India to make a documentary about her grandmother’s people. They are the Bene Israel, a group of Jews who believe they were shipwrecked in India. In the Bene Israel, we see Indian and Jewish cultures dovetail with incredible ease. Indeed “they look Indian,” but the men are as comfortable in kippot and prayer shawls as the women are in their “good silk saris.”

The Bene Israel community itself seems at once full of life and dying. Though the community has escaped the anti-Semitism that has ravaged so many other Jewish communities, they are slowly decimated by their longing for the land of Israel. And while the community makes its choices to stay in India or move on, they ask Shepard to also make a choice. Is she Jewish? Is she Muslim? To them, Shepard can no longer live as an “in-between.”

But it is “in-between” these questions that the true story unfolds. Shepard’s search for her grandmother’s roots does not yield answers as much as it invites more questions. “When you grow up in a family of more than one religion, are you required to choose one religion?” Shepard wonders. “I hope that people faced with similar questions might enjoy coming along on the journey that I’ve gone through to try to answer that question for myself.”

Shepard’s physical journey is one of rich backdrops and exotic Indian locales, all of which Shepard paints beautifully. A particularly vivid scene of traveling by train in a world where cars are segregated by sex becomes a haunting look at what it means to be a stranger in a strange land. We ache for the mistakes Shepard makes as an American abroad.

Still more exquisite is Shepard’s other journey. It is one luxuriously mapped out inner voyage that asks her to question her identity and her place in the world. Her identity is itself another math problem. Before she discovers her Indian Jewish roots, she considers herself: “Half Pakistani, half American. Half Muslim, half Christian. Half-half.” But just where does this “half-half,” as she calls it, belong?

According to Shepard, it would seem that a “half-half” belongs everywhere and nowhere. “It is increasingly comfortable to have a foot in multiple worlds. It’s even encouraged,” Shepard says. “It’s something that people are increasingly seeing as a passport, not a hindrance.” But in her book, we see how it wears. She writes: “There’s an element of subterfuge in the way I live, chameleonlike, presenting different sides of my religious background to different people. But it also allows me to keep asking questions, to hear what is really said behind closed doors. I’m not sure that I’m willing to give it up, not yet.”

But just what does a woman at home in all three dominant religious traditions believe? Don’t expect a primer on how to balance the varied religious practices of these traditions. This is a story, Shepard admits, of many questions. And the book does raise more questions than it answers. It is also not a spiritual quest. Instead, it focuses more on unlocking the mysteries of family history and how the decisions of the past affect the present.

Deftly interwoven into the story of the nearly two years Shepard spends in India and Pakistan is a peek into the life of one warm, loving interfaith family. We see a photo of Shepard’s parents on their wedding day, her father in his pinstriped suit juxtaposed against her mother in her white sari. Then there are the languages: Arabic, Hebrew, Urdu, Hindi, to name a few, and the mouthwatering meat dishes that require a coconut milk substitute. Despite these colorful intercultural exchanges, the stories seem uniquely American. For where else could such stories take place? (Well, apparently, India for one.) Shepard’s mother comes to America as a foreign exchange student and falls into an unlikely romance. It is her birthright, an inherited journey that mirrors her mother’s own.

“I was the product of two unlikely love stories. Of my mother and my father. Of my grandfather and my grandmother. Both of the strongest women in my life left their homes, their circles of comfort, for a great love that took them far from their original realities,” Shepard says. And Shepard’s book is not without its own romance. There is a slow burning connection with a Hindu-Muslim documentary filmmaker, the dreamy Rekhev. It is a romance that seems to portend that Shepard could take that family legacy into a third generation. It is also a romance that despite its brevity and social graces leaves the reader turning pages while salivating for more.

The Girl From Foreign will leave its readers with many thoughtful questions about the inner landscapes of interfaith families and the impact of the decisions they make to form a cohesive whole. Though our choices may not be similar, Shepard’s decisions ask us to think deeply about our own. How do we negotiate our religious commitments? How do we, in the land of so many immigrants, uphold the traditions of our beloved ancestors? Shepard’s book urges us to find the answers to these and many more questions in our own hearts.

“Dominant thinking about growing up in a home with more than one faith is that it is simpler and clearer for the children involved to choose one faith and one culture. And while I absolutely respect that notion, I come from a home that decidedly did not do that. My parents, my father, my mother and my grandmother, chose to encourage an interest in their children in three faiths and passed on a tremendous curiosity and eagerness to understand [them], which we continue to bring not just to the study of faith but to the world and whatever we’re involved in,” Shepard says, “I think that’s one of the greatest gifts they could have given us.”

Telling Shepard I was reviewing her book for Interfaithfamily.com made her curious. With a certain reverence, she tells me that she made her way to the website. “These are my people,” she says with emotion. And I wonder as she tells me this, if perhaps her search for community and identity didn’t require a passport but merely an Internet connection. Luckily, Shepard’s readers will be the beneficiaries of a search that took her much further.