When eight-year-old Klara, standing beside her father on the German MS S. Louis ocean-liner, sees Miami with her bare eyes, her father sighs and says, “So near, and yet so far.”

So became the title of the new So Near, and Yet So Far: Klara’s Voyage on the MS S. Louis, a children’s book that tells the story of the 900 Jewish German refugees stuck at sea at the onset of World War II when, in quick succession, Cuba, the United States and Canada refuse them entry.

Caytak, who grew up in S. Paul, Minn., lives with the history of her grandfather, the only member of his family from Poland to survive the Holocaust.

“I always felt pain and sorrow” for the fact that he lost his family, she said. “Let me turn my pain and sorry into something positive for the community in Ottawa and the world, to transform the tragic events into a catalyst for providing a positive message and lesson.”

Her three-part project includes the 45-page children’s book authored by Sara Loewenthal, co-director of Chabad of South Kensington in Central London; a mural by Chasidic artist Michoel Muchnik; and a parent and teacher guide about the infamous ship.

Loewenthal spent months researching the fate of the MS S. Louis, and created the persona of a German Jewish girl who travels aboard the vessel with her parents and sister in a quest for asylum in Cuba. The U.S. Embassy even took interest in the project as an educational opportunity, and sponsored Loewenthal, illustrator Nicholas Jackson, and real-life S. Louis passenger Herbert Karliner to travel to Ottawa and speak at local schools.

While in town, the guests participated in various events sponsored by the U.S. Embassy, including a DVC digital video broadcast to U.S. diplomatic posts and a private tea held at the home of the U.S. Ambassador David Jacobson. Visiting both Jewish and public schools, the delegation addressed students at Rambam Day School, the Ottawa Jewish Community School, Knoxdale Public School, the Ottawa Modern Jewish School and the Ottawa School of Art.

While not actually for sale, the book will be distributed free to public schools and libraries across Canada, along with an educational guide encouraging group discussion on such issues as racism, bullying and tolerance.

At the events, Loewenthal read from the book, while her husband, Rabbi Mendy Loewenthal, played a violin in the background and Jackson’s authentic images appeared on a large screen.

Jackson, who lives in Bemidji, Minn., said it was “an honor to be chosen” to illustrate the book, his first break into the industry. Jackson spent months researching archived photos and redid many sketches to ensure cultural accuracy, such as the ship’s architecture and passengers’ attire.

“Any time you can retell history, especially such an important part of history, it’s a great thing,” he explained. “The challenge was the historical accuracy of the piece and relaying it to children so we pass the story on correctly and don’t repeat history.” 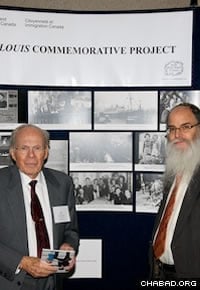 As a fictional eyewitness to the historical events if 1939, Klara brings young readers to the decks of a ship whose passengers occupied an uncertain space between freedom and the horrors of the unfolding Holocaust.

“We are at the Hamburg port,” the girl narrates. “Mama is crying. Papa wasn’t able to buy tickets for Oma and her brother Hans. Papa tried, but he said we were lucky to have gotten the four tickets just for us. There were only 937 tickets to sell.”

The non-Jewish, but anti-Nazi, German captain of the ship, Gustav Schroeder, was kind to his Jewish passengers and desperately attempted to save them after Cuban President Frederico Bru denied the majority refuge. The American Jewish Joint Distribution Committee spent a week in Cuba negotiating with the president, but to no avail. Waiting for a week outside Cuba, Schroeder sent telegrams to Hollywood stars and U.S. President Franklin D. Roosevelt, but never heard back. Instead, Roosevelt sent a police boat to guard the American coast.

Schroeder next tried Canadian Prime Minister William Lyon Mackenzie King, who similarly rejected his entreaties. An immigration officer declared that “none is too many,” a cold indifference to Jewish suffering which the current Canadian government continues to rectify.

“I look around the ship and see boys and girls my age, Mamas and Papas, Omas and Opas,” Klara continues. “There are even tiny babies! I hope Canada realizes that a whole world is aboard the MS S. Louis.”

The ship’s fate became a propaganda machine for the Nazis, who interpreted its voyage as indicative of a worldwide unconcern for the plight of the Jews. According to estimates, 227 of the refugees that had set sail were ultimately murdered by the Nazis.

Eventually, Belgium, France, Britain, and Holland, which were not yet overtaken by Nazis, allowed the passengers entry. In the book, Klara’s family heads to France, where most of the ship’s passengers ended up in labor camps and from there on to Auschwitz.

After the war, Klara and her sister reunite at a Displaced Persons Camp and move to Montreal.

The story pulled the heartstrings of students, who identified with the emotions of the similarly-aged Klara.

“When I read it in a public school, a Japanese boy asked, ‘Why didn’t Tokyo take them in?’ ” says Loewenthal. “In a Chabad Jewish day school, a six year old boy said, ‘If [Canadian Prime Minister] Stephen Harper would have been the prime minister then, he would have let the Jews come into Canada.’ In every school I read it to, I was asked: What happened to the Mama and Papa?”

At the book launch in Ottawa, Jackson looking at photos of the ship on display and Karliner pointed out pictures of himself as a 12-year-old boy. Like the fictional Klara, Karliner set sail with his parents, siblings and relatives and ended up in France. 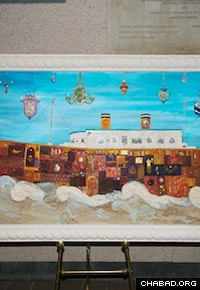 Encountering many close calls and miraculous escapes, Karliner went from a children’s home for refugees to working for a French bakery until he was arrested in 1942. A week shy of his 16th birthday, Karliner was released from a camp that only accepted boys over 16. Given false papers by a Russian Jewish organization helping Jewish youth, Karliner changed his language to match his fake Loraine identity and worked on a farm disguising himself as Catholic. Only he and his brother survived the war and he eventually settled in Miami, leaving to work as a baker in the New York Catskills during the early 1950s before being drafted into the U.S. Army.

Karliner, who organized the first reunion for S. Louis survivors in his adopted home of Miami, said that “it’s important that people know [what happened]. It shouldn’t happen again.”

“It’s a beautiful book,” he added about the project. “Young people will understand it. [It presents] the way my family felt to leave Germany.”

Now gracing the walls of the Jewish Youth Library is the project’s mural, which Muchnik titled “Turbulent Seas.” The mosaic offers a redemptive vision of the tragedy, with lamps representing the eternal souls of doomed passengers and artistic renditions of various professions and good deeds reflecting the immense experiences of the people on board.

“We didn’t want something hanging that was sad and depressing, focusing on the tragedy,” explained Muchnik. “The best way to perpetuate [the story] is to show the renaissance of Jewish life.”

The focal point of the artwork is a large ship at sea, he continued. “A ship and the sea offer a Chasidic model: A soul needs a good map, the Torah, a Rebbe and good spiritual leaders to find its way.”
(Tags: Holocaust, Jews)