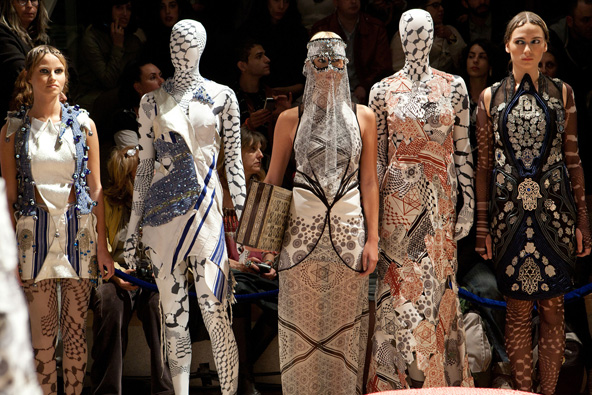 On Sunday night, the fashion collective Three as Four opened its highly anticipated exhibition “Insalaam Inshalom” at the Beit Ha’Ir Center for Urban Culture in Tel Aviv, bringing to fruition a project over two years in the making. Covering the walls of the four-story building in fabric printed with their spring collection’s central motifs, which are made of a mix of Muslim and Jewish symbols, the designers Gabi Asfour, Adi Gil and Ange Donhauser invited 10 artists to show works that relate to the project’s central notion: that Judaism and Islam can live side by side. “We’ve accumulated the energy of artists and performers who are like-minded,” Asfour said. “We tried to balance things from all sides, though it’s always difficult.”

Featured in the show are pieces by Yoko Ono, Joseph Dadoune and Jessica Mitrani, to name a few. Installations, video works, textiles and photography are among the works on display throughout the center’s “Insalaam Inshalom”-patterned walls. The performers at Sunday’s event included the Cyprus-born, New York-based director/choreographer Maria Hassabi, who wore cotton overalls from the Three as Four collection. Carrying a rolled-up rug on her slight frame, she slowly made her way down a flight of stairs into a cramped performance area, stopping every few seconds in different sculptural positions. Having arrived, she released the rug behind her back and wrapped herself in it as in a cape. At other moments she lay on it as well as under it as if it were a blanket.

As usual, Three as Four opted for a less formal fashion show, with a backgammon board acting as a centerpiece onstage, with mannequins dressed in pieces from the collection positioned around it. Models entered the central space to stand between the forms, then took turns walking over to a low table, sitting down, rolling the dice and moving the pieces of the board game. After each turn, one model would get up and take the place of another — a collective game of musical chairs.

“Fashion and beauty are tools to promote togetherness and unity in different countries and cultures,” Gil said. “We hope we can inspire other people to work together and not be scared of working together.”

The fashion collective’s members are themselves products of multiple cultures and identities: Asfour was born to parents from Mandate-era Haifa, who fled to Beirut; Gil was born and raised in Israel before moving to Germany and then New York; and Donhauser is a Soviet-born Russian-German who moved to Germany in childhood. Donhauser met Gil in Germany, and they met Asfour in New York, where they had moved to seek a more culturally diverse setting.

“I’m the middleman in the Middle East,” joked Donhauser, who adds that she’s glad she finally made it to Tel Aviv. “I’m closer to understanding how meshugeneh it all is. You shake your head and say: It’s all so human after all.”
(Tags: Art)