Nothing could be more logical than finding the biblical past at the crossroads of America’s family-friendly tourism and entertainment center. 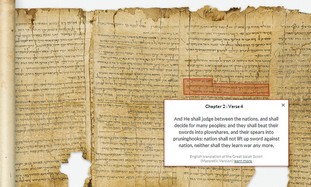 The writer is a research scholar with the Institute for Jewish and Community Research. (This article was first published by Jewish Ideas Daily and is reprinted with permission.)

In the basement of a converted theater on West 44th Street, tucked between the legendary Sardi’s restaurant and a bowling alley, a block from Times Square and across the street from the musical Memphis, is Discovery Times Square. A project of the Discovery Channel cable network, the space bills itself as “More than a Museum.” The setting is is an unusually apt location for an exhibit called Dead Sea Scrolls: Life and Faith in Biblical Times.

Discovery Times Square might seem like an unlikely place for this exhibit; indeed, putting ancient Jewish sectarian religious documents in such a venue, rather than a staid setting like the Metropolitan Museum uptown, may even seem gauche. But in fact, nothing could be more logical than finding the biblical past at the crossroads of America’s family-friendly tourism and entertainment center. The biblical world and the Dead Sea Scrolls have escaped the prison of high culture and now appear alongside an exhibit on the forensic sciences and the popular television show CSI.

At the beginning of the exhibit, images of the Dead Sea Scrolls projected on the walls and a live announcer in vaguely archaeological garb, intoning about “precious artifacts that link us in a chain to the past,” lead a visitor to expect some kind of multimedia experience.

Beyond this point, however, the presentation is static, made up of objects in display cases. The arrangement is carefully – indeed, intensely – plotted, to tell a story two parts ancient and one part modern.

The exhibit begins by displaying, and tastefully dispensing with, the most recent 2,500 years in the Holy Land. A small assortment of artifacts ranges backward from the Ottoman through the Roman period, with brief explanations of the post-Biblical era. The connection between modern and ancient Israel is alluded to but not overemphasized. Attention is paid to the Christian and Muslim eras, and even foreign interlopers like Philistines and Crusaders receive their due.

The heart of the exhibition, drawn from the collections of the Israel Antiquities Authority, conjoins two ancient elements. The first is the Biblical-era kingdoms of Israel and Judah. A superabundance of objects – storage jars standing shoulder-high, tiny carved seals with images visible only through magnifiers, pottery vessels of all shapes and sizes, stone weights and silver jewelry, pottery figurines, stone altars and ceramic bathtubs – speaks to the fabric of daily life and belief. Literacy, music, art and culture are presented attractively, if somewhat conventionally.

The materials tell a story of small kingdoms ultimately extinguished by empires.

THE SECOND element is the Dead Sea Scrolls themselves.

In a clever bit of design, visitors descend to a circular room with an immense circular display cabinet in its center. On a platform in the center of the cabinet stands a single jar in which scrolls were found – the omphalos, or navel, of the exhibition, figuratively and literally, around which the rest circles. The Scrolls themselves are in the cabinet, nestled darkly behind protective glass. One has to squint to see the actual parchment pieces, although enlarged backlit photographs give a better view of them.

The message could not be more clear: The Dead Sea Scrolls flowed seamlessly from ancient Israel, in a tradition unbroken despite the downfall of the kingdoms themselves.

The omphalos stands at the center of larger matters as well. Around the exterior of the room, visitors are taken on a journey that traverses the rise and fall of Jerusalem, daily life at Qumran, and the discovery of the scrolls there in 1947. Parts of this presentation are slightly too clever: A darkened alcove contains an image of the Ten Commandments. Press a button to light up and hear one – or press them all.

Cases toward the end display a poem attributed to the Persian Sufi mystic and poet Rumi, including the words “neither Christian nor Jew,” and fragments of Arabic inscriptions and carved stone crucifixes reflecting the “aspirations of diverse societies dwelling in the Land of Israel.” The exhibition cautiously states that the “Abrahamic faiths” – not just Judaism but, to some extent, Christianity and Islam – share “common roots in the Dead Sea Scrolls,” such as the idea of the “righteous teacher” and “a sense of the ideal Israel.”

This assertion contains several ecumenical leaps. The relationship of the Dead Sea Scrolls to Christianity has been hotly debated since their discovery. Are the Scrolls Jewish documents, illuminating the sectarian milieu from which Christianity emerged, or do they anticipate or even contain Christian beliefs? The relationship with Islam is even more complicated: Abraham indeed stands at the origin of Islam, but Islam claims him as the first Muslim. Nowhere are the supersessionist ideas of Christianity and Islam mentioned. Colossians 3:11, for example, uses words like Rumi’s – “here there is no Greek or Jew” – but adds, “Christ is all, and is in all.”

The exhibition politely and hopefully elides such issues and, intentionally, leaves the visitor with a warm sense of a shared past and future.

Tellingly, the story of Masada is presented in a hidden-away alcove; the Zealots and their demise, once viewed as central and heroic, have recently been revalued and, like the alcove, relegated to an unhappy dead end. In the exhibit’s final display, a live webcam shows the Western Wall plaza with the Temple Mount in the background.

A recorded female voice chants from the Torah.

Beyond the exit lies the gift shop.

Whether or not one agrees with the ecumenical message, there is something marvelous about the way a mass of familiar objects is rearranged to tell a story, a function of museums that is frequently neglected today in favor of “blockbuster” shows. The Dead Sea Scrolls have their blockbuster character, too; but in their earliest life they were intended to tell a story of faith and hope, and this exhibition skillfully does the same for the Scrolls’ later life. Doing so in Times Square puts their story, and the continuity of Israel and Jews, closer to the American mainstream and, thus, comprises another link in the chain.