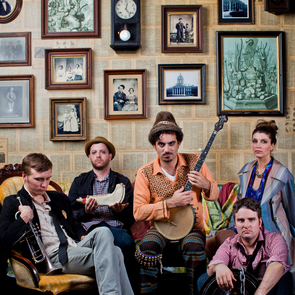 For Tremor Fantasma DeLeon takes their mission of modernizing Sephardic folk music one step further: for the first time in the 500-year life span of the genre, the music of the Jewish communities expelled during the Spanish Inquisition got crowdsourced. For their exhilarating third LP, DeLeon invited the international community of Sephardic folk music enthusiasts to assemble a playlist of songs for the full DeLeon treatment.

“Sephardic music has a small but enthusiastic fanbase all around the world,” says the creative force behind DeLeon, Dan Saks,”and I thought it would be great to involve our fans, and fans of the music in general, in this album.” So Saks filmed a video and then invited Sephardic music fans from around the globe to assemble a playlist of Sephardic songs on Spotify. Once the list got long enough, Saks began researching the selections and deciding how these age-old but still powerful songs could be reborn through DeLeon’s distinctive voice.

The folk songs in question come from far-flung places such as Spain, Greece and Turkey, and now find themselves in modern day Mexico City, where Saks recently relocated to continue honing a signature musical blend described by Soundroots.org as “a world of ethnic threads reaching deep into the past, but woven together into a hip garment that wouldn’t look out of place in even the hippest club.” The musical vocabulary of Tremor Fantasma marries junk drums, Appalachian banjo, Morricone guitars and mariachi trumpets with centuries-old tales of joy and sorrow sung in Ladino (Judeo-Spanish) and Hebrew, guaranteeing a record unlike anything you’ve ever heard before. Unless of course you’ve heard one of DeLeon’s previous two albums: their brilliant 2008 self-titled “breath of fresh air” (Austinist) debut and the acclaimed 2011 “stellar musical adventure” (Hot Indie News) Casata.

There’s a very good reason the album is titled Tremor Fantasma. “Shortly after I began working on this album, Mexico City was hit with a series of earthquakes — and then the local volcano Popocatépetl started acting up,” explains Saks. “I was experiencing phantom quakes in the studio and vivid volcanic dreams throughout the recording process. Being tuned into the instability of the very earth we walk on comes through to me when I listen to these recordings. This is our most organic and alive-sounding record yet.” Tremor Fantasma is a Spanglish allusion to those ghostly tremors.

Even though DeLeon has successfully marked out their own turf in today’s overcrowded music scene, they have managed to pair with other like-minded new-whirled bands on the road including Gogol Bordello, Os Mutantes, Balkan Beat Box and Ozomatli, to name a few. “We’ve found that audiences don’t need to understand an ancient language like Ladino to enjoy our shows,” says Saks. “They can relate to the emotion of the melodies and the undeniable grooves we put under them.”

Listen to the hymn “Ya Ribon Alam” to hear how DeLeon finds common ground between Shlomo Carlebach and Animal Collective. Or to “Hamavdil” to hear what it would sound like if Jamaica’s Wingless Angels went camping with Fleet Foxes. The old Turkish moral tale “Barminan” finds itself standing amid mariachis in Mexico City’s Plaza Garibaldi. Tremor Fantasma is full of these kinds of effortless cultural mash-ups that are bound to show the listener the joys of something old and something new, something foreign and something familiar, from a band uniquely adept at bridging the geographical and historical divide.