Far From Zion: In Search of a Global Jewish Community 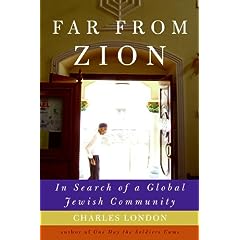 It was a question Charles London heard everywhere he went. Raised in a nonreligious Jewish family, London knew his heritage but had no strong desire to experience it personally. He even spent much of his teen years pretending not to be Jewish. But in the summer of 2004, while doing relief work with children in Bosnia, he stumbled upon a community the likes of which he had not seen before—where Jews worked alongside Muslims and Christians to rebuild a city ravaged by war. London liked this idea of a humanitarian Judaism, and though he didn’t realize it at the time, this encounter gave him the idea for a journey that would take him around the world and back to his roots.

The Jews’ frequent flights from persecution have seen the establishment of communities in some of the most surprising places, and despite efforts by Israel to bring these scattered people home to Zion, many have chosen to remain in the land of their birth. From a shopkeeper selling Jewish trinkets in Iran, to a Hanukkah celebration in an Arkansas bowling alley; from Rangoon, where a fifty-seven-year-old chain-smoking caretaker keeps watch over an all-but-forgotten synagogue, to an engineering professor in Cuba proud of his Jewish heritage, yet even prouder of his Communist ideals, pockets of the Diaspora endure, despite intense pressure to flee. Their decision to stay put offers hope that peace may lie not in congregating behind borders but in the promise of a global community of neighbors.

Far from Zion is the story of these Jews in far-flung places, and it’s through their experiences that London examines his own identity. As he explores widespread Jewish communities struggling with their relationship to the larger world, he too grapples with his heritage and comes to terms with his own connection to Zion.