Gatherings in Diaspora: Religious Communities and the New Immigration 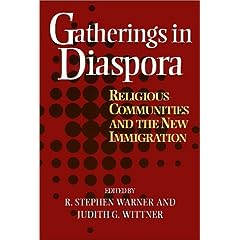 “Gatherings in Diaspora” brings together the latest chapters in the long-running chronicle of religion and immigration in the American experience. Today, as in the past, people migrating to the United States bring their religions with them, and their religious identities often mean more to them away from home, in their diaspora, than they did before. This book explores and analyzes the diverse religious communities of post-1965 diasporas: Christians, Jews, Muslims, Hindus, Rastafarians, and practitioners of Vodou, from countries such as China, Guatemala, Haiti, India, Iran, Jamaica, Korea, and Mexico.The contributors explore how, to a greater or lesser extent, immigrants and their offspring adapt their religious institutions to American conditions, often interacting with religious communities already established. The religious institutions they build, adapt, remodel, and adopt become worlds unto themselves, congregations, where new relations are forged within the community between men and women, parents and children, recent arrival and those longer settled. R. Stephen Warner, Professor of Sociology at the University of Illinois at Chicago, is the author of “New Wine in Old Wineskins: Evangelicals and Liberals in a Small-Town Church”. Judith G. Wittner is Associate Professor of Sociology and former Director of Women’s Studies at Loyola University of Chicago.