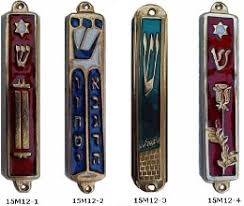 Hundreds of visitors pass through the vestibule of Jerusalem’s Great Synagogue and stop at the showcases to look at the beautiful collection of mezuzos. But how many of them realize the preciousness of this ingathering of mezuzos accumulated over many years, spanning the very history of the Jewish People? How each one became part of the collection and how this stock was begun is a story of its own.

The driving force behind this rare accumulation is Monsey, NY, resident Dr. Belle Rosenbaum. Rosenbaum began her collection as a young girl and painstakingly continued to expand it after her marriage, touring the world in search of mezuzah cases, and buying a great many. In time, dealers from all over sought her out, offering original cases with interesting historic backgrounds. Her collection swelled to some 5,000 mezuzah cases.

“I was the director-general of Heichal Shlomo,” Yeshayahu Barzel tells Mishpacha. “The Chief Rabbinate had left the premises, and we wanted to promote the establishment of a
Judaica exhibition, the largest of its kind in the world. As part of this plan, I found my way to Mrs. Rosenbaum, who was very enthusiastic about the idea and even agreed to donate her collection. When the project was abandoned, mainly because of lack of funds, the collection of mezuzah cases was transferred next door to the Great Synagogue, where it is currently on display.

Rebbe Nachman’s Mezuzah One of the showcases displays twelve identical mezuzos in a single frame, each of them engraved with the name of a different tribe. Behind these
lies a moving story of teshuvah, return to Torah Judaism. “The owner of this collection visited a Jewish craftsman who was totally removed from Judaism, but very skilled. She
showed him an artistic mezuzah case and asked him to create twelve similar ones without telling him for what purpose, but challenged him to ‘go to the Jewish library [which was not
far away] and find out why I want you to fashion the twelve cases I’ve just ordered. If you learn the reason, I’ll give you a bonus.’ ”

For the money, or perhaps out of curiosity, the artist did his homework and found out what was so significant in Judaism about the number twelve, learning that it represented, among other things, the twelve tribes. Using this information, he crafted the twelve cases, each bearing the name of one of the tribes. The research on this project aroused an interest in his heritage and within a short time, he was attending shiurim and learning things he had never before been exposed to, which eventually led to his becoming a baal teshuvah. Today he is a chareidi artist living in New York who feels greatly indebted to Mrs. Rosenbaum for having introduced him to his own birthright.

We walk on to a showcase exhibiting different, somewhat strange mezuzah cases. “Which is the plainest one here?” asks Yeshayahu, and he goes on to tell us an interesting story about a very unattractive, coarse wooden case, which challenges any spectator to understand why it was placed in its decorative display case.

On Erev Rosh HaShanah, 1808, the followers of Rebbe Nachman of Breslov presented their Rebbe with a gift— a wooden chair carved with the figures of birds and beasts mentioned in Tanach, surrounding the Tree of Life in Gan Eden. After the Rebbe passed away, his chassidim hid the chair and guarded it carefully. When the Communists rose to power, the Breslov chassidim dismantled the chair into small parts and deposited it with the Rosenfeld family of Kremenchug. In 1936 Reb Moshe Ber Rosenfeld brought the chair, still disassembled, to Jerusalem, where it was restored in 1959 by craftsmen from the Israel Museum. In 1984 it was again refurbished by Katriel’s of Jerusalem, a challenging task because some of the wood had already become rotten and cracked. Yet it stands, whole, on display in Jerusalem.

Mrs. Rosenbaum approached the carpenter and asked him to make her a simple mezuzah case for her collection from a piece of the discarded wood. But this was no simple request, as the chassidim had lovingly gathered every single scrap of extra wood as keepsakes, dividing these among themselves. After considerable effort, however, she succeeded in obtaining a piece, which was made into
a plain wood mezuzah. Taking a close look, one can see the ravages of time on the wood.

A Flat Mezuzah One of the most remarkable mezuzah cases in this collection is both distinctive and strange. The story it involves Rav Amram Ben-Diwan, a distinguished Torah
scholar sent from Eretz Yisrael to Morocco to raise funds for Jerusalem’s Yishuv. He arrived in Morocco in 1743 and received a royal welcome, so much so that the community
begged him to remain as their Rav. He agreed, and served them faithfully until his death in
1782. He was buried in Ouezzane, Morocco. The members of that kehillah are fond of relating that years later, the princess of Morocco became very ill and the doctors despaired of curing her. The king turned to his Jewish subjects and pleaded them to pray for her recovery, whereupon the Rav suggested to go and pray at the grave of Rav Amram. The road to the cemetery was stony, muddy, and very neglected. The king and the Rav reached the grave and the Rav began his prayers, which were soon answered. The princess recovered and the king ordered the road paved and a mausoleum erected over the grave of the tzaddik. This soon became a popular prayer site, especially on Lag B’Omer, when masses come to pray and celebrate. And now to the mezuzah: the scroll inside is not rolled up, as is customary, but lies flat, bearing an inscription dedicating it to the memory of Rav Amram, a plaque of honor from the king of Moroco.

The next one in exhibit (45) tells of the glorious past of the Venetian kehillah. A New York Jew visited this Italian community in 1950 and discovered an old building that had once served as a Jewish school. The custodian opened it up for him and he beheld a mezuzah on the doorpost. He received permission to put in a new one, since the old one was beginning to disintegrate with age. The mezuzah he removed was, in fact, over 200 years old. The parchment was cracked and illegible; but the design of the case was unususal. It fit the architectural style of that period. This mezuzah is a keepsake of the Venetian
Jewish community, which was once able to fill five splendid shuls and maintain a complex of educational and charity institutions up until the Holocaust.

A Mezuzah and a Canvas The next display shows a very rare mezuzah case shaped like a fish. This comes all the way from the Jewish community of Kaiping in the Guangdongprovince of China. The Jews living there established a busy textile industry and helped develop the silk commerce, which contributed to China’s wealth. The Jewish community was far removed from any other Jewish center, but thrived and expanded, nonetheless. However, inevitable intermarriage and assimilation led to its total obliteration. The Diaspora Museum in Tel Aviv held an exhibit on Chinese Jewry in 1985,
most of it was comprised of photographs of the past. Among the artifacts exhibited, however, was an ivory mezuzah case shaped like a fish, reminiscent of the verse, “And they shall multiply like fish … ,” which graced the doorpost of the building that had served as a shul.

Moving on, the next mezuzah case is unlike any other. This served the Anusim community in Portugal that retained certain practices reminiscent of Jewish customs. It is believed that they stem from the original Anusim who tried in every way possible to covertly preserve Jewish practices and festivals in underground cellars for fear of discovery by the Inquistion. This Belmonte mezuzah is an excellent example, since it has
the form of the widespread idolatry practiced by the Catholics. But among its folds, very carefully concealed and camouflaged, the Anusim managed to insert a mezuzah without rousing any suspicion. On the surface, it is a painting of a girl going out to draw water from a well, the mezuzah hidden in a depicted tree.

In 1944, President Franklin Roosevelt permitted a small quota of 1,000 Jews to enter the US, but they were first interned in a transit camp in Oswego, New York, with the intent of sending them back to their countries of origin at the end of the war. They were lucky, however, and were eventually granted US citizenship. The Jews in the Oswego camp saw to it that a mezuzah be affixed on the entrance. This one is not decorative in any way, but has historical significance. It is made of simple wood and has a paper pasted with the name of Hashem on the outside. It is a testimony to the fact that Jews have always felt
protected by their mezuzos and displayed them accordingly.

A Mezuzah in a Space Craft Even under the harshest conditions, Jews have not forgotten the mezuzah. In the artist colony of Ein Hod on the western slopes of Mount Carmel,
Shalom, an elderly, taciturn man is selling mezuzos and other Judaica items. All of them are, strangely, very much the same. When Rosenbaum asks him why, he agrees to tell her the story behind them.

Shalom is a Holocaust survivor; back in Poland he was a sofer sta”m until he and his family were sent to a concentration camp. Shalom managed to smuggle in the tools of his trade, and succeeded in producing several kosher mezuzos right inside the camp for the prisoners to affix to the doorposts of their barracks. Obviously, these had to be hidden from the Nazis, so the prisoners rolled up the parchments in brown paper, which
sufficiently camouflaged their existence. At the end of the war, Shalom was one of the few survivors from his town; his family had been entirely exterminated. When he came to Eretz
Yisrael, he decided to continue producing these mezuzah cases in memory of those who died. The case itself is metal and rolled up on both sides like the brown paper wrappings that were used in the camps.

The wars in Eretz Yisrael also affected the production ofmezuzah cases, one of which is displayed in this collection. It was inspired by the Six Day War and created from the shells of the bullets fired at the enemy. The parchment was inserted inside and it is a kosher mezuzah for all purposes. These received an added adornment in the shape of a Magen David affixed on the front and were very popular in that period. And then there is the mezuzah from outer space, having been aboard Discovery in 1985. Jeffrey Hoffman, the first Jew in space, took along four mezuzos designed especially for the occasion, three of them by artist Marcia Penzer from New York. Unique about these are the verses from Tehillim expressing the grandeur of the universe. The moon and the stars are also painted on them. The fourth mezuzah was designed by Israeli artist Shirley Kagan and is shaped like a roof upon which is inscribed a section of the Dead Sea Scrolls found in the Judean Desert’s Qumran caves. This is made from gold-plated glass. The original mezuzos that went to outer space and returned are on display in the Jewish Museum in New York and the Israel Museum in Jerusalem.