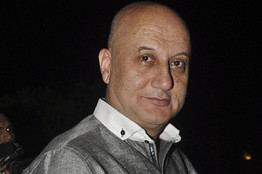 Anupam Kher decided to cede to his fans wishes and drop out of “My Friend Hitler.”

Film actors often say they have their fans to thank for their success, but how many actually act — or decide not to act — upon their fans’ suggestions? Veteran Bollywood film actor Anupam Kher, who by his own estimate has appeared in about 400 films over 26 years, does.

Mr. Kher, who was supposed to play Adolf Hitler in an upcoming film called “Dear Friend Hitler,” decided to opt out of the lead role after criticism from his fans and the Israeli community, who were unhappy to find Bollywood making a movie on the Nazi dictator responsible for the worst genocide in history.

An AFP report said the film, announced earlier this month, would be directed by debutante director Rakesh Ranjan Kumar and would also focus on Hitler’s relationship with lover Eva Braun, to be played by Bollywood starlet Neha Dhupia. The title of the film is a reference to letters written by Mahatma Gandhi to Hitler, in which the peace icon addresses the dictator as “Dear Friend Hitler,” the AFP report said.

Mr. Kher told his fans on Twitter a week ago that the film would portray Hitler as “a brutal, inhuman and self obsessed being. It is the story of his last few days.” But many still questioned Mr. Kher, who may be best known by western audiences for his appearance in “Bend it Like Beckham,” on his association with the film.

“I just don’t understand how a man like him would agree to be in a film like Dear Friend Hitler,” tweeted an irate @pariism from Switzerland.

“I am a proud Indian and assert my Indian identity everywhere I go in Israel. I tell fellow Israelis that in my birthplace there was no anti-Semitism,” said Noah Massil, president of the Central Organisation of Indian Jews in Israel, according to a Press Trust of India report Tuesday. “However, I am having to bow my head in shame at this recent ignorance shown by Bollywood, which is also very dear to us.”

Announcing his withdrawal on Thursday night on the micro-blog Twitter, Mr. Kher tweeted, “Sometimes human emotions are more important than cinema:). I withdrew from Hitler film.”

The decision to pull out of the yet-to-begin project was met with relief among his audience.

Fan @arvindganti wrote: “It was an honest decision to respect the sentiments of people and I respect you for that!” Another Twitter user, @bhaskarchat wrote, “You have done good by withdrawing from the movie.”

@amiralovesrani wrote: “I am very happy that u resigned doing this film. The movie is kind of hurting my feelings to my country. So big thank u sir!”

However, there were others who wondered if the reason Mr. Kher dropped out really had to do with respecting people’s feelings. “Is it that you found playing Hitler way too challenging?” asked @nitinkapoor.

Debutante director Rakesh Ranjan Kumar may still decide to go ahead with the project, even without Mr. Kher. Mr. Kher and others associated with the project could not immediately be reached for comment but an Israeli diplomat had this recommendation for Mr. Kumar.

“We would hope that the film will depict this dictator in his true light as a bestial blot on mankind,” David Goldfarb, spokesman for the Israeli embassy in New Delhi, told India Real Time on Friday. “Any other depiction of Hitler would defile the memory of the six million Jews and countless other innocent men, women and children who he massacred in cold blood.”
(Tags: Entertainment, Media, India, Holocaust)