Two young women, one a traditional Muslim, the other from an observant reform Jewish background, have “traded places” for the ABC documentary series “Holy Switch”, and share glowing reports of the experience. 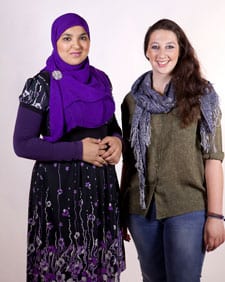 For two weeks, Jordane Hyams from Melbourne, and Mobinah Ahmad from Sydney switched lives. While Mobinah stayed with Reform Rabbi Fred Morgan from Jordanes’s Netzer schul, Jordane lived with Mobinah’s large family in Sydney’s Western suburbs.
For Mobinah, “It was a life-changing experience. I can’t say enough how beautiful it was!”
A year after the show was filmed, Mobinah is still in contact with the family of Rabbi Morgan who she considers to be “an amazing religious leader”. She feels very close to the Morgan family, both spiritually and personally. Even her parents have gotten together with the Morgans whom she calls “my family in Melbourne”, and “they got on really well. It was just lovely”.
For Jordane the experience was “fantastic, very interesting learning about Muslim practices, and a very nice process”. Her host mother was “gorgeous”, the family was lovely and so sweet, the ceremonies that she participated in,like the morning call to prayer, the communal dinners with the large extended family were “beautiful”.
While Jordane comes from the liberal end of the religious spectrum and Mobinah from the traditional end, they had many shared values. Both joined the project with a sense of curiosity and open-mindedness, a commitment to multifaith values of respect and dialogue. But though both considered themselves to be quite knowledgeable on other religions, there were still surprises in store.
For Mobinah, “a big learning point was that there is a big difference between Orthodox and Reform, and that not everyone can be put in the same set of beliefs”.
Jordane was surprised to find that how closely related Islamic beliefs were to Judaism, that her host family accept that Moses was a prophet and that they see merit in all the holy texts.
Neither felt challenged in their own beliefs and cultures, but agreed that no matter how much theoretical knowledge you have, actually living the life is totally different, leading to greater mutual understanding and respect.
For Jordane however, there was one “full on” experience which was unpleasant and left her feeling “like a fish out of water”. As a liberal Jew with a commitment to peace-building, she was obviously keen to play down any negativity, always stressing that Islam was essentially a religion of peace. She was invited and went to a pro-Syrian rally not knowing what to expect. She told J-Wire that, as the evening wore on “inevitably, I guess the content became essentially, anti-Zionist”. Feeling uncomfortable she left early. Discussing the issue later with some of Mobinah’s friends later calmed her down, even though in the end they agreed to disagree.
The ABC wants the program to be a “surprise” for the participants so Jordane and Mobinah are yet to view the episode and are looking forward to it with mixed feelings of excitement and trepidation. The ABC has assured them that the program will focus on the positive…an outcome that the two women would prefer. Tune in to see if the ABC will be able to resist the temptation to generate conflict and sensationalism or whether they will pull an Unholy Switcheroo.
The program will air on ABC-1 on Sunday May-26 at 6:30pm.
(Tags: Muslim, Jewish, Entertainment)