In music, tracing the 600-year odyssey of the Sarajevo Haggadah 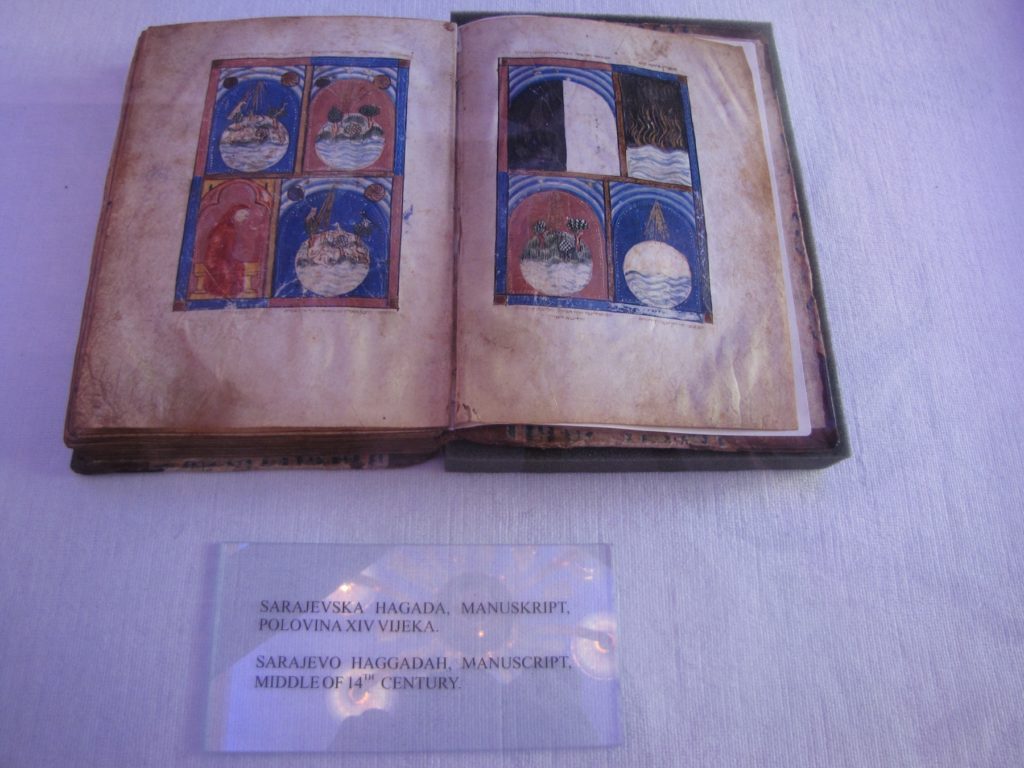 BOSTON (JTA) — Growing up in Bosnia, Merima Kljuco was familiar with the Sarajevo Haggadah.
The medieval, illuminated manuscript was considered a treasure of the Bosnian National Museum for more than a century. Its 600-year journey from Spain through Italy and then Sarajevo, and its survival through persecution and near destruction at the hands of enemies of Jews, heightened its wonderment.
But four years ago, a friend gave Kljuco a copy of “People of the Book,” the acclaimed 2008 historical novel about the Sarajevo Haggadah by Geraldine Brooks, a Pulitzer Prize-winning writer who reported on the Bosnian war for The Wall Street Journal.
Kljuco’s interest in the Haggadah was transformed from fascination to creative passion.
“I became obsessed with the idea of a project that would musically and visually follow the Haggadah’s journey from Spain to Sarajevo,” Kljuco told JTA.
The Haggadah’s odyssey also reminded Kljuco of her own life and “exodus,” having been forced to leave her country, she said in an email, “under the strangest and heaviest circumstances.”
Now Kljuco, an internationally acclaimed concert accordionist, has composed a piece of music that gives voice to the Sarajevo Haggadah’s trek.
“The Sarajevo Haggadah: Music of the Book” is a multimedia presentation, an artistic collaboration of Kljuco, pianist Seth Knopp and Bart Woodstrup, an artist who created a visual animation that accompanies the concert.
The composition, commissioned by the Foundation for Jewish Culture’s New Jewish Culture Network, had its world premiere to sold out-audiences at the end of March. The first was at Yellow Barn, a prominent center for chamber music in Putney, Vt., where Kljuco developed the piece in an earlier residency, and then at the Boston Jewish Music Festival in partnership with New Center for the Arts.
Upcoming performances on a North American tour include Dallas, San Francisco, Toronto and Austin, Texas.
The composition reflects the foundation’s vision to support cultural works that are accessible to audiences of all backgrounds, according to Andrew Ingall, former director of its New Jewish Culture Network.
“The music is contemporary but also reflects Sephardic music traditions,” Ingall wrote in an email. “It communicates the wonders, traumas and geographic journeys of this remarkable codex.”
While the Foundation for Jewish Culture closed earlier this year due to funding problems, Ingall is traveling to many of the Sarajevo Haggadah performances.

The mesmerizing one-hour piece is divided into 12 movements that trace the Haggadah’s history, from playful Sephardic melodies and dances to nearly silent, prayer-like tones and then harsh, brutal rhythms that erupt from Knopf’s piano.
During an emotional passage on the Siege of Sarajevo, Kljuco’s accordion nearly weeps. Woodstrup’s visual images, which include illustrations from the Haggadah, are projected onto a long white sheet, as if it were a seder table covering.
At the Boston performance, Brooks offered introductory remarks and later joined Kljuco for an onstage interview. The two met that evening for the first time.
“It is an amazing experience to be part of the transmission of inspiration in this way,” Brooks told JTA the day after the concert. In an email, she described her contribution as a tiny link in a creative chain.
“Now Merima and her collaborators have extended the chain,” she wrote.
The Sarajevo Haggadah stands out among others of its time in several ways, according to Aleksandra Buncic, an art historian and a scholar born and raised in Sarajevo.
Produced in the Crown of Aragon between 1330 and 1350, the Haggadah features the most complete illuminated cycle of biblical events, from the Book of Genesis as well as Exodus, Buncic told JTA in a phone conversation from Philadelphia, where she is a Fulbright scholar. It also illuminates all seven days of the creation of the world, which is not found in any other example of Jewish art through the Middle Ages, she added.
The Haggadah was presumed to have been smuggled out of Spain and survived the 1492 Expulsion of Jews, and later, in Venice, was spared the fate of being burned by the pope’s inquisitor.
At the end of the 19th century, the Haggadah, which found its way to Sarajevo, the source of its name, was sold to the Bosnian National Museum by its Jewish owners. Twice during the 20th century it was saved by Muslims there at great risk to their lives — once by Dervis Korkut from the hands of the Nazis, and more recently in the mid-1990s by Enver Imamovic during the deadly years of the Siege of Sarajevo.
Kljuco grew up in the former Yugoslavia but left her home in 1993 during the Bosnian War. She spent time in refugee camps, a painful memory to this day, she said in the email.
“The Haggadah … suffered transformations which make it even more special by giving it a richer history that reflects it passage through different cultures,” Kljuco wrote. “I also travel around the world and with every journey I get a new ‘scar,’ positive or negative. But I keep my dignity and get richer by traveling through different circumstances and sharing culture with others through my music.”
In the former Yugoslavia, Kljuco was exposed to an array of musical styles. She began playing accordion, the leading instrument, at an early age, “falling in love at first sound.”
Hailed for her virtuosity, Kljuco performs around the world with symphony and chamber orchestras. She now makes her home in Los Angeles.
Kljuco has become steeped in Sephardic and Yiddish music through her many collaborations with Shura Lipovsky, an international performer of Yiddish song, the Jewish folk balladeer Theodore Bikel, and the late pianist and composer Tamara Brooks, to whom she dedicated her composition.
“They all became my musical family,” she said.
Buncic, who attended the Yellow Barn performance, was impressed with the composition’s opening moment, when Kljuco makes her accordion sound like the wind. It is a perfect match with the first illumination of the Haggadah, she said.
The Sarajevo Haggadah, nearly 700 years after its production, still evokes the interest and inspiration among scholars, artists, composers and layman, Buncic said.
“This composition,” she said, “means there is an interest among the people about this fascinating manuscript.”