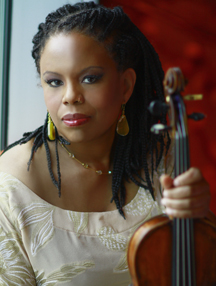 Internationally acclaimed violinist Regina Carter will perform in concert at Wabash College on Wednesday, October 19 at 8:00 p.m. in Salter Hall in the Fine Arts Center.
Tickets to the concert are free, but should be reserved in advance through email (boxoffice@wabash.edu) or by calling 765-361-6411. The box office opens at 6:30 p.m. on the night of the concert.
The New York Times says, “Ms. Carter is enormously gifted, bringing a blues sensibility to her improvisations,” and Time Magazine wrote, “Regina Carter creates music that is wonderfully listenable, probingly intelligent and, at times, breathtakingly daring… taking the listener into the future of jazz.”
Her concert at Wabash College is sponsored by the Visiting Artists Series. Her playlist for the evening will be announced from the stage, but will borrow heavily from her latest album release, Reverse Thread.

When Carter made the decision to record the album consisting primarily of African folk tunes, she created a great challenge for herself: how do you take beautiful traditional music and infuse it with a contemporary feel while remaining true to its past — and then, not compromise its beauty? Reverse Thread, which came out in May, brilliantly responds to the challenge.

To achieve the uplifting and stirring result, Carter added an accordion and kora—the West African harp traditionally played by village storytellers—to her longstanding rhythm section. Kora virtuoso Yacouba Sissoko was brought on board to help recreate the spirit of passing stories from generation to generation. The result—unlike anything previously heard—is a haunting and beautiful compliment to Carter’s seductive violin.

Accordionist Will Holshuser, bassist Chris Lightcap, and percussionist Alvester Garnett will accompany Carter and Sissoko in their concert at Wabash.

Carter received the prestigious MacArthur Fellowship, commonly known as a “genius grant,” which allowed her the freedom and funds to develop Reverse Thread. Before writing the pieces, she turned to the World Music Institute in New York City, where she found a diverse and inspirational resource for material, including ethnographic field recordings.

“There is an immense amount of amazing music coming from all around the world, much of which is barely accessible,” Carter said. “Reverse Thread gave me the opportunity to explore and celebrate a tiny portion of music that moved me.”

Both “Hiwumbe Awumba” and “Mwana Talitambula” are based on field recordings from the Ugandan Jews, a community in eastern Uganda who although are not genetically or historically Jewish, practice the Jewish religion. Setting the inspirational tone for the album, the first track “Hiwumbe Awumba” originates from a field recording of a group singing, “God creates and then He destroys.” Although the title is dark, the uplifting quality and spirit of the voice on the recording inspired Carter, and the final arrangement is a paean to the resiliency of the human spirit.

Using the field recording of a woman singing “Mwana Talitambula” as a departure point, bassist Chris Lightcap split the melody between the violin and bass with a hypnotically emotive result.

Reverse Thread also embraces music of the African Diaspora, including “Un Aguinaldo,” which skillfully layers the rhythmic aspects of African music with harmonies originating in India and Puerto Rico.

Through her albums, incessant touring, and various guest appearances and collaborations, Carter has developed into a distinctly diverse musical personality. She was the first jazz artist and African American to play Niccolo Paganini’s famed Guarneri “Cannon” violin, has been featured with several symphony orchestras, and performed with artists as diverse as Aretha Franklin, Lauryn Hill, Billy Joel, Kenny Barron and Mary J. Blige.

Carter is managed by Darryl Pitt of Depth of Field Management and her tour is booked by Myles Weinstein of Unlimited Myles, Inc.