In its quest to be a home for more than the standard chamber music repertory, Bargemusic has beefed up its new-music offerings, by way of its Here and Now concerts. And though Mark Peskanov, Bargemusic’s artistic director, has said that he is less conversant with early music, he has now started a second series, There and Then, to explore that repertory too. 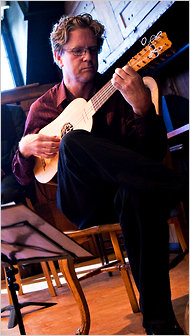 The New York Consort of Viols performed at Bargemusic in Brooklyn on Sunday, with Grant Herreid playing the vihuela.

The New York Consort of Viols has made several contributions to the barge’s early-music efforts, including a program on Sunday afternoon, “The Road From Valencia,” devoted partly to Renaissance works by Jewish composers and viol players who made their way from Spain (after the expulsion of 1492) to Italy and England, where several worked at the court of Henry VIII.

The earliest of the Jewish works was a group of anonymous Sephardic ballads. “Montañas Verdes” and “Los Gayos Empesan a Cantar” were presented as melancholy, gracefully ornamented viol solos. “Noches, Noches” and “La Comida de la Mañana” were sung by Grant Herreid, the first without accompaniment and the second supported by tambourine (played by Mr. Herreid) and treble, tenor and bass viol. Mr. Herreid’s voice is modest and sometimes skirts the edges of intonation. But he phrases artfully and with a folksy charm that suits this music.

Mr. Herreid also has other talents, including a facility with a small arsenal of instruments. He played the cornetto in the anonymous opening work, “Viv’el Gran Re Don Fernando,” as well as the vihuela (a Spanish ancestor of the guitar) and the lute, on which he performed deftly in both solo and ensemble works throughout the program, and the recorder, with which he enlivened Joan Ambrosio Dalza’s rhythmically vital “Piva.”

Music by non-Jewish composers — Luis de Narvaez and Diego Ortiz among the Spaniards, Dalza and Francesco da Milano, from Italy, and Henry VIII — was also included, partly for context but also, presumably, because their works were better known than those of the Italian composer Giovanni Bassano and the English composer Thomas Lupo, both now thought by some scholars to have been Jewish.

But Bassano and Lupo’s seamlessly contrapuntal fantasias for three viols stood up well beside the music of their more famous colleagues. A pair of contemporary works, David Loeb’s intricate neo-Renaissance “Fantasia Sobre Nani, Nani” (1986), and Paul Ben-Haim’s “Puncha, Puncha” (1970), a vocal work with a clear Sephardic lineage, gave the program a modern coda.

The music was framed in texts — among them, historical documents from 15th-century Spain (most notably the Edict of Expulsion); an amusing set of observations about dance by an Italian dancing master, Guglielmo the Jew; and Bertram Gross’s fascinating speculative fantasy about Shakespeare’s having secretly been Jewish — in readings by John Genke. The fine viola da gamba players were Lesley Retzer, Lucy Bardo and Judith Davidoff, who directs the ensemble.

Bargemusic presents the violinist Mark Peskanov and the pianist Steven Beck on Thursday at Fulton Ferry Landing next to the Brooklyn Bridge, Brooklyn; (718) 624-2083, bargemusic.org.