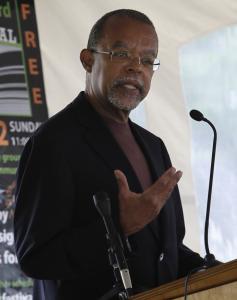 Henry Louis Gates is pictured in August 2009, less than a month after his arrest by the Cambridge Police.

Remember the incident in which James Crowley, a white Cambridge Police sergeant, arrested prominent African-American Harvard professor Henry Louis Gates at his own home, causing a firestorm of controversy across the nation, exacerbated by President Obama’s claim that Crowley had “acted stupidly’’ and defused somewhat by Obama’s White House “beer summit’’?

Of course you do. The arrest that sparked the hullabaloo happened only one year ago today. And already we have a book about the affair.

To mark the anniversary, Charles Ogletree — the Jesse Climenko professor of law at Harvard Law School, and Gates’s attorney — has released “The Presumption of Guilt: The Arrest of Henry Louis Gates and Race, Class, and Crime in America.’’ If you’re wondering how Ogletree could manage to write a whole book about an incident that happened so recently, the answer is that he really hasn’t, at least not in the sense that the entire volume consists of a detailed examination of the events of July 16, 2009, and the days following.

The book does include an opening chapter about the arrest itself, including an analysis of Crowley’s police report and the 911 call that brought the officer to the scene, and a second chapter that details President Obama’s reaction to the incident (and the nation’s reaction to Obama’s reaction). But Ogletree’s book is really about the persistent problem of racial profiling in the United States. Following chapters on Rodney King, racial profiling incidents at Harvard, and the problem of “Driving While Black,’’ Ogletree concludes: “[I]t is imperative that we as a society look more broadly at what we need to give police and citizens to ensure that no one is subjected to racial profiling and that police vigilantly pursue their jobs with enthusiasm and a focus on preventing and addressing crimes in our communities.’’

In an epilogue that is nearly as long as the rest of the book, Ogletree collects stories from professional African-American men who have been victimized by racial profiling. The stories are disturbing and terrifying. Reading the accounts of these lawyers and judges and actors and professors and businessmen, we learn that class is no defense against racism. It is striking how often the men involved say that the police’s failure to provide apologies following incidents of profiling adds insult to injury. Indeed, as one of his many recommendations for reform, Ogletree argues that there “needs to be a process of, at a minimum, public apology if not actual financial payment for mistakes, since many people will accept such steps as an acknowledgment of errors by police.’’ The proposal is sound.

One thing about the Gates incident is clear: Whites and African-Americans have viewed responsibility for the event differently. According to a Wall Street Journal/NBC poll taken in late July last year, for instance, only 4 percent of African-Americans believed that Gates was primarily at fault, while 30 percent pointed fingers at Crowley. Whites, on the other hand, were much more likely to blame Gates, with 32 percent claiming that the professor was at fault and only 7 percent blaming the officer. Reaction to Obama’s reaction was also split on racial lines; as Ogletree reports, 63 percent of whites but only 26 percent of African-Americans believed that Obama “acted stupidly’’ by saying that Crowley had “acted stupidly.’’

“If the arrest of Professor Henry Louis Gates, Jr., proves anything,’’ Ogletree concludes, “it is that America has not achieved its goal of being a post-racial society.’’ Given the racially polarized reaction to the arrest, it’s hard to disagree with that.