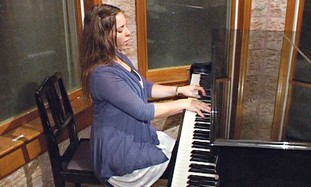 A 22-year-old pianist from the Gush Etzion settlement of Neveh Daniel has become the latest YouTube phenomenon with her pro-Israel hasbara song “Only Israel.”

Yedida Freilich, a composition student at the capital’s Rubin Academy of Music and Dance, wrote the mournful piano ballad along with her father, Gabby, and brother Yuval, following the Gaza flotilla incident last month. In only two weeks, the video has attracted over 350,000 views on YouTube and turned Freilich into a celebrity in nationalist circles.

“The song transpired by chance,” Gabby Freilich told The Jerusalem Post this week from Australia, where he was visiting family. “One of Yedida’s projects in school was to compose a musical piece for a political song. As it happened, the assignment fell on the same week as the flotilla.”

Freilich said he was moved to write down lyrics after seeing the world’s reaction to the IDF raid on the Mavi Marmara, which left nine passengers dead.

“Yedida, myself and my son Yuval sat around the kitchen table, and I came up with some English lyrics, and they added some Hebrew and we put together what we wanted to say – basically other nations can do what’s in their interest, but only Israel isn’t able to,” he said.

“Then Yedida put it to music.

It didn’t take her very long.”

The video clip of her moving performance on piano and vocals, with lyrics switching between English and Hebrew, is juxtaposed with images of Kassam rockets, St.-Sgt. Gilad Schalit, Iranian President Mahmoud Ahmadinejad, judge Richard Goldstone and the Mavi Marmara.

The lyrics decry the double standard Freilich says Israel faces when trying to defend itself, and includes couplets such as “Eight thousand rockets is no excuse / suicide bombers, it’s all just a ruse” and a Hebrew chorus of “Darfur is ignored, Russian troops in Chechnya, only Israel has no right to defend itself, because the world cares nothing about Jewish blood.”

“It was obvious to me that this was a hasbara [public diplomacy] song. Our efforts at explaining what happened with the flotilla were so appalling, and this did so well in explaining our positions, I knew it had to go on YouTube,” said Freilich.

He found a professional videographer, Daniel Sass, who volunteered his time, and together they chose the images and produced the clip.

Freilich insisted that the song appear with English, Hebrew and Arabic subtitles.

“I thought that it was important that the Arabs would be able to understand it,” he said.

“I think it’s a powerful song and a great tune. Yedida sings it from the heart. You can tell she’s involved in the lyrics and the performance, because it’s part of her life – her friends and her family are involved.”

Yedida was raised in Neveh Daniel – a community of around 1,500 residents south of Jerusalem with a large English-speaking religious population – where Freilich and his wife moved soon after immigrating from Sydney 25 years ago. He said that Yedida, one of six Freilich children, began playing the piano when she was twoyears- old. She attended the Rubin Academy High School and was part of an IDF band during her military service.

“Wherever there was an outpost of soldiers, her idea was to take a group and go play there.

She’s played on every border, whether to a handful of soldiers or a thousand. She was chosen to play at a reunion of the Palmah before 12,000 people, and she’s performed at Auschwitz for officers from the National Military Academy,” said Freilich.

He wasn’t surprised by the sudden popularity of “Only Israel,” chalking it up to not only the message of the lyrics, but to Yedida’s unaffected, emotional performance.

“Yedida is a completely open and sincere girl, and the dichotomy of those images being presented in that way, with no tattoos, lights and strobes, just her playing the piano, that honesty is transparent even if you don’t know her,” he said.

When Yedida presented the song as her class assignment, however, there wasn’t unanimous praise.

“Some people at the Rubin Academy were pretty shocked.

It’s a place where nobody hangs their political banners out. I’d say that almost everyone turned out to be really supportive, but one of her early mentors was appalled that she chose music to present a ‘horrific’ political message,” said Freilich.

Freilich, a radiologist, said that “Only Israel” was his first foray into hasbara.

“I had never considered it, because like almost every other Israeli, I could never say it as well as people who really know what they’re talking about. But I knew that my daughter could say it with emotion and from the heart better than anyone else,” he said.

“My hope for the song is that it achieves the aims of waking people up and opening their eyes to the situation Israel is in, and seeing the reality of what we’re facing. It’s a reality that Yedida, her friends and the whole country goes through. If it does something good for Israel, that would be a great thing.”
(Tags: Israel, Music, Politics)