An exhibit at a San Francisco museum unites Jews and African-Americans through music. 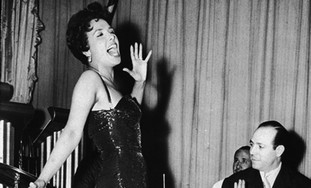 The recording is clearly decades old. As the music builds, a tearful, soulful voice begins to sing the lilting strains of the legendary “My Yiddishe Mama.”

Is it Fanny Brice? Sophie Tucker? Neither.

This haunting Jewish melody is performed by Lady Day, the great Billie Holiday, an African-American woman whose painful, hard-knock life expressed itself through song.

Holiday’s stunning rendition of this classic tune is one of dozens of recordings that visitors to the Contemporary Jewish Museum in San Francisco can listen to at their leisure.

The exhibit comes to the CJM courtesy of David Katznelson, who last year presented CJM’s “Jews on Vinyl.”

The earlier show received an impressive 70,000 visitors during its six-month run. Katznelson, who has a background in producing rock ‘n’ roll, has also been the director of outreach and engagement for the Bay Area’s Jewish Community Federation.

The exhibit is the result of years of painstaking research, which often included restoring sound quality to longunheard recordings that are, in some cases, nearly a century old.

Some of the tunes are light and frothy, such as Eartha Kitt’s rendition of “Sholem,” an English piece she performed to the orchestrations of “Hava Nagila” As always, she sings in her unmistakable kittenish purr.

There’s also a lovely Fiddler on the Roof medley offered by the 1960s soul group The Temptations.

They perform in their trademark falsettos, adding a new, somewhat jazzy dimension to familiar songs like “Sunrise, Sunset” and “Matchmaker, Matchmaker.”

The exhibit will be on display on CJM’s second floor until March 22, 2011. Museum guests can peruse the many album covers that grace the walls of the comfortable, softly lit room that houses the Black Sabbath exhibit. Or they can sit at any of the listening stations and choose which of the dozens of selections they’d like to hear.

Black Sabbath also offers an accompanying CD. The 15 CD selections include the Holiday, Scott and Mathis cuts, as well as Cab Calloway’s lovely take on “Otta Zoy,” a long-forgotten Yiddish tune. The disc includes a 40-page book that offers valuable back-story information on the singers and their songs. The CD is available in the CJM gift shop, and the museum will ship to anywhere in the world.