Stirred but not shaken 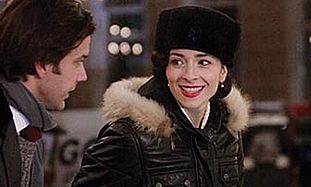 The show must go on – that’s the word from the organizers of the 8th Jewish Eye Festival, the World Jewish Film Festival held each year in Ashkelon, which opens on November 13 and runs until the 21st. In spite of the missiles falling in the South and on Ashkelon in particular, the festival will be held as planned, with the participation of filmmakers from Israel and around the world. The festival features 80 films from more than 20 countries – features, documentaries and shorts that all have a Jewish theme. In addition to the films, there will be a number of special programs, such as a salute to Yiddish films and Jewish music.

The guest of honor is Branko Ivanda, the director of the opening-night film, Lea and Darija.
The Croatian director’s latest film is about two teenage girls who were singing and dancing stars in Zagreb on the eve of World War II. When the Nazis move in, their friendship solidifies as they fight persecution. Ivanda also made a documentary about this story, Children’s Kingdom: Lea and Daria, which will also be shown at the festival.

Among the international features screened will be the very unusual American comedy Romeo and Juliet in Yiddish, directed by Eve Annenberg. It tells the story of a graduate student who is given the job of translating Shakespeare’s most famous romantic drama into Yiddish. She gets help from some young Orthodox men, and then the play is performed in Yiddish, with haredi characters from different streams as the star-crossed lovers.

Feliks Falk’s 2010 Polish film, Joanna, is about a gentile woman in Poland who takes in a Jewish child to save her during World War II. When the child is discovered, the woman has an affair with a German officer so he will not turn her in, and then she has to face charges of collaboration after the war is over.

The French drama I Was in Nuremberg is about a Nuremberg translator and a prosecutor who find they can’t let go of the trial after it ends.

The international documentary category is especially rich this year. Love Me Please tells the tragic story of Russian investigative journalist Anastasia Baburova, who was killed by a neo-Nazi in 2009. Next Year in Bombay is about two Jewish teachers who are committed to remaining with the last members of the Bene Israel community in Bombay. In a parallel story, Jubanos – The Jews of Cuba, is about the 1,500 Jews who chose to stay in Cuba under Castro. Born in a Concentration Camp features an interview with a woman in her sixties who was one of seven babies born in a concentration camp at the end of the war.

A wide variety of Israeli features and documentaries, both new and older, will be shown. Among the Israeli features will be one of the highlights of this summer’s Jerusalem Film Festival, My Australia, which won the Audience Award. It tells the story of two boys growing up in Poland in the 1960s who don’t know they are Jewish until their mother suddenly decides to move the family to Israel.

The Little Traitor, Lynn Roth’s adaptation of an Amos Oz novel about the friendship between a Jewish boy and a British soldier (played by Alfred Molina) during the last days of the British Mandate, will be screened. Avi Nesher’s 2007 look at the intense friendship of two young women studying at Bible college in Safed who begin to delve into Kabbala, The Secrets, stars French actress Fanny Ardant as a mysterious woman who befriends them.

A number of Israeli documentaries will be shown as well. Yael Katzir’s documentary Violins in Wartime will have its premiere at the festival. It tells the story of an international workshop for violinists that was held in Israel during the Second Lebanon War.

For more information and to order tickets, go to the festival’s website at
www.jewisheye.org.il.