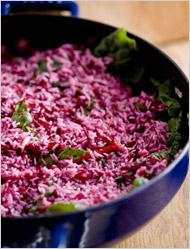 ON Rosh Hashana, many Jews eat sweet foods to symbolize a good new year. While I’m not usually superstitious, I have followed suit through the years, making sure that I peel my eggplant and serve no bitter nuts or olives.

Some years ago, though, I tasted an Iraqi dish for the Jewish New Year with bitter Swiss chard, sweet beets and beef in a sweet and sour sauce. When people ask me to recount my most memorable meals, I somehow always come back to my first taste of this dish at a simple picnic in a pine forest near Jerusalem.

I learned it from Esperanza Basson, the mother of Moshe Basson, an Israeli chef who spends a lot of time thinking about food. I have followed Mr. Basson’s career since he ran a very simple restaurant called Eucalyptus with a eucalyptus tree growing right in the center of the tiny dining room, on the outskirts of Jerusalem.

One day when I was visiting Israel, Mr. Basson invited me to go foraging in the Judean Hills for herbs found in the Bible and the Talmud. As he, his mother and I scrambled around the forest, he pointed out Jerusalem sage leaves that he stuffs in winter and the sour grapes that were pickled in antiquity and used as lemons.

Finding a wild caper, he explained that people in ancient Israel used to pickle capers and their leaves in salt water. “Tithes were brought to the priests at the Temple,” he said. “But which part should you tithe, the fruit, root or stem?”

All this was interesting, but I was getting hungry. First Mrs. Basson set out a tablecloth, plates and cutlery on a wooden picnic table in the forest. Then she took a casserole wrapped in a small blanket out of a picnic basket.

When she opened the lid, the aroma of my mother’s sweet and sour stuffed cabbage tantalized me, but I saw instead bright red beets mixed with Swiss chard and rice. She apologized at once for having changed the recipe to make it easier.

The traditional dish, one her family had eaten at Rosh Hashana for generations in Amara, a city near Basra in southern Iraq, was made by stuffing Swiss chard leaves with beets, onions, rice and sometimes meat. It was simmered in a lemon sauce with sugar to mitigate the bitterness of the leaves.

Other cooks, she explained, prepare a sweet and sour sauce that combines tart tamarind with brown sugar or a syrup made by slowly cooking dates, a technique that stretches back to the Biblical period.

Mrs. Basson’s family has always called the chard dish “mahshi.” (Mahshi means “stuffed” in Arabic.) Because once Mrs. Basson couldn’t find undamaged chard leaves to make the traditional version, she decided to make the dish in layers, calling it “fake mahshi.” To her surprise, the dish tasted just as good.

As I dipped my fork into the vegetables and the meat, I felt as though I was taking a Jewish journey into the past. Jewish cooks have always varied dishes depending on where they lived and what was available. This dish, first created in Iraq or perhaps Iran, traveled throughout the centuries on the trade routes with rabbis and merchants. It migrated as far as Lithuania, where one Rosh Hashana I ate a version with grated beets, sweet potatoes and beef.

“I would say this dish is about 1,000 years old,” said Paul Freedman, professor of medieval history at Yale. “The sweet and sour probably came from Persia and went as far west as Andalusia with the traders. The mercantile and rabbinic network of Jews created an arch of tastes and food.”

As we ate, Mrs. Basson, who had come to Israel in 1951, explained that Iraqi and other Sephardic Jews have a Rosh Hashana seder. Although the Passover seder is the best known, the word refers to a traditional order of events. In the Sephardic seder observed on Rosh Hashana, a series of blessings is said over squash, leeks, dates, pomegranates, black-eyed peas, apples, the head of a fish or a lamb and Swiss chard and beet greens.

The Hebrew word for beet greens and Swiss chard sounds very much like the verb meaning “remove, throw out, or cause to disappear.” The blessing Sephardic Jews recite at their Rosh Hashana meal before eating beet greens or chard leaves translates roughly to “May it be your will, O God and the God of our forefathers, that our adversaries be removed.”