The Jewish Palate: The Jews of France 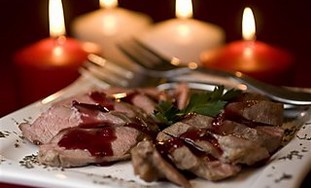 Chef Dennis Wasko explores the illustrious history of Jews in France which has been far from perfect, but has created some great food.

Jews have an illustrious history in France. Though the relationship has been far from perfect, France has been one of the few countries in Europe that has tried to treat its Jewish population with tolerance. Despite periods of rampant Anti-Semitism, Jewish life flourished and gave the world a multitude of great French thinkers and Rabbis, including Rashi and Rabenu Tam.

Jews first settled in Gaul over 2,000 years ago. The first centers of Jewish population were found in Region of Provence. The towns of Vienne, Lyons, and Marseilles became centers for Jewish life. From these centers close to the Mediterranean, Jews spread throughout France and all major cities came to have Jewish populations. By the 6th century C.E. a Jewish community thrived in Paris. At this time Anti-Semitism was unknown and Christians and Jews lived and worked together.

By the 8th century, Jews were dominating the fields of medicine, trade, agriculture, and viticulture. Jews made wine for use in the Christian Mass. France gave Jews an opportunity to make a living, and Jews gave all they could back to France.

Life continued in this way until the time of the Crusades. At first the Jews of France were not affected, but by the time of the Second Crusade, French clergymen preached against the Jews who were believed to be guilty of killing Christ and Christians. The first Blood Libel took place in 1171. Many Jews were murdered at this time or forced to convert to Christianity. The situation continued to worsen until the Jews were finally expelled from France in 1182. The Jews were recalled in 1198, only to be expelled many more times. The Talmud was also put on trial in 1240 which did not go well and it was ordered burned in 1242. Despite all of this persecution and expulsion, the Jews of France continued to flourish. Jewish scholarship in France reached its pinnacle in the Middle Ages under the tutelage of Rashi.

After the French Revolution, Jews were finally granted French citizenship. First the Sephardic Jews were granted citizenship in September of 1790 and the Ashkenazim were granted citizenship about 6 months later. Finally, Jews were seen as equal citizens once more. When Napoleon came to power, he convened a Grand Sanhedrin consisting of 45 Rabbis and 26 laymen from around France. The result was the recognition of Judaism as a protected religion in exchange for the pledge of Jewish loyalty to the State. This major step allowed Jews to participate fully in French commerce and politics. Anti-Semitism was never far away though, and by 1808 laws were passed that negatively impacted the Jewish community and attempted to assimilate them.

The remainder of the 19th century saw good and bad for the Jews, the worst event being the scandalous Dreyfus Affair. This case involved a Jewish army officer who was wrongly accused and convicted of spying for Germany. Dreyfus was sent to Devil’s Island though there was evidence vindicating him. The evidence was suppressed and the Jew was allowed to take the fall. Once the evidence surfaced and Dreyfus was exonerated, world Jewry was shocked and outraged. Theodore Herzl wrote The Jewish State: A Modern Solution to the Jewish Question in response to the Dreyfus Affair.

During the Holocaust many anti-Jewish measures were passed and the Jews of France suffered the same fate as the rest of European Jewry. It is estimated that 76,000 French Jews perished in the Nazi death camps.

After World War II and the liberation, things changed for French Jews. France became a haven for Jewish refugees and the Jewish population tripled. During the 1950’s and 1960’s many Jews from North Africa settled in France. Today France has the third largest Jewish population behind Israel and the United States. It is estimated that there are about 600,000 Jews residing in France.

The ugly face of Anti-Semitism has shown its face among the large Arab population in France. The French Government has taken stands against Israel and has placed its support behind the Palestinian Arabs. France has also had a hard time admitting its role in the Holocaust. The relationship between France and its Jews has a long way to go, but progress is being made.

To get to know the French Jews a little better I offer the following recipe for Duck Confit. Confit is traditionally made using goose. This tough, fatty bird makes an absolutely glorious confit. Duck is also traditional, and much easier to find. Today in the Southwest of France, confit is made with chicken, turkey, and just about anything that can be preserved.

The Larousse Gastronomique defines confit as “a piece of goose, duck, or turkey cooked in its own fat and stored in a pot, covered in the same fat to preserve it.”
It is one of the oldest forms of food preservation that was developed in Southwest France to keep meat for the long, lean months after the fall harvest/slaughter.

Today, with modern refrigeration, you would think that making confit would be obsolete. That would be true except for one very important fact; confit is incredible. It is hard to describe the transformation. Let’s just say that fatty, tough meat is transformed into a rich, concentrated, succulent taste sensation. The confit process gently removes water from the meat and concentrates its flavors. The process also tenderizes the meat to an almost melting consistency. There is nothing else like it!

Traditionally, only the leg, thigh, and wings of poultry are used for confit as these are the tougher cuts. The breast does not take as well to the confit process as it tends to dry out.
The method for making confit is quite simple. If you have not made your own confit, you should try it at least once to experience the magic of this process.

Here is a simple method for making your own confit of duck. Don’t be scared, just try it.

-3 5-pound ducks, cut into 6 pieces (your butcher can do this for you if you do not know how)
-1/4 cup kosher or pickling salt
-1 bunch fresh thyme
-3 bay leaves
-1 tablespoon black peppercorns

-Remove the leg/thigh portion, wings, breasts, and any giblets. Trim all of the fat and skin from the carcass.

-Pack up the breasts and giblets to use another day. Save the trimmed carcass to make duck stock. Nothing is wasted in French Cuisine.

-Place all of the trimmed fat and skin into a large pot. Add cold water to cover and bring to a boil. We are rendering the fat and the water will help in this process. After all of the water evaporates, you will be left with pure fat. Lower the heat to medium and continue to cook until the skin pieces begin to turn brown. Let them get golden and crispy. Turn off heat, allow to cool for 20 minutes, and drain off fat and reserve. Be careful, the fat is still quite hot. Put fat into a bowl and refrigerate. Save the duck cracklings (crispy skin), they are great in salads or with eggs. Nothing is wasted in French Cuisine.

-Place the leg/thigh pieces and wings into a non-reactive container. Sprinkle with the salt, and add the seasonings. Pat the mixture generously on to the duck legs and thighs. Refrigerate overnight uncovered.

-The next day, remove duck pieces and fat from the refrigerator. Place fat into a large pot being careful not to scrape in any of the liquid or sediment that may be at the bottom of the bowl. Place fat over low heat to melt.

-Rinse duck pieces under running water to remove the salt and seasonings. Pat very dry with paper towels. Place duck into melted fat and increase heat until fat begins to barely simmer. Maintain the fat at this gentle simmer-you can also use your slow cooker for this. Cook the duck for 2 to 3 hours depending on how large the pieces are and how tough the duck.

-To check if the duck is ready, poke with a thin knife or a skewer. If the knife goes in easily and the meat seems meltingly tender, the duck is ready. Be careful not to overcook or the duck will fall apart into the fat.

-Gently transfer the duck pieces to a storage container and strain the fat over the pieces. The confit can be stored, covered in its fat for up to 6 months. The confit may now be used in your recipes, or enjoyed by itself. Confit begins to develop its full flavor character after about 1 month of storage. The fat can be scraped off and used again to confit more duck.