The New Roads Of Mandalay

It is a bold thesis that places a backwater like Burma at the geopolitical heart of Asia. For nearly 50 years, the country has been isolated from the rest of the world by an inward-looking military regime and sanctions imposed by Western governments. Burma is poor, undeveloped and neglected by international trade and aid. Yet in recent years China and India have formulated daring economic schemes that include the country. Thant Myint-U has been tracking these plans and believes that they promise “nothing less than a new map of Asia.”

China, situated along Burma’s northeastern border, is a voracious country, and Burma provides it with a ready source of raw materials, such as timber and its treasured jade, as well as much-needed oil. Massive hydroelectric dams are being planned in northern Burma that will sell most of the energy they generate to China. Construction has begun on a pipeline to transport natural gas extracted offshore in Burma to China.

Burma also offers China a direct path to the Indian Ocean. Just as the Suez Canal once sliced a route from the Mediterranean to the Red Sea, dramatically shortening the journey between East and West, so a land route across Burma could provide China with an alternative to shipping cargo through the Straits of Malacca. To exploit this access, the Chinese recently began building a deep-sea port on the Burmese island of Ramree. It will be linked to China via high-speed rail and a highway more than 1,200 miles long.

Meanwhile, to the northwest of Burma, lies India. The Indian states that border Burma are among the poorest in the country, crippled for decades by insurgencies. Connected to India only by the narrow Siliguri Corridor, the area is landlocked and utterly remote. Renewed ties to Burma offer one of the best chances for economic growth in the region—as well as better access, for the Indian economy as a whole, to the markets of the Far East. 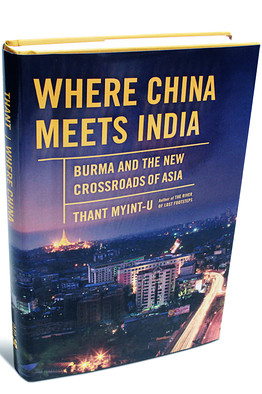 In 2008, India signed an agreement to rebuild the port at Akyab on Burma’s western shoreline and link it to northeast India by turning the Kaladan River into an inland waterway and linking it with India’s highway system. Though the $400 million “Kaladan Multi-Modal Transit Transport Project” is progressing slowly, another highway is under way that will link Calcutta in India with Kunming in China via Burma.

Historically, the hinterlands between China and India have been an uncharted territory of dense, malarial jungles and mountainous terrain. Ancient Chinese explorers encountered tigers, giant snakes and ferocious barbarians. Much later, in the 19th century, the British colonial powers in India dreamed of a trade route through Burma to China but found it logistically impossible. These age-old visions are today becoming reality as roads, railways and pipelines begin to crisscross the region and open up hitherto inaccessible and seldom-exposed corners of the Asian map.

This is the story that Thant Myint-U tells in “Where China Meets India,” wondering what will happen as India and China (antagonists in the postwar era) nudge closer together by way of Burma. “Some,” he writes, “have predicted the making of a new Silk Road, like the one in ancient and medieval times that connected China to Central Asia and Europe. Others warn of a new Great Game, and rising conflict between the world’s largest rising powers.”

An American-born Burmese scholar, Thant Myint-U has written extensively on Burma and is well-placed to explore the possibilities. His book is divided into three sections, covering Burma, China and India respectively. He blends ancient and modern history with current-day political analysis and some travel writing. Though he visited some remote regions, the travelogue is stilted and dry compared with the fluidity and charm of the history sections.

He uncovers enticing characters, such as the avaricious ruler of the Chinese kingdom of Shu who, in the fourth century B.C., lost his kingdom through a ruse involving statues of cows and blocks of gold. Conned into thinking that the cows excreted solid gold, he allowed the construction of a new road to import the miraculous beasts, thereby literally paving the way for an invading army. Then there is Ida, the wavy-haired daughter of an Irish seaman and a Chinese dancing girl who in the 1940s became the concubine of a Shan chieftain. Dissatisfied with her lowly origins, the chieftain upgraded her parents to an English colonel and a Mongolian princess and only ever learned only two words of English: “Ida darling.”

The book touches on forgotten peoples. In the hills south of Imphal in northeast India live the Bnei Menashe, a Lost Tribe of Israel currently awaiting resettlement in the Jewish homeland. At Dali, in Yunnan, there is a dwindling Muslim population—survivors of a mid-19th-century massacre that exterminated up to 7,000 Muslims and the last remnants of a wave of Islamic influence that rode in with the Mongol conquests of the 13th century. Such stories conjure up long-gone migratory routes and bring the little-known region to life.

Beyond its central narrative, “Where China Meets India” can be read as a treatise against the sanctions imposed on Burma by Western governments. These have pushed Burma ever closer to China, argues Thant Myint-U: “As Western rhetoric in favor of an immediate democratic transition became more shrill, China’s steady declarations of friendship and pledges of ‘non-interference in the internal affairs of Myanmar’ [as the Burmese dictatorship renamed the country in 1989] rose in value.”

His argument against sanctions is not laid out on moral grounds (there is little about the Burmese regime’s extensive human-rights abuses within these pages) but is instead part of a pragmatic look at future prospects. On the unfolding new map of Asia, Thant Myint-U notes, Burma will be the only country without access to Western markets and Western learning. It’s a potentially destabilizing imbalance of influences that should lead Western policy makers to review the effectiveness of sanctions and to put “Where China Meets India” on their required reading lists.

Ms. Larkin is the author of “No Bad News for the King: The True Story of Cyclone Nargis and its Aftermath in Burma.”