The Trouble with Textbooks: Distorting History and Religion 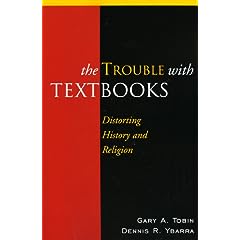 Textbooks around the world are blatantly used as tools for propaganda. It is shocking to discover that history and geography textbooks widely used in America’s elementary and secondary classrooms contain some of the very same inaccuracies about Christianity, Judaism, and the Middle East as those in Iran.

The 500 problematic passages about Judaism, Christianity, Islam and the Middle East uncovered in the analysis of the 28 most widely used textbooks in public schools should evoke considerable concern on the part of Americans. History and religion are being distorted in schools in every one of the 50 states.

Did you know that “there is no record of any important [early] Jewish contribution to the sciences?” (World Civilizations, Thomson Wadsworth). Or that “Christianity was started by a young Palestinian named Jesus?” (The World, Scott Foresman/Pearson).

Textbooks include negative stereotypes of Jews, Judaism, and Israel. For example, textbooks tend to discredit the ties between Jews and the land of Israel. Israel is blamed for starting wars in the region and being colonialist. Jews are charged with deicide in the killing of Jesus. All in all, there are repeated misrepresentations that cross the line into bigotry.

The textbook publishing process suffers from systemic ills. Developing a textbook and getting it adopted in the major states of Texas and California is so expensive that only those competitors with the deepest pockets stand a chance to succeed. Only three mega-publishers (down from nine in less than twenty years) control the K-12 textbook market, meaning that more and more titles are concentrated in fewer hands. Errors in one book now stand a greater chance of replicating themselves across other books because they may originate from the same source.

Special interest groups make their influence felt in textbook content through the state adoption process and local district textbook selection. Publishers’ reluctance to offend any group results in the dumbing down of textbook lessons to the lowest common denominator.