When Jewish Scholars Fled to the South 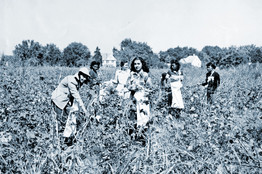 It’s a simple bracelet — a string of white plastic beads. Every time Mary Etta Madison puts it on, she recalls her days as a young student at a black college in Alabama, and the German-Jewish professor who gave it to her as a gift 57 years ago.

Mrs. Madison, 78, a retired school teacher, says the Talladega College professor, Lore Rasmussen, gave her the confidence to pursue her own teaching career.

“I felt very close to her through the years,” Mrs. Madison says.

Friendships like these had a cost in the segregated South. One night in 1942, Prof. Rasmussen and her husband were arrested for dining with an African-American in a blacks-only cafe.

Two jail receipts for $28 each from that night, along with Mrs. Madison’s bracelet and dozens of other artifacts, photographs, documents, and paintings are part of an exhibit set to open next week at the Museum of Jewish Heritage — A Living Memorial to the Holocaust in New York’s Battery Park City. The exhibit illuminates a period during and after World War II when scores of German-Jewish refugees from Nazi Germany found havens teaching in small black colleges throughout the South.

The Jewish scholars who had fled the Nazis and the young black students facing the hardships of the segregated South forged bonds that in many cases lasted long after the students had graduated and the professors had left the South for other posts.

“Even now, I can read almost any German scientific literature,” says Dr. Joycelyn Elders, who served as surgeon general of the U.S. under President Bill Clinton and attended Philander Smith College in Little Rock, Ark. She says she learned German from one of her professors, Georg Iggers, a refugee from Hamburg.

Several thousand German-Jewish scholars and academics fled Nazi Germany and Austria in the 1930s and 1940s, following decrees that banished Jews from teaching and forced them out of universities. Many found their way to the U.S. Those with distinguished backgrounds — most notably Albert Einstein — were hired by research institutes and prestigious schools such as Harvard and the New School.

But younger or less-established German-Jewish academics struggled to find work. When black colleges offered them positions, they set about making homes for themselves in these schools, many of which were founded after the Civil War by Christian orders to educate freed slaves.

The South was still under the grip of so-called Jim Crow laws, which mandated separation of blacks and whites. But these universities “were a haven of integration,” says Bonnie Gurewitsch, the exhibit’s curator. As private institutions that were often linked to churches and dependent on private rather than state funding, they were often shielded from these laws, she says.

The exhibit, called “Beyond Swastika and Jim Crow: Jewish Refugee Scholars at Black Colleges,” draws on a book of the same name published in 1993 by a German-Jewish refugee, Gabrielle Edgcomb, as well as on research by the museum. A documentary based on the book aired on PBS in 2000.

The exhibit includes a couple valuable artworks, such as “The Gleaners,” a large canvas painted in 1943 by John Biggers, showing a group of African-American men and women foraging for coal on a railroad track. Mr. Biggers, a black painter, had an influential German-Jewish mentor, the art educator Viktor Lowenfeld, with whom he studied in the early 1940s at the Hampton Institute, a black college in Virginia.

Most of the items on display are commonplace — a sweater from a black fraternity, a menorah from pre-war Germany, a Christian Bible from the South. Among the exhibits is a photograph of Prof. Rasmussen, the Talladega professor who befriended Mrs. Madison, standing in a cotton field with some of her students.

Prof. Rasmussen fled the Nazis in 1937 when she was 17, forced to abandon her studies because she was Jewish. She attended college and graduate school, in the U.S., at the University of Illinois in Champaign-Urbana. She taught early-childhood education at Talladega from 1947 to 1952.

“There is no question that my mother’s early experience in Nazi Germany set the mold for her work and her attitudes and her feelings once she came to the United States — she immediately felt an allegiance with the black students and understood the difficulties they were having,” says David Rasmussen. His mother passed away in January at 88.

Florence Enwright Miller, a 1950 graduate of Talladega, remembers the trip to the cotton field that she took with Prof. Rasmussen’s class, captured in the photograph in the exhibit. “We were probably going to be teaching children who were very poor and she wanted us to know how it felt,” recalls Mrs. Miller, who appears in the photo.

Mrs. Miller, 78, went on to a teaching career that lasted 34 years, and focused on disadvantaged children who lived in rural areas and in Charleston, S.C.

Evelyn Young White, 79, who was also on the expedition to pick cotton, says Prof. Rasmussen took her classes on several unusual trips. She “was a little ahead of her time, I think,” she says.

Some of the German-Jewish professors became active in the emerging civil-rights movement during the 1950s. Georg Iggers was only 11 when he left his native Hamburg, but he was haunted by boyhood experiences of being banned from swimming or going to the movies because he was Jewish. Those memories stayed with him when he resettled in America. He and his wife, also a refugee, were offered teaching posts in 1950 at Philander Smith College in Little Rock.

“I didn’t look for a black college, but when I got a job I took it,” says Prof. Iggers, now 82 and living in Buffalo, N.Y. He joined the NAACP and threw himself into the desegregation battles of the Little Rock schools.

In a letter published in the Arkansas Gazette in November 1950, he complained that public libraries for African-Americans were inadequate, writing that the only “practical and democratic solution is that of opening the doors of the main library to all, irregardless of race.”

A centerpiece of the exhibit chronicles the extraordinarily close bond forged by a former German-Jewish judge and professor, Ernst Borinski, with his students at Tougaloo College, a historic black college in Jackson, Miss. Dr. Borinski had worked as a magistrate in Germany, but fled in 1938. He joined Tougaloo as a sociology professor in 1947, and remained there until his death in 1983. One of his students was Donald Cunnigen, now a sociology professor at the University of Rhode Island. He recalls how Dr. Borinski once penned 27 letters of recommendation to help him obtain a place in a prestigious graduate program.

“He taught us how not to be victims,” says Joyce Ladner, a sociologist and author who went on to become acting president of Howard University.

“He didn’t speak about Nazi Germany or about being a Jew in Mississippi — but he served us pickled herring and gefilte fish and I didn’t know where in the world he got it,” she says. At the college, she says, blacks and whites could co-exist, but “when you left the gate of Tougaloo, it was that same old racist Mississippi.”

In an oral history taken by the Mississippi Department of Archives and History, Prof. Borinski recalled telling students: “I am not from here, I am not even from America, but when I see the kinds of laws you have here I assure you it cannot last very long….I don’t want you to accept any one of them.”