‘Osnat and Her Dove: The True Story of the World’s First Female Rabbi’ written by Sigal Samuel and illustrated by Vali Mintzi (Levine Querido)

As she grew up, Sigal Samuel secretly dreamed of becoming a rabbi. Instead, she became a journalist and author.

“My family is Iraqi on my father’s side, my mother’s family is Moroccan, and  I grew up in Montreal’s Orthodox Jewish community. I just couldn’t imagine becoming a rabbi as an option,” Samuel said.

“The only women rabbis I saw were Ashkenazi and from the Reform and Conservative movements. I didn’t see anyone who looked like me,” she said.

So, when Samuel recently discovered that the woman widely considered to be the first female rabbi in history was from the Middle East, she was amazed and thrilled. Her name was Osnat (alternately Asnat or Asenath) Barazani, and she lived in Mosul, Iraq, in the late 16th and early 17th centuries. 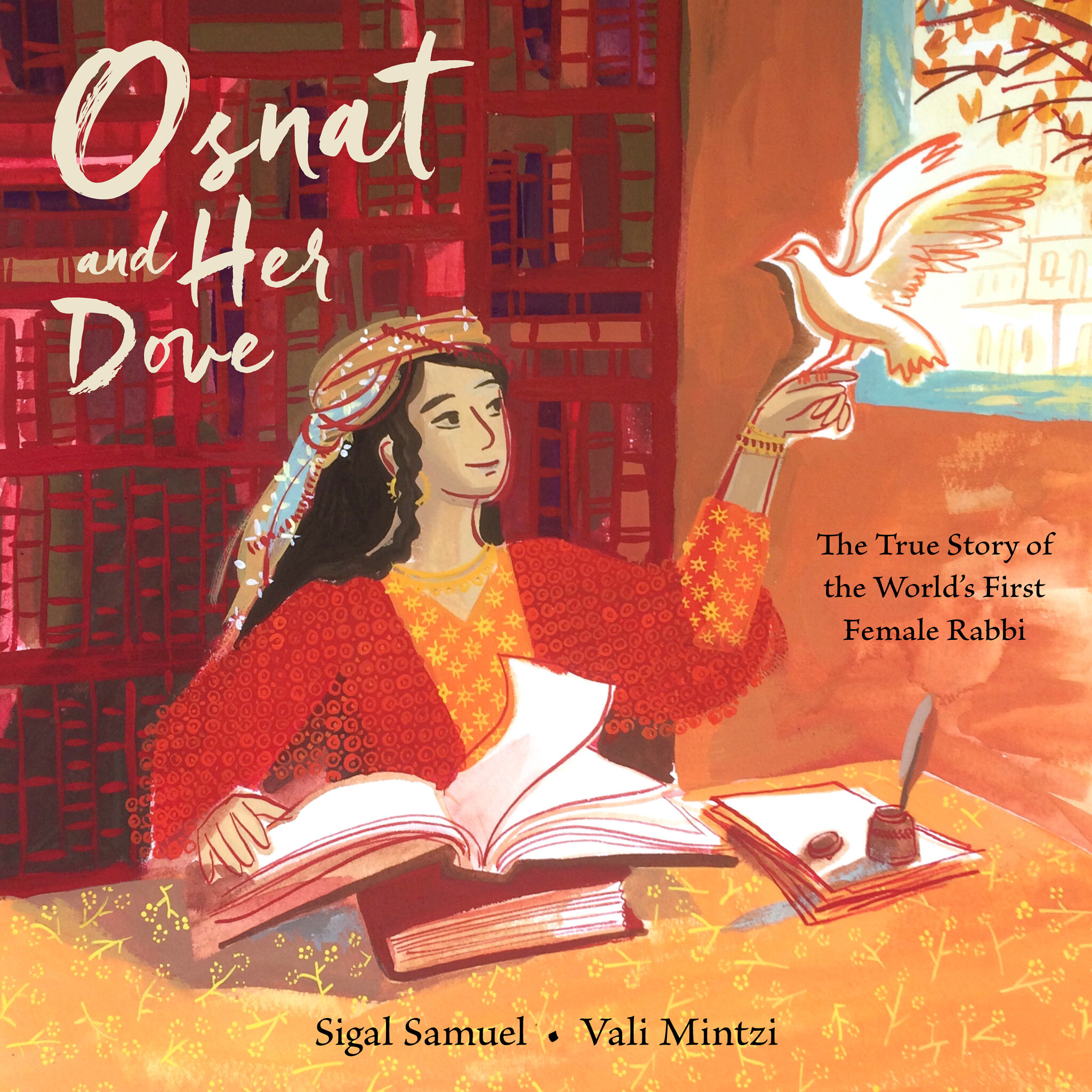 ‘Osnat and Her Dove: The True Story of the World’s First Female Rabbi’ written by Sigal Samuel and illustrated by Vali Mintzi (Levine Querido)

The daughter of Rabbi Shmuel ben Netanel Ha-Levi of Kurdistan, who had no sons, Osnat was trained to be a learned scholar of Jewish sacred texts and mysticism. She married Rabbi Jacob Mizrahi, one of the best students at her father’s yeshiva, and helped him run the school after her father died. In fact, Osnat did most of the teaching while her husband focused on his own studies.

After Jacob died, Osnat made a smooth transition to becoming the head of the yeshiva, splitting her time between teaching and making desperate attempts at fundraising to keep the institution afloat. In time, Osnat’s son Samuel became an outstanding scholar and was sent by his mother to Baghdad to run a yeshiva there. Osnat herself is remembered within the Jewish and general Kurdish communities as a great leader, teacher and mystical miracle worker.

Samuel, staff writer at Vox and former religion editor at The Atlantic, is intent on sharing Osnat Barazani’s story with the next generation. She does this with a new children’s picture book titled, “Osnat and Her Dove,” which will be published on February 2 by Levine Querido, the new publishing company founded by Arthur A. Levine, who brought to light such blockbusters as the “Harry Potter” series during his 23-year tenure as the president and publisher of Arthur A. Levine Books, an imprint of Scholastic. 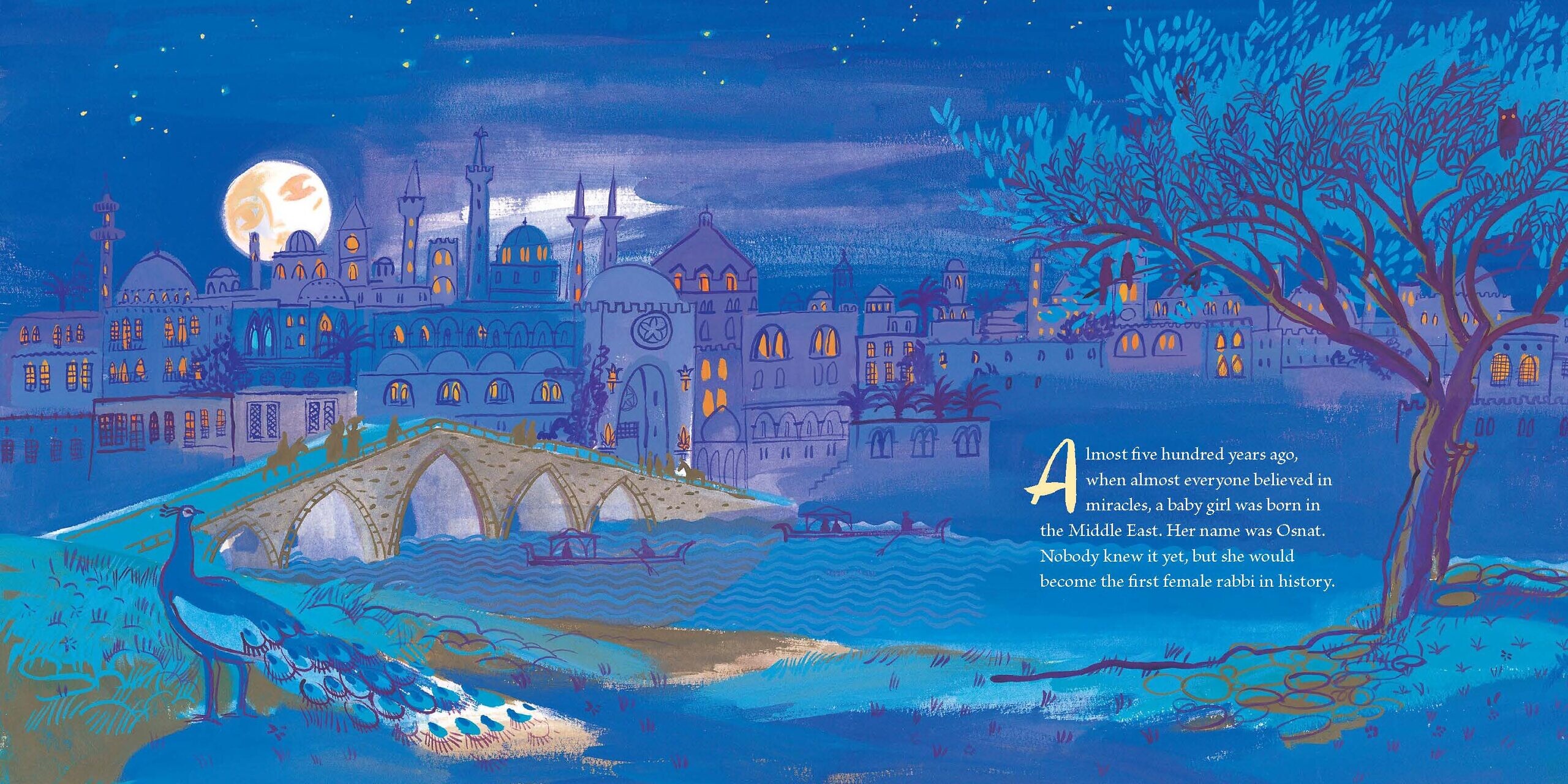 “I wanted to correct the myth that there wasn’t and can’t be a woman rabbi in the Orthodox or Mizrachi worlds. This is very personal for me,” Samuel told The Times of Israel in a video interview from her home in Washington.

Samuel said she identified strongly with Osnat not only because of their shared Iraqi backgrounds. Like Osnat, Samuel also grew up learning Talmud and Kabbalah with her father, who taught Jewish mysticism at Concordia University.

“I would come home from my Jewish day school, where I would learn the usual Jewish subjects, and then sit and study the Zohar with my father, just as Osnat did,” Samuel said. 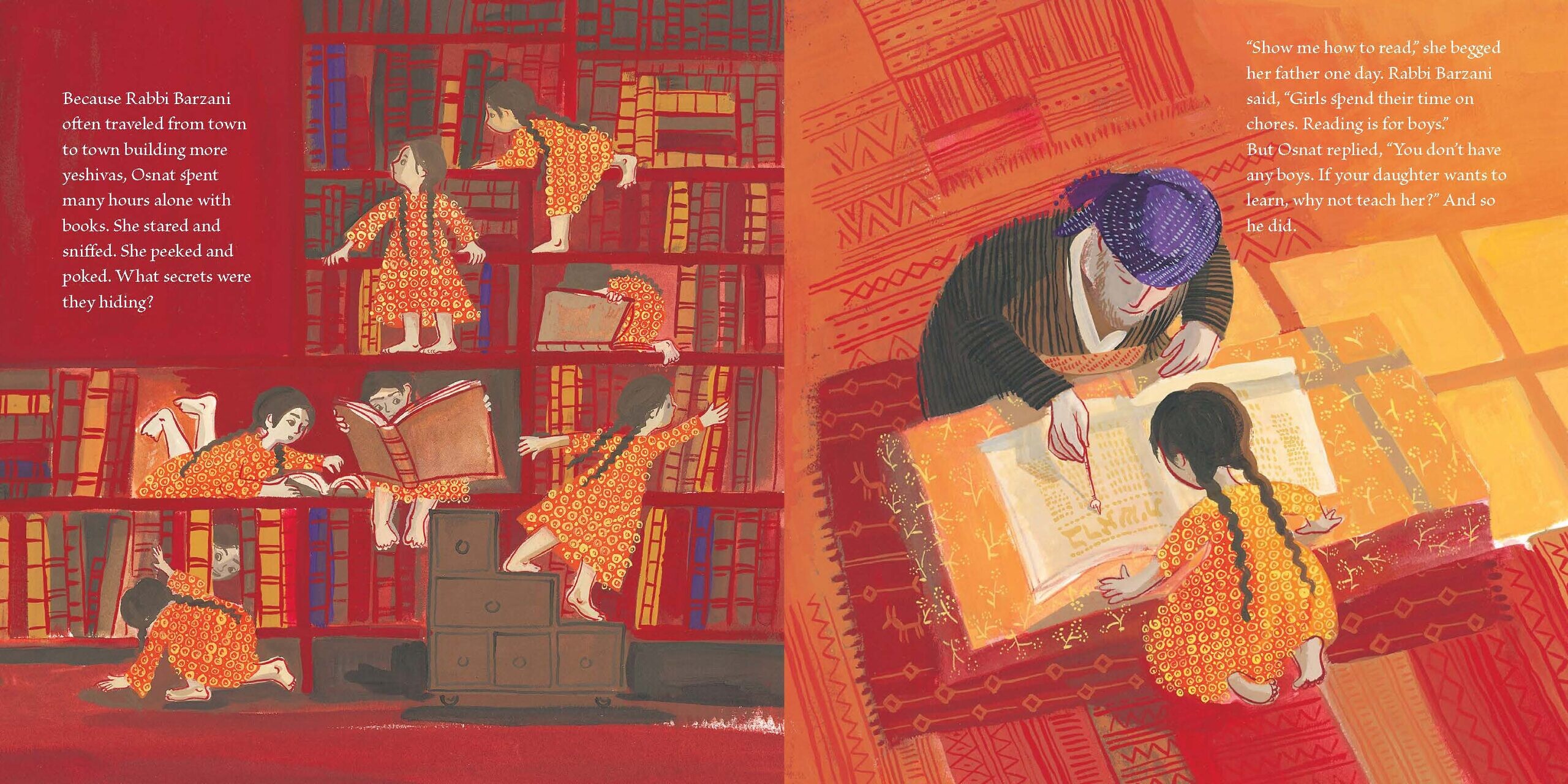 Unusually, Osnat was never made to do typical women’s work, and her father insisted that her husband Jacob promise never to demand she do household chores.

“I grew up on the laps of scholars, anchored to my father of blessed memory… I was never taught any work but sacred study,” Osnat wrote in one of her surviving letters.

Samuel relied on the limited examples of Osnat’s own writing (letters and poems) that remain, as well as Kurdish legends about her, to create the narrative for her children’s book. The author had hoped to visit Jerusalem to view these preserved documents first-hand at the National Library of Israel, but the COVID-19 pandemic has postponed those plans. 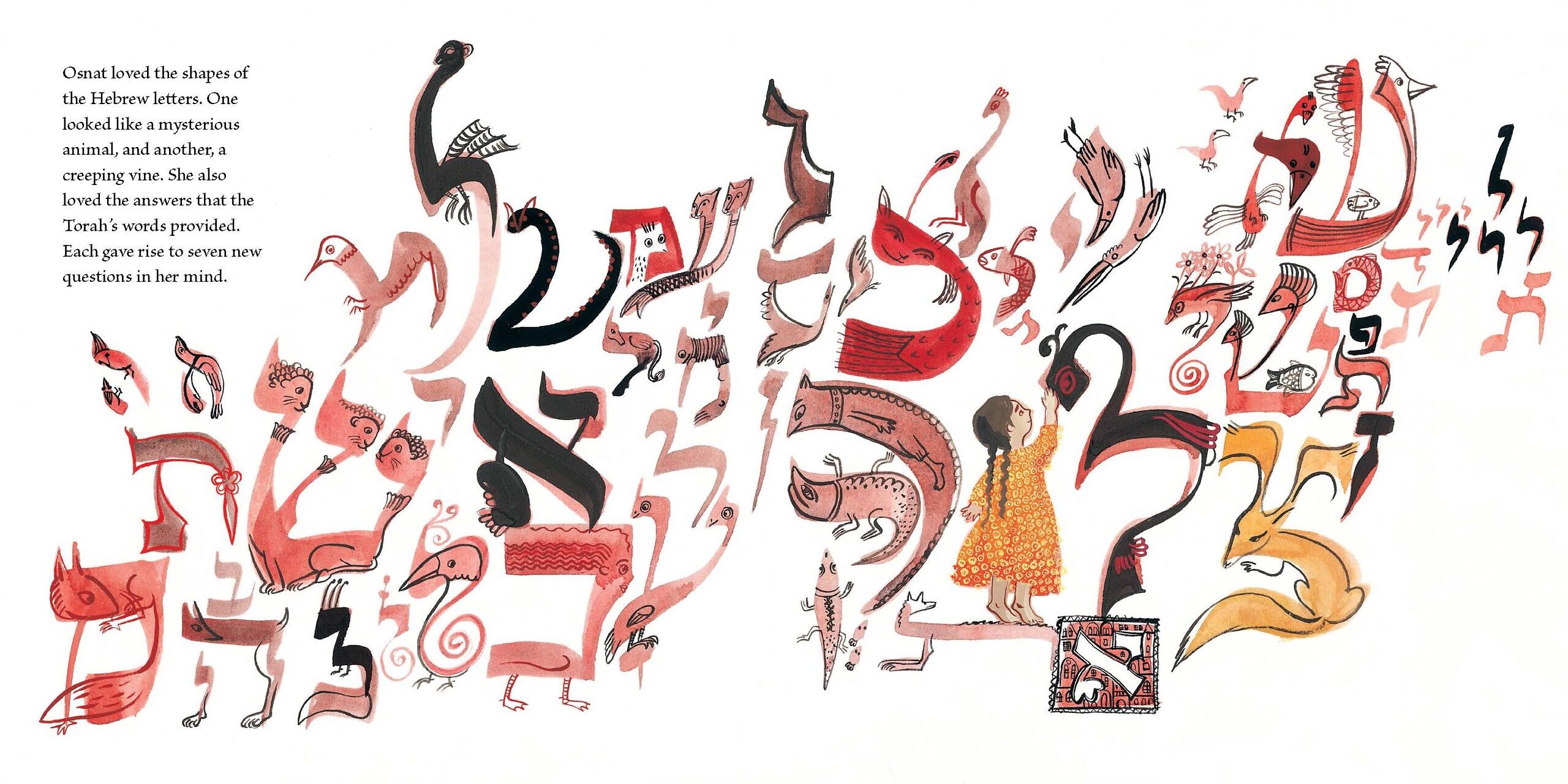 Fortunately, she was able to rely on secondary sources written by scholars familiar with Osnat’s writings. These same scholars also examined additional surviving historical documents in attempts to learn more about early Kurdish Jewish communities. Osnat is sometimes mentioned, leaving the scholars to try to understand exactly what role she played.

Crucially, in a 2000 article published by Yad Izhak Ben Zvi (Hebrew only), husband and wife scholars Prof. Renee Levine Melammed and Dr. Uri Melammed contradicted earlier assumptions that Osnat was not as learned as men, and therefore incapable of producing letters in accomplished, scholarly Hebrew that referenced Jewish sources.

The article authors point out the biblical and Talmudic references in her writings, and that contemporary documents make not a single mention of opposition to Osnat taking over as yeshiva head after her husband’s demise. Additionally, she is referred to in reverential terms by community leaders and great scholars, such Rabbi Pinchas Hariri, who addressed her in a letter as “My mother, my rabbi.”

“I found the juxtaposition of those words just amazing,” said Samuel, who used them in “Osnat and Her Dove.” 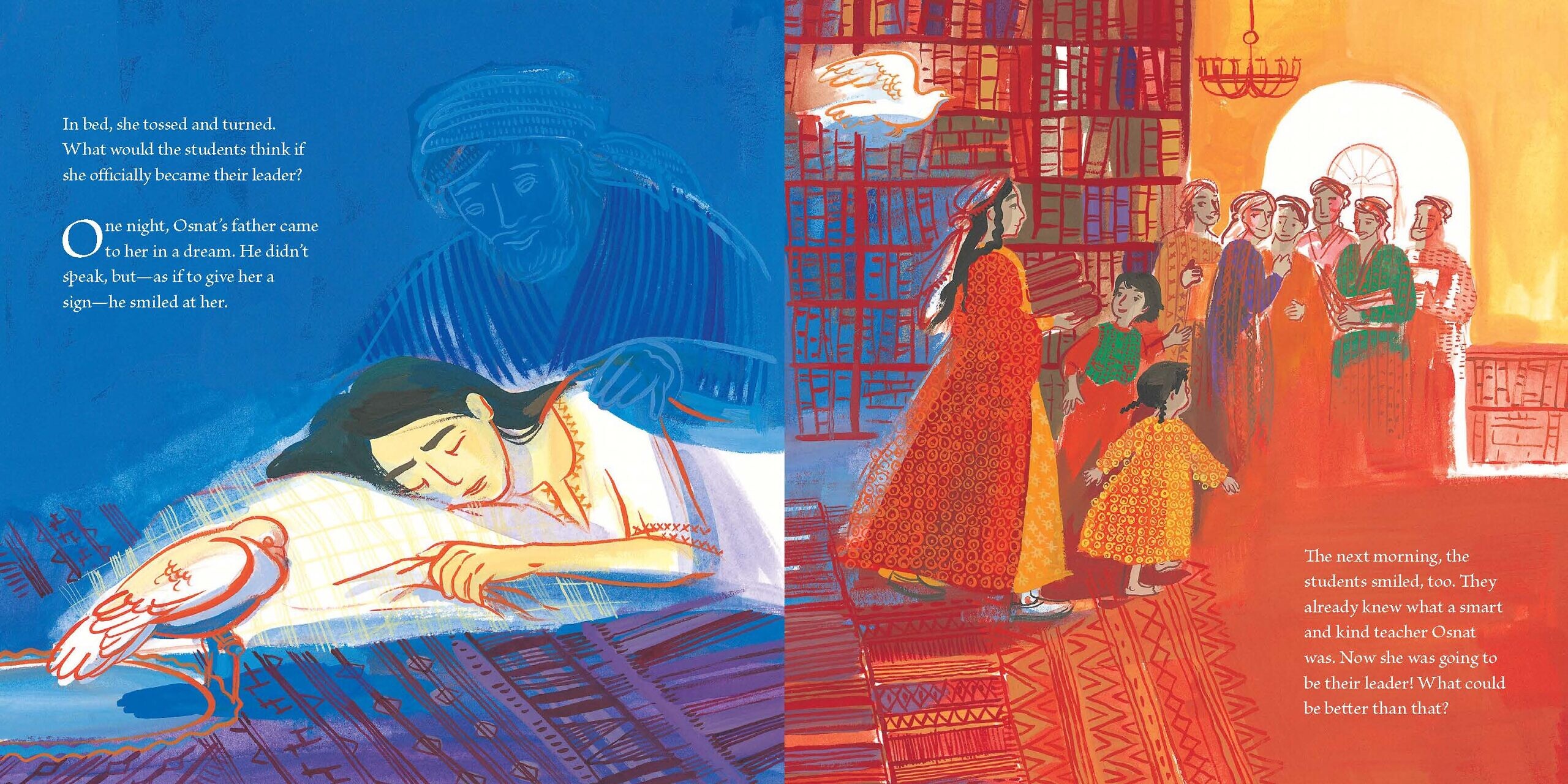 Having written an award-winning novel about mysticism, “The Mystics of Mile End,” Samuel was especially fascinated with the legends about the female rabbi’s supernatural abilities. Examples of Osnat’s miracle-working appear in “Osnat and Her Dove.”

“Some people I showed the manuscript to questioned my decision to include this in a biography, which is something one might argue deals only with facts,” Samuel explained.

“But I really wanted to include Osnat’s performing mystical feats and miracles. I like magical realism, and I’ll leave it up to the reader how to interpret it,” she explained.

Samuel made sure to set the stage and provide context with the book’s opening sentences: “Almost five hundred years ago, when almost everyone believed in miracles, a baby girl was born in the Middle East. Her name was Osnat. Nobody knew it yet, but she would become the first female rabbi in history.” 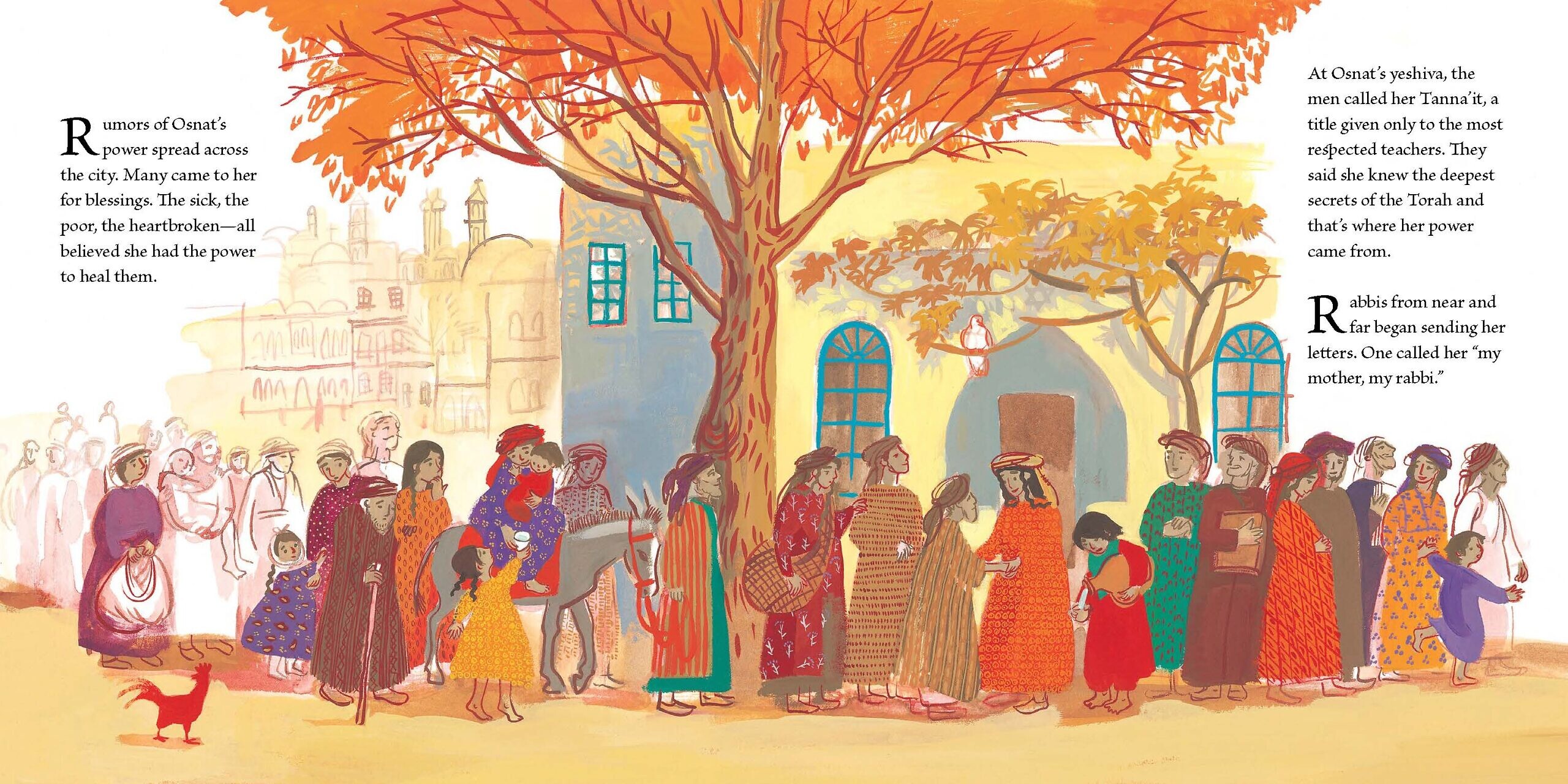 However, the author drew the line at legends that although impressive, were not suitable for young audiences. For instance, there is one whereby Osnat froze an intruder in his tracks before he could rape her by merely calling out holy names.

The striking and vibrant illustrations in “Osnat and Her Dove” pull young and old readers alike into Osnat’s world.

“Arthur A. Levine is himself a Sephardic Jew, and I trusted him to find an illustrator who would portray Osnat accurately. One thing I really did not want was for Osnat to be portrayed as white,” Samuel said.

The publisher chose Vali Mintzi, a Romanian-born Israeli illustrator of children’s books, graphic designer, and puppetry designer for the project. Mintzi had previously illustrated a book about an Iranian child, “The Girl with a Brave Heart” by Rita Jahanfouz. Upon seeing the style, sensibility and palette used by Mintzi in that book, Samuel was confident that the illustrator was a good match for Osnat’s tale.

Writing about Osnat has whet Samuel’s appetite for writing more children’s picture books. She’s mastered being extremely economical with words in a genre in which each word pulls a lot of weight. She’s also learned that kids are very discerning readers.

“They can tell if the writer has put their soul into it or not,” Samuel said.