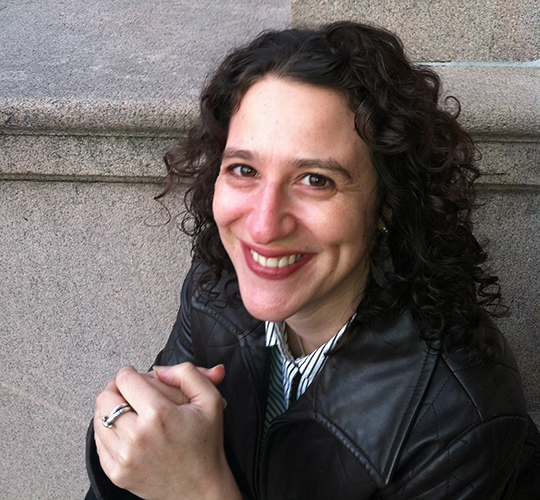 Looking at political theory through a global lens comes naturally to Jane Anna Gordon. As the daughter of South African Jews, she became interested in the issues surrounding slavery and inequality after spending her childhood traveling from Chicago to visit family in apartheid South Africa.

“I remember being really struck by how similar apartheid South Africa and the south side of Chicago were, although they were described in incredibly different terms,” says Gordon, who next year will join the Department of Political Science and the Institute for African American Studies in the College of Liberal Arts and Sciences. “That posed a question that would never go away: How people live very radical inequalities as if they are normal, and what it requires to conceptualize the world in which they live in the face of all the constant contradictions that are constantly cropping up.”

Seeking answers to such questions led her to become a scholar whose writings as a political theorist challenge conventional thinking.

“A lot of the literature that you are introduced to when you study sociology or political science never quite gets to a lot of the things that nag at people and make things difficult,” she says. “It’s almost as if there is a thin curtain covering up a rich and complicated world behind, and you’re approaching the curtain but never pulling it open. In a lot of my work, I’ve been trying to pull the curtain open using whatever resources I can.”

Gordon specializes in social and political theory, contemporary slavery, and black political thought, and comes to Storrs from Temple University, where she was co-director of both the Institute for the Study of Race and Social Thought and the Center for Afro-Jewish Studies.

Her most recent paper, “Theorizing Contemporary Practices of Enslavement,” earlier this year won the 2012 Foundations of Political Theory Best Paper Prize from the American Political Science Association, and her latest book, Creolizing Political Theory: Reading Rousseau through Fanon, will be published next year by Fordham University Press.

One of the most interesting ways to think about difference is through the model of creolization, which emerged as a way to make sense of what transpired in the plantation societies of the Caribbean.
Gordon’s focus on creolization – how distinct cultures emerged in the “New World” as people from separate parts of the “Old World” converged – examines how to view differences in political theory and culture in order to develop creative solutions to new issues resulting from an increasingly global world.

“One of the most interesting ways to think about difference is through the model of creolization, which emerged as a way to make sense of what transpired in the plantation societies of the Caribbean,” she says. “People who came from different parts of the world, who shared no previous genealogy, suddenly found themselves in the same place. While they were supposed to occupy it in ways that were radically separate and unequal, they in fact led interdependent, mutually interpenetrating lives. New products emerged, as what had been foreign became a shared home. In them you saw a unique blending of once discrete older forms of life combined into something both familiar and new.”

Comparative political theory, Gordon says, has helped to create “professional faith” in the push to study the world of political thought, rather than just one part of it.

Gordon says the movement toward “critical alternatives” in political theory emerged from the pioneering work of Fred R. Dallmayr, the Notre Dame political science and philosophy professor who wanted to make political theory “more worldly than provincial” and called for political theorists “to try to be at the forefront of pressing global debates instead of only the library.”

“The aim in political theory is not simply to honor how it is that people have devised ideas about the good life or the best way to govern, but to develop creative, syncretic solutions to new problems,” she says. “The orienting mode that has governed political theory is really misleading in its account of how exciting ideas emerge. They rarely come out of a focus on liberally tolerating differences, but instead from forging a future we can all occupy that will draw on, but also break from, previous ways of thinking and acting.”

Gordon has been involved with the Caribbean Philosophy Association (CPA), which focuses on encouraging dialogue about ideas within the region, since its founding in 2002. She was one of the organizers of the association’s 2012 annual conference in Trinidad last July at the University of the West Indies. Scholars from the United States, Asia, Africa, and the Caribbean participated in the three-day meeting.