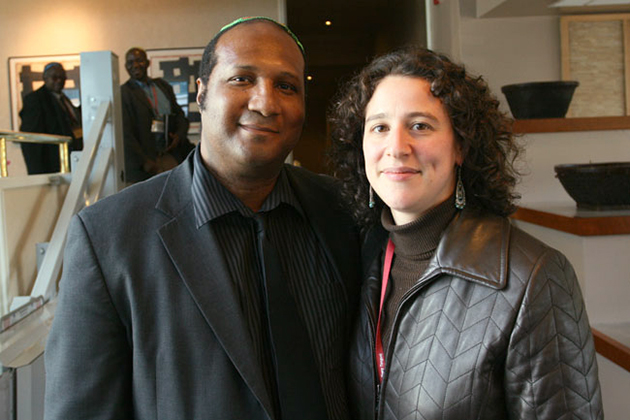 Talk with Lewis Gordon and Jane Anna Gordon and you will find quickly that relationships matter. Not just between two scholars who pursue different disciplines and find common ground for collaboration, but in the world at large.

The two scholars, who are married, will arrive in Storrs next summer from Temple University where Lewis, a renowned philosophy professor, and Jane, a political science theorist who is a prolific writer, independently teach and conduct research but also have collaborated as the leaders of the Institute for the Study of Race and Social Thought and the Center for Afro-Jewish Studies.

They each raise issues across multiple disciplines in seeking to find answers on what they consider fundamental questions about race, society, and how human beings relate to each other. Lewis Gordon, whose mother is Jamaican of Sephardic and Mizrahi descent, focuses much of his writing on race and racism, Africana and black existentialism and postcolonial phenomenology. Jane Gordon, whose family is Jewish and who grew up visiting family living in apartheid South Africa , specializes in social and political theory, contemporary slavery, and black political thought.

“One of the things that connects all my work is that everything I do and write about comes down to the question of what it means to be a human being,” says Lewis Gordon, who earned his doctoral degree at Yale. “Because of that, although my Ph.D. is in philosophy, that’s a question that really deals with the human condition, so my work has had an impact across what could be called the human sciences.”

His work as the founder of the Second Chance Program at Lehman High School in the Bronx (N.Y.), which focused on teaching children thought to be too troubled and difficult to educate, led him to pursue his Ph.D. to further examine human potential. The students at Lehman – thought to be so difficult to teach – succeeded in large part because of the confidence instilled in them through the program.

The consideration of such large philosophical questions might result in moving far from the real world implementation of any answers, but Lewis Gordon says the core of his work is firmly grounded.

“Everything I write about takes reality seriously,” he says. “One of the things that has happened in philosophy particularly and other areas of scholarship, is there’s almost hostility to the idea of reality. I actually see reality as an emancipatory idea. It tells us that if we go beyond ourselves, we find ourselves in relations with others, and that relationship with others merely raises the question of what it means constantly to understand we should get out of the way of our limitations, and sadly often the limitations turn out to be ourselves.”

Jane Gordon says that as the daughter of South African Jews, she became interested in the issues surrounding slavery and inequality after spending her childhood traveling from Chicago to visit family in apartheid South Africa.

“I remember being really struck by how similar apartheid South Africa and the south side of Chicago were, although they were described in incredibly different terms,” she says. “That posed a question that would never go away: How people live really very radical inequalities as if they are normal, and what it requires to conceptualize the world in which they live in the face of all the constant contradictions that are constantly cropping up.”

She says trying to understand the path to finding answers to such questions led her to becoming a scholar.

“A lot of the literature that you are introduced to when you study sociology or political science never quite gets to a lot of the things that nag at people and make things difficult,” she says. “It’s almost as if there is a thin curtain covering up a rich and complicated world behind, and you’re approaching the curtain but never pulling it open. In a lot of my work, I’ve been trying to pull the curtain open using whatever resources I can.”

One of the resources she has used is film, teaching a course in political theory and film to help students to better understand politics and political activity.

“I was shocked to find out that my students had not seen ‘The Godfather.’ In many ways in the readings in the class, especially Machiavelli, there is no better illustration of it than ‘The Godfather II,’” she says. “What I did was pick movies that function a little like the canon course you have to teach in political theory, like a Great Books class, movies that every time you watch them you learn something new. A lot of them are movies about constraints on freedom.”