After the ‘White Lie’ Implodes, a Rich Narrative Unfurls Lacey Schwartz, a 37-year-old Harvard Law School graduate turned filmmaker, moves with ease in circles in which her identity as both black and Jewish seems unremarkable. What makes her biography striking is that Ms. Schwartz, a woman with light brown skin and a cascade of dark curls, grew up believing she was white.

How and why that happened is the subject of her film, “Little White Lie,” which has its offical world premiere on Sunday at the San Francisco Jewish Film Festival, (after screenings at the Woods Hole Film Festival in Cape Cod and the BlackStar Film Festival in Philadelphia) and continues on the festival circuit before being broadcast on PBS next year. With Ms. Schwartz narrating, the camera travels to a funeral, girlfriend gab sessions and even her therapy appointments. At each stop, in raw conversations with family and friends, Ms. Schwartz asks over and over, how and why did she pass as white?

“I come from a long line of New York Jews,” she says early in the film, as photographs of her white relatives flash across the screen. “My family knew who they were, and they defined who I was.”

Ms. Schwartz was an only child who grew up in the mostly white town of Woodstock, N.Y. Her parents, Peggy and Robert Schwartz, told her that she favored her father’s swarthy Sicilian grandfather. It was not until she went off to college that she learned the truth.

Before starting college, “I was already questioning my whiteness because of what other people said and because I was aware that I looked different from my family,” she said in a recent interview. Then, based on the photograph accompanying her application, Georgetown University passed her name along to the black student association, which contacted her.

The university “gave me permission” to explore a black identity, Ms. Schwartz said.

After her first year, she confronted her mother, and Peggy Schwartz acknowledged that her biological father was an African-American with whom she had had an extramarital affair. Lacey Schwartz had meanwhile found acceptance among black students at Georgetown. “I genuinely experienced what it is to be black and what it is to be white,” Ms. Schwartz said.

“Little White Lie” joins a body of work by other filmmakers who have focused on hidden truths about their family trees. In the 1996 Emmy Award-winning documentary “Secret Daughter,” June Cross explores what it meant to be the biracial daughter of a white mother who sent her away to be raised by a black family. Sarah Polley explores her parents’ relationship in her 2013 film, “Stories We Tell,” and learned that she was the product of an extramarital affair. Nathaniel Kahn’s 2003 documentary, “My Architect: A Son’s Journey,” about his father, the architect Louis Kahn, was a quest to understand a man who furtively juggled three children with three different women. 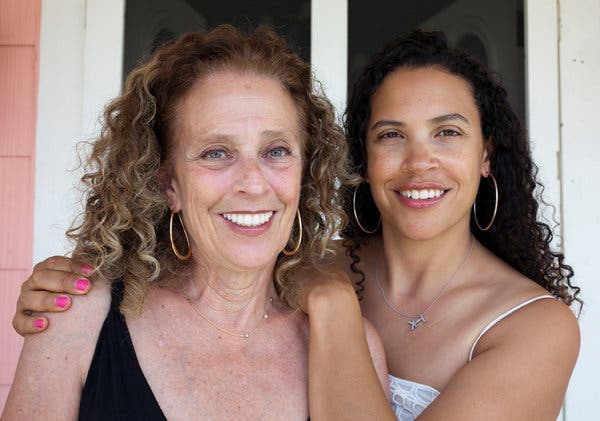 “A lot of personal documentaries cover secrets,” said Jay Rosenblatt, program director of the San Francisco Jewish Film Festival. “Self-indulgence is a big problem with personal documentaries, but I think the secret in ‘Little White Lie’ kept it from going in that direction — the narrative thrust keeps you engaged.”

Bliss Broyard explored similar territory in a memoir about her father, the book critic Anatole Broyard, a black man who passed as white. She has said she was raised white but learned the truth about her father on his deathbed. But Ms. Broyard, unlike Ms. Schwartz, grew up with her biological father.

Jenifer L. Bratter, director of the Program for the Study of Ethnicity, Race and Culture at Rice University, said the film’s twisting tale was part of “a larger story about race in America.”

“Biological race trumps cultural race,” she added. “Race is something we’re really invested in validating or comprehending. It’s about how we understand race as a marker of difference, something that a story about ancestry can’t resolve.”

Over the years, Ms. Schwartz said, strangers had challenged her whiteness. At her bat mitzvah, a synagogue member told her that it was nice to have an Ethiopian Jew in their midst.

Learning that she was biracial did not fundamentally change the way she saw herself, but it did influence how she saw the world, she said in an interview in a rambling house in Cape May, N.J., where she was vacationing with her husband, twin infant sons and mother. (Ms. Schwartz and her family live in Brooklyn.)

She added, “There are benefits to being white — for me, it’s walking into a space with a potential sense of entitlement.”

Although her parents separated when Ms. Schwartz was in high school and later divorced, making “Little White Lie” gave the whole family a way to talk after years of silence, Peggy Schwartz said. Now 67, she said she is unconcerned about being judged by viewers of the documentary.

“When I first saw the film, it was so clear to me it was Lacey’s story, and it was her right to tell the story,” she said. “I did what I did. And they can judge me, but nobody else knows what my life was like.”

Lacey Schwartz’s biological father, a family friend, died when she was 29, and Ms. Schwartz said she has remained close to her mother and to Robert Schwartz, whom she considers her father. He could not be reached for comment.

Ms. Schwartz began work on “Little White Lie” in 2006, after toying with the idea of making a film about black Jews. In 2008 she and Mehret Mandefro, a physician and an anthropologist, began a company called Truth Aid, which produces multimedia content about tackling barriers to wellbeing. Ms. Schwartz has also had experience talking about identity through her work with Be’chol Lashon, a national advocacy group for Jews of color.

Diane Tobin, the group’s founder and chief executive, has shown “Little White Lie” to young people who fall into that category and plans more screenings. Be’chol Lashom’s research indicates that by 2004, about 10 percent of the nation’s Jews had identified themselves as nonwhite, Asian, black, Latino or mixed-race. “Lacey’s story is more complex than many, but it’s a way for people to talk about their history,” Ms. Tobin said. “All identities are more permeable now, and we see young Jews who want to develop a more diverse community.”

As for Ms. Schwartz, she now finds a kind of sweet symmetry in her surname, “a clearly Jewish name that literally means black,” she says at the end of “Little White Lie.” Her tale has liberated her, she said, and she hopes it will free others.

“Can you bring your full self through that door,” she said, “or do you feel you have to leave a piece of yourself behind?”

An article on Saturday about the black filmmaker Lacey Schwartz, whose movie “Little White Lie” is about her experience growing up believing she was white, referred imprecisely to its premiere. While its official world premiere was at the San Francisco Jewish Film Festival on Sunday, it was screened earlier at the Woods Hole Film Festival in Cape Cod and the BlackStar Film Festival in Philadelphia.