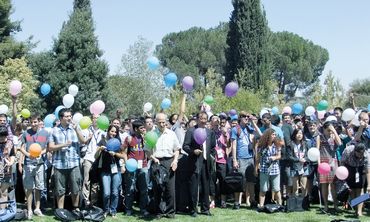 With young people in the Far East becoming a powerhouse in the sciences, Israel excelling as a start-up nation and each side not knowing much about the other, the Asian Science Camp (ASC) is being hosted in Jerusalem by the Foreign Ministry and the Science and Technology Ministry, among others.

Over 220 brilliant university students and senior high school pupils, from Asia, aged 17 to 21 have joined nearly 40 Israelis counterparts for the week-long program of lectures by world-class Israeli researchers, including Nobel Prize winners and their counterparts from Asia.

President Shimon Peres addressed the participants at the opening.

The foreigners come from Australia and New Zealand, China, India, Indonesia, Japan, Kazakhstan, Korea, Nepal, Philippines, Singapore, Sri Lanka, Thailand, Turkey, Vietnam, Taiwan, Georgian, Myanmar, Turkmenistan, Armenia and the United Arab Emirates. The Israelis include Arabs and Jews. Some of the countries represented have no diplomatic relations with Israel and are Muslim.

The idea of ASC was co-proposed seven years ago by Prof. Yuan-Tseh Lee from Taiwan, who received a Nobel Prize in chemistry in 1986, and Prof. Masatoshi Koshiba of Japan, who became a physics Nobel laureate in 2002. This year was the first the ASC is being held in Israel, where very few of the foreign participants had been before.

Many had never met a Jew – or an Israeli – before and thought it was a “dangerous place” to visit – a misconception they said became apparent within hours of their arrival.

The Foreign Ministry has dubbed 2012 “The Year of Asia” in Israel, and the government has allocated NIS 4 million for the event, which is to include tours of Jerusalem and Tel Aviv. The organizers said they wanted to “create a platform for identifying the next generation of Asian scientists and create ties of friendship through the universal language of science.”

Foreign Ministry directorgeneral Rafi Barak said “it was important for the State of Israel to create participation by as many countries as possible. The ASC conference here has more delegations and participants than ever before.”

HU president Prof. Menachem Ben-Sasson said the science camp gave his university the opportunity to host the event and deepen the positive image of Israel in academia and science and to make ties with young people who are sure to lead scientific research in their countries.

Kaito Ogiyama, an 18-yearold biology student from Tokyo Metropolitan University, said he had already begun his studies, as universities begin their first semester in April.

“All I knew about Israel was Jews and war, but nothing else. I already like the food.

We will hear what Israeli Nobel laureates have done,” he said, eating lunch at Givat Ram that included meat, vegetables and rice, served quite differently from what he was used to.

Htoo Zaeni Oo Mg, a 20- year-old electrical engineering student from Myanmar said his father is an official in his country’s department of agriculture.

“I know that Israel is very good at designing and building aircraft,” he said. “It’s a beautiful country. I had been afraid to come; some friends said Israel is dangerous. But it isn’t,” said the citizen of Myanmar, which has a population of 60 million.

Aia Bowirrat, a Hebrew-speaking Israeli Arab from a village near Um el-Fahm, has completed high school with high marks and wants to apply to the medical school at the Technion-Israel Institute of Technology in Haifa. Her father has a doctorate in neurology.

“He works in Nazareth and does research articles, and I help him,” said Aia, who has four sisters.

“The human body is fascinating. I want to be a brain surgeon,” she said. She heard about ASC two months ago, when her physics teacher recommended her.

“Sometimes I feel discrimination here, but I am not angry at Israel. Sometimes it’s frustrating, especially for Arab students. Medicine is hard enough. There are many obstacles. But I believe in myself and what I can do. I prefer to study medicine here and not go abroad,” she said.

“I have met wonderful students here; there is such a variety of cultures, but we all speak science.”
(Tags: Jews, Israel, Asians, Science)