Checking More Than One Box: A Growing Multiracial Nation

Larry Bright holds his 3-year-old son’s hand while the boy steps through a leafy playground in Silver Spring, Md., and practices counting his numbers in English.

At the top of the slide, the boy begins counting in his other language: Vietnamese.

Bright, the boy’s father, is African-American; his mother, Thien Kim Lam, is Vietnamese. The couple has two children.

“They are a perfect mix between the two of us,” Lam tells Arun Rath, host of weekends on All Things Considered. 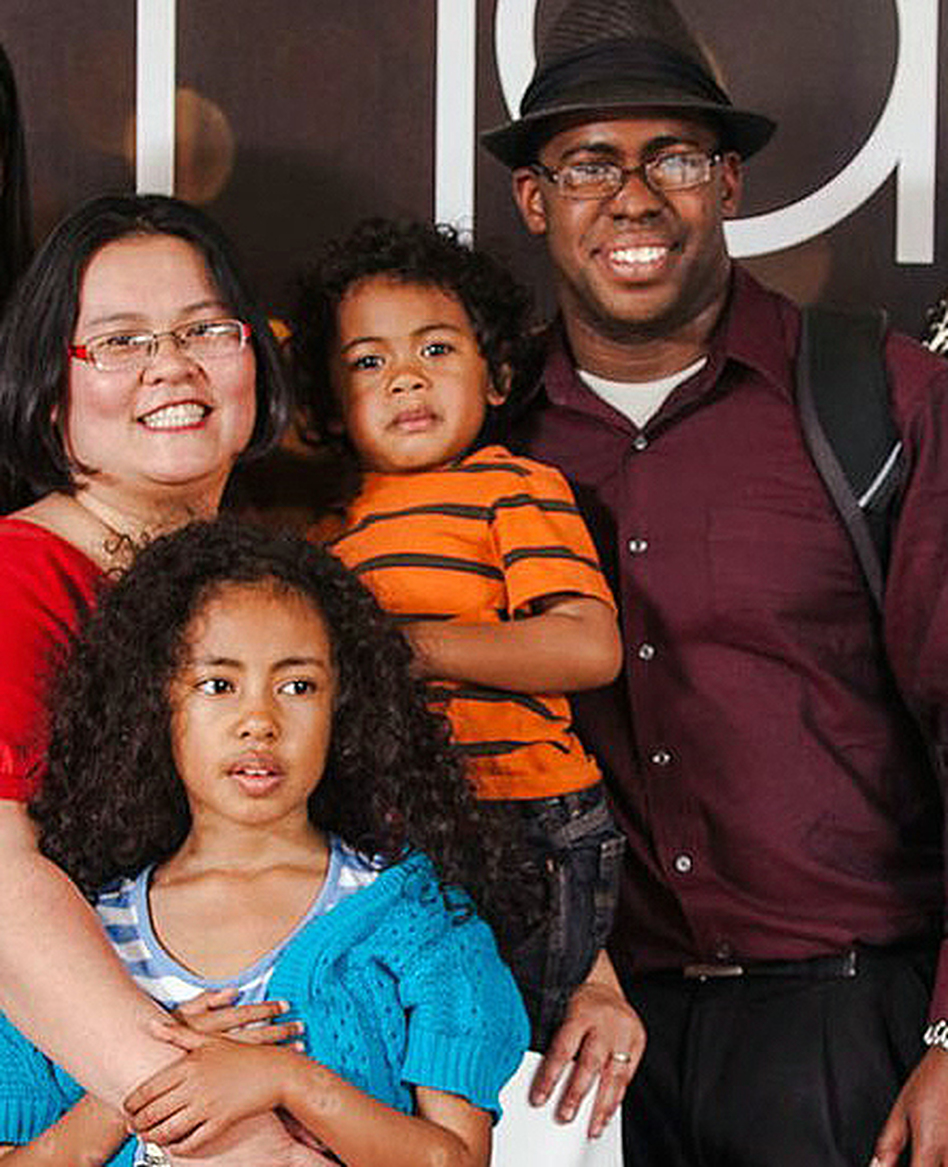 Thien-Kim Lam (left) and Larry Bright (right) with their 3-year-old son and 7-year-old daughter, are a multiracial family. They represent a growing segment of American families that are inter-racial and whose children identify as both races.

Bright and Lam’s son and 7-year-old daughter are multiracial, just two of thousands born in what’s been called a multiracial baby boom. Today, 15 percent of marriages are interracial and inter-ethnic.

Six years ago, her firstborn was just a year old, and Lam was adjusting to life as a mother.

“I didn’t have any friends with children, and I wanted to go out and meet other moms,” she says.

So she took her daughter to Ellsworth Park in downtown Silver Spring, but everyone there — mothers and nannies alike — thought Lam was her daughter’s nanny. The other mothers wouldn’t talk to her, and the nannies questioned her techniques.

The nannies would ask Lam how the family felt about her speaking to the kids in Vietnamese and if they “hired her to do that.”

It was a profound moment for Lam, and it inspired her to start a blog called I’m Not The Nanny. She was shocked by how many people experienced what she had, but she also thought it was a problem just the parents were having. That came into sharp relief when her daughter turned 2. She threw a tantrum about wanting to look like her mother, having light skin and straight hair.

“I froze because I thought, ‘What did I do wrong? I never pointed any of these things out,'” Lam says. “So that was a big lesson for me; you can’t not talk about race.”

Lam and her husband both grew up in Louisiana, where society asked them to choose between white and black. But going forward, it seems their two children will have more choices.

“I think they’ll go as multiracial; I’m trying to set a balance,” Lam says. “Teaching them their Vietnamese culture, but then I also reiterate that they’re American. That’s what makes them American; that they have this great mix of cultures.”

That mix of cultures is uniquely American, and it’s hard to ignore the growing trend that Lam and her family are a part of.

President Obama is biracial, and in media, multiracials are everywhere. More than ever, they’re touting their mixed heritage.

Comedians Keegan-Michael Key and Jordan Peele are biracial, half-black and half-white. They made their names playing black characters on MADtv. But last year, they premiered their own show, where they take on multiracial issues with glee.

But taking on such issues doesn’t always go smoothly, as music diva Beyonce discovered in a commercial for L’Oreal. In it, she declared the secret to her skin was a “mosaic of all the faces before it.” The screen flashed the phrases: “African-American. Native American. French.”

The backlash was immediate. The singer was criticized for abandoning her black identity. But the multiracial community embraced her.

It’s not just that there are more multiracial and biracial people. The government is now counting the group differently. For the first time in modern history, the 2000 Census allowed us to check off more than one box for race.

The last Census showed 9 million people, about 3 percent of the population, reporting more than one race. That’s an increase of one-third from the decade before.

“The youngest age group, kids under 5 [years old], 7 percent are identified as having more than one race group,” says Jeffrey Passel, a senior demographer at the Pew Hispanic Center. “If we look at the elderly, over 65, it’s only 1 percent.”

That means more people are choosing spouses outside their own race. The change, Passel says, comes from evolving attitudes. Over the past few decades, he says more people have simply come to view intermarriage as no big deal.

“More than two-thirds of people in our surveys, when asked how they’d feel about someone in their own family marrying someone of a different background, said they’d be fine with it,” he says.

Ask young people — those under 40 — and the number rises to more than 80 percent.

Racial identity, however, is a little more complicated than just checking a box. Passel points to research that looked at kids with one black and one white parent.

When asked at home about their racial identification, Passel says most children tended to say they were biracial or white and black. When asked at school, a much higher proportion identified as black.

Multiracial people identifying as just one race is part of a long trend. University of Southern California professor Marcia Alesan Dawkins’ father was one such man: part black and part white.

“He has lived his life as an African-American man. He lived through segregation, he lived through civil rights,” Dawkins says. “And though he acknowledges these other aspects of his identity, he sees the world from the perspective of a black man. That’s how he chooses to identify.”

But just one generation makes all the difference for Dawkins herself, who claims black, white and Latino heritage. Dawkins and her sister see the world a little differently, she says.

Despite the trend, Dawkins says it is important to remember that it is still less than 3 percent of the population that indentifies as multiracial. The overwhelming majority of Americans identify as having one race only.

“That’s not a bad thing, but we have to be really careful how we read and interpret and spin these census results,” she says.

Dawkins also says multiracials need to take some responsibility and look at how their entrance into the conversation might “disrupt — for better and for worse — resources and communities that have worked really hard to be organized.”

It’s difficult to talk about multiracials as a group, because the issues each individual faces is different. Dawkins points out that, for better or for worse, we only have the model of the black-white dynamic to work with. To advance the discussion, we may need not just new categories, but perhaps a new way to talk about race.
(Tags: Multiracial, Identity, research)